3 Simple Tools to Create Quote Posters for Your Class 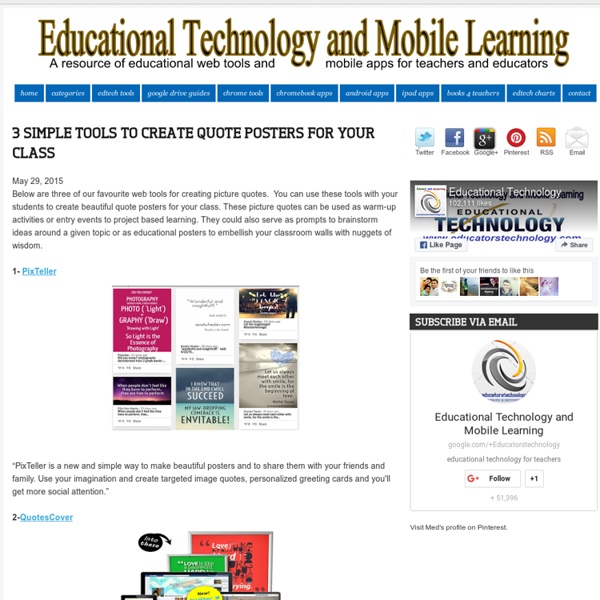 May 29, 2015 Below are three of our favourite web tools for creating picture quotes. You can use these tools with your students to create beautiful quote posters for your class. These picture quotes can be used as warm-up activities or entry events to project based learning. They could also serve as prompts to brainstorm ideas around a given topic or as educational posters to embellish your classroom walls with nuggets of wisdom. 1- PixTeller “PixTeller is a new and simple way to make beautiful posters and to share them with your friends and family. 2-QuotesCover

31-quotes-inspire-you-live-for-meaning-instead-money Is money everything that you need to make you happy? This young generation, more famously known as the Generation Y, thinks not. These teenagers and young adults prioritizes better work-life balance and flexible working rather than earning heaps of money. Ethiopian and Egyptian genomes help map early humans' route out of Africa Posted by TANNAnthropology, ArchaeoHeritage, Archaeology, Breakingnews, Early Humans, Genetics10:00 PM Although scientists are confident that all modern human populations can trace their ancestry back to Africa, the route taken out of Africa is still unclear. New genomic analyses of people currently living in Ethiopia and Egypt indicate that Egypt was the major gateway out of Africa and that migration followed a northern rather than a southern route. The findings, which appear in the American Journal of Human Genetics, add a crucial piece of information to help investigators reconstruct humans' evolutionary past.

Adobe Slate- A Great App for Creating Beautiful Visual Stories with Students August 8, 2015 Adobe Slate is an excellent free iPad app for students to use in digital storytelling.The app allows you to animate and bring to life any type of document and turn it into a beautiful visual story. Adobe Slate offers a wide range of interesting features that make it easy for students to design appealing stories without the need for any design knowledge. Some of the things Adobe Slate offers include: professionally designed lay-outs, beautiful magazine-like themes, multiple fonts and colours, call-to-action buttons and many more. Additionally, Adobe Slate is very simple and easy to use, you simply pick a lay-out, add photos and images, talk or type to add text to them and when you are done, you can share your work with others through social media websites such as Twitter and Facebook or via email or text message. You can also embed your Slate stories in your blog or website using the generated embed code

Action Quotes & Sayings (Actions Speak Louder Than Words, Activity, Movement, etc) Related Quotes Effort Goals Labor Laziness Perseverance I have always thought the actions of men the best interpreters of their thoughts. ~John Locke Well done is better than well said. ~Benjamin Franklin Between saying and doing many a pair of shoes is worn out. Out of Africa: How early humans first got to Europe A new study determined that early humans migrated out of Africa through Egypt, a finding bolstered by the discovery an almost complete skull in the Manot Cave of Israel's Western Galilee dating back 55,000 years. It provides direct anatomical evidence that fills the historic time gap of modern human migration into Europe. Clara Amit, Israel Antiquities Authority Anthropologists have long debated how early Europeans and Asians left Africa, with some arguing for a southern route via Ethiopia and others pushing a northern path through Egypt.

8 Tips to Power-Up Your Classroom Presentations Last month, I attended a Back to School Night for parents, sitting through presentation after presentation by teachers, some with slides that helped make their presentation a delight to listen to, and others . . . well, that's why I'm writing this blog post. The goal of a classroom presentation is to aid you in effectively conveying information in a way that allows students (or their parents) to remember what you said. Unfortunately, for some, the presentation becomes a crutch, and they begin to rely on the slides to tell their story, rather than to help them tell the story. I've been creating presentations using software like PowerPoint and KeyNote for 20 years, and I've learned a lot about how to most effectively communicate. Here's what I've found.

Lifelong learning should play a role in Global Citizenship Education - European Association for the Education of Adults ‘Global citizens’ are more involved in their communities and are aware of the global ties of their actions. Lifelong learning can play a crucial role in Global Citizenship Education to raise awareness of global inequalities, to foster democratic change and to empower citizens worldwide. “If you can read this, you are luckier than three billion people who cannot read or write.

Humans migrated north, rather than south, in the main successful migration from Cradle of Humankind New research suggests that European and Asian (Eurasian) peoples originated when early Africans moved north - through the region that is now Egypt - to expand into the rest of the world. The findings, published in the American Journal of Human Genetics, answer a long-standing question as to whether early humans emerged from Africa by a route via Egypt, or via Ethiopia. The extensive public catalogue of the genetic diversity in Ethiopian and Egyptian populations developed for the project also now provides a valuable, freely available, reference panel for future medical and anthropological studies in these areas. Two geographically plausible routes have been proposed for humans to emerge from Africa: through the current Egypt and Sinai (Northern Route), or through Ethiopia, the Bab el Mandeb strait and the Arabian Peninsula (Southern Route). Some lines of evidence have previously favoured one, some the other.