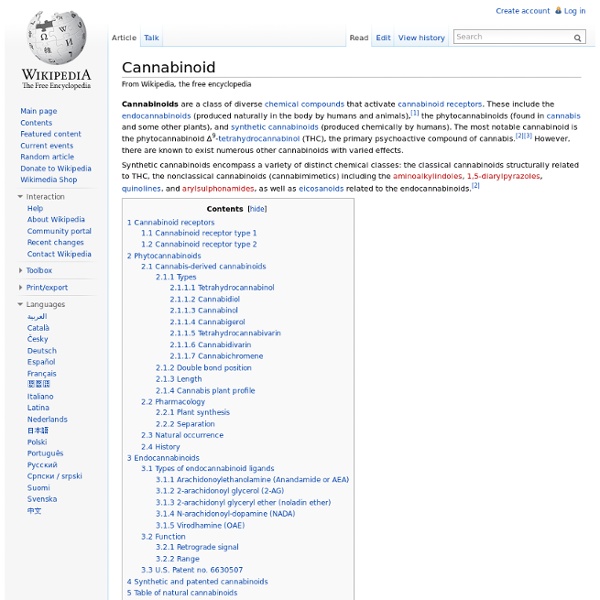 Synthetic cannabinoids encompass a variety of distinct chemical classes: the classical cannabinoids structurally related to THC, the nonclassical cannabinoids (cannabimimetics) including the aminoalkylindoles, 1,5-diarylpyrazoles, quinolines, and arylsulphonamides, as well as eicosanoids related to the endocannabinoids.[2] Cannabinoid receptors[edit] Cannabinoid receptor type 1[edit] CB1 receptors are found primarily in the brain, more specifically in the basal ganglia and in the limbic system, including the hippocampus.[1] They are also found in the cerebellum and in both male and female reproductive systems. CB1 receptors are absent in the medulla oblongata, the part of the brain stem responsible for respiratory and cardiovascular functions. Thus, there is not the risk of respiratory or cardiovascular failure that can be produced by some drugs. Cannabinoid receptor type 2[edit] Phytocannabinoids[edit] Cannabis-derived cannabinoids[edit] Types[edit] Tetrahydrocannabinol[edit] Cannabinol[edit] Related:  Psychoactive Alkaloids

Gramine Gramine (also called donaxine) is a naturally occurring indole alkaloid present in several plant species. Gramine may play a defensive role in these plants, since it is toxic to many organisms.[1] Occurrence[edit] Synthesis[edit] Despite being widely available in several plant species, gramine is far easier to synthesize directly from indole via a Mannich reaction with dimethylamine and formaldehyde. Uses[edit] Gramine is used mostly in synthetic organic chemistry as a starting material for tryptophan syntheses. All reactions of gramine follow the same general reaction scheme. Toxicity[edit] The LD50 of gramine is 44.6 mg/ kg iv in mice and 62.9 mg/ kg iv in rats.[5] Numerous studies have been done on the toxicity in insects harmful to crops for use as a possible insecticide.[6] Gramine is a norepinephrine reuptake inhibitor in synaptic vesicles. References[edit]

Psilocybin Psilocybin[nb 1] (/ˌsɪləˈsaɪbɪn/ SIL-ə-SY-bin) is a naturally occurring psychedelic compound produced by more than 200 species of mushrooms, collectively known as psilocybin mushrooms. The most potent are members of the genus Psilocybe, such as P. azurescens, P. semilanceata, and P. cyanescens, but psilocybin has also been isolated from about a dozen other genera. As a prodrug, psilocybin is quickly converted by the body to psilocin, which has mind-altering effects similar (in some aspects) to those of LSD, mescaline, and DMT. History[edit] Early[edit] Modern[edit] Albert Hofmann (shown here in 1993) purified psilocybin and psilocin from Psilocybe mexicana in the late 1950s. Two diethyl analogs (containing two ethyl groups in place of the two methyl groups) of psilocybin and psilocin were synthesized by Hofmann: 4-phosphoryloxy-N,N-diethyltryptamine, called CEY-19, and 4-hydroxy-N,N-diethyltryptamine, called CZ-74. Occurrence[edit]

Cannabis Etymology The word cannabis is from Greek κάνναβις (kánnabis) (see Latin cannabis),[4] which was originally Scythian or Thracian.[5] It is related to the Persian kanab, the English canvas and possibly even to the English hemp (Old English hænep).[5] In modern Hebrew, קַנַּבּוֹס qannabōs modern pronunciation: [kanaˈbos] is used but מַעֲלֶה עָשָׁן maʿăleh ʿāšān modern pronunciation: [ma.aˈle aˈʃan] (smoke bringer) is the ancient term. Old Akkadian qunnabtu, Neo-Assyrian and Neo-Babylonian qunnabu were used to refer to the plant meaning "a way to produce smoke."[6][7][8] Description Cannabis is an annual, dioecious, flowering herb. The leaves have a peculiar and diagnostic venation pattern that enables persons poorly familiar with the plant to distinguish a Cannabis leaf from unrelated species that have confusingly similar leaves (see illustration). Micrograph sativa (left), indica (right) Taxonomy Top of Cannabis plant in vegetative growth stage Early classifications 20th century

Anandamide §History[edit] Anandamide was isolated and its structure first described in 1992 by W. A. Devane, Lumír Hanuš et al. who were working in a team led by Raphael Mechoulam at the Hebrew University of Jerusalem.[1] §Physiological functions[edit] Anandamide has been shown to impair working memory in rats.[7] Studies are under way to explore what role anandamide plays in human behavior, such as eating and sleep patterns, and pain relief. Anandamide is also important for implantation of the early stage embryo in its blastocyst form into the uterus. Anandamide plays a role in the regulation of feeding behavior, and the neural generation of motivation and pleasure. A study published in 1998 shows that anandamide inhibits human breast cancer cell proliferation.[12] Some studies have linked anandamide release as a mechanism of analgesic effects induced by exercise, particularly by running.[13] In 1996, researchers discovered anandamide in chocolate. §Synthesis and degradation[edit] §See also[edit]

beta-Carboline β-Carboline (9H-pyrido[3,4-b]indole) also known as norharmane is a nitrogen containing heterocycle. It is also the prototype of a class of compounds known as β-carbolines. Pharmacology[edit] β-Carboline alkaloids are widespread in plants and animals, and frequently act as benzodiazepine inverse agonists. As components of the liana Banisteriopsis caapi, the β-carbolines harmine, harmaline, and tetrahydroharmine play a pivotal role in the pharmacology of the indigenous psychedelic drug ayahuasca by preventing the breakdown of dimethyltryptamine in the gut by inhibiting monoamine oxidase, thus making it psychoactive upon oral administration. Structure[edit] Examples of β-carbolines[edit] Some of the more important β-carbolines are tabulated by structure below. Occurrence in nature[edit] Eight plant families are known to express 64 different kinds of β-carboline alkaloids. See also[edit] References[edit] Jump up ^ Venault P, Chapouthier G (2007). External links[edit]

Psilocin Psilocin (also known as 4-OH-DMT, psilocine, psilocyn, or psilotsin), is a substituted tryptamine alkaloid and a serotonergic psychedelic substance. It is present in most psychedelic mushrooms together with its phosphorylated counterpart psilocybin. Psilocin is a Schedule I drug under the Convention on Psychotropic Substances.[2] The mind-altering effects of psilocin are highly variable and subjective and resemble those of LSD and DMT. Chemistry[edit] Psilocin and its phosphorylated cousin, psilocybin, were first isolated and named in 1958 by Swiss chemist Albert Hofmann. Psilocin is relatively unstable in solution due to its phenolic hydroxy (-OH) group. Structural analogs[edit] Sulphur analogs are known with a benzothienyl replacement[4] as well as 4-SH-DMT.[5] N1-methylpsilocin is a functionally 5-HT2C receptor preferring agonists.[6] 4-fluoro-N,N-dimethyltryptamine is known.[6] O-Acetylpsilocin is an acetylized analog of psilocin, also known as 4-AcO-DMT. Pharmacology[edit]

Marijuana (Weed) History and Facts People around the world have been smoking marijuana for thousands of years while also using the hemp plant for everything from fabric and rope to ethanol fuel. Unfortunately, somewhere along the way, a man with a bit of power and enough determination decided pot was wicked, evil and narcotic. He moved mountains to make it illegal worldwide. Between 1937 and 1947, the government spent $220 million on the war against drugs. First Fabric Known to Man The hemp plant, also called cannabis or marijuana, has been used around the world for thousands of years. Cannabis Seeds Used as Food Around 6000 BCE hemp seeds were used as food in China. Cannabis is Cultivated and Left as an Offering In 1500 BCE Scythians started to cultivate cannabis for weaving cloth. "Sacred Grass" Named One of Five Sacred Plants in India Cannabis is called "Sacred Grass" in the Hindu sacred text Arthava-Veda and named one of the five sacred plants of India. Hemp Use Spreads Throughout Europe Marijuana Comes to the New World

Ergotamine Ergotamine is an ergopeptine and part of the ergot family of alkaloids; it is structurally and biochemically closely related to ergoline. It possesses structural similarity to several neurotransmitters, and has biological activity as a vasoconstrictor. It is used medicinally for treatment of acute migraine attacks (sometimes in combination with caffeine). Medicinal usage of ergot fungus began in the 16th century to induce childbirth, yet dosage uncertainties discouraged the use. It has been used to prevent post-partum haemorrhage (bleeding after childbirth). It was first isolated from the ergot fungus by Arthur Stoll at Sandoz in 1918 and marketed as Gynergen in 1921.[4] Mechanism of action[edit] Biosynthesis[edit] Drug uses[edit] Ergotamine produces vasoconstriction peripherally as well as damages the peripheral epithelium. Ergotamine continues to be prescribed for migraines. Availability and dosage[edit] See also[edit] References[edit]

Toke of the Town - Study: Marijuana Doesn't Affect Driving Performance ​It's something most seasoned pot smokers already know, but still it's nice to get more scientific confirmation: Marijuana doesn't make you wreck your car. Subjects show almost identical driving skills just before and just after smoking marijuana, according to a study published in the March issue of the Journal of Psychoactive Drugs. ​Investigators from Hartford Hospital in Connecticut and the University of Iowa Carver College of Medicine measured the simulated driving performance of 85 people in a double-blind, placebo controlled trial. Volunteers responded to various simulated events associated with auto crash risk, such as avoiding a driver who was entering an intersection illegally, deciding to stop or go through a changing traffic light, responding to the presence of emergency vehicles, avoiding colliding with a dog who entered into traffic, and maintaining safe driving during a secondary (in-the-car) sound distraction. More links from around the web!

Nicotine In smaller doses (an average cigarette yields about 1 mg of absorbed nicotine), the substance acts as a stimulant in mammals, while high amounts (50–100 mg) can be harmful.[5][6][7] This stimulant effect is likely to be a major contributing factor to the dependence-forming properties of tobacco smoking, nicotine patches, nicotine gum, nicotine inhalers and liquid nicotine vaporizers.[citation needed] According to the American Heart Association, nicotine addiction has historically been one of the hardest addictions to break, while the pharmacological and behavioral characteristics that determine nicotine addiction are similar to those determining addiction to heroin and cocaine. The nicotine content of popular American-brand cigarettes has slowly increased over the years, and one study found that there was an average increase of 1.78% per year between the years of 1998 and 2005. This was found for all major market categories of cigarettes.[8] Psychoactive effects[edit] Medical uses[edit]