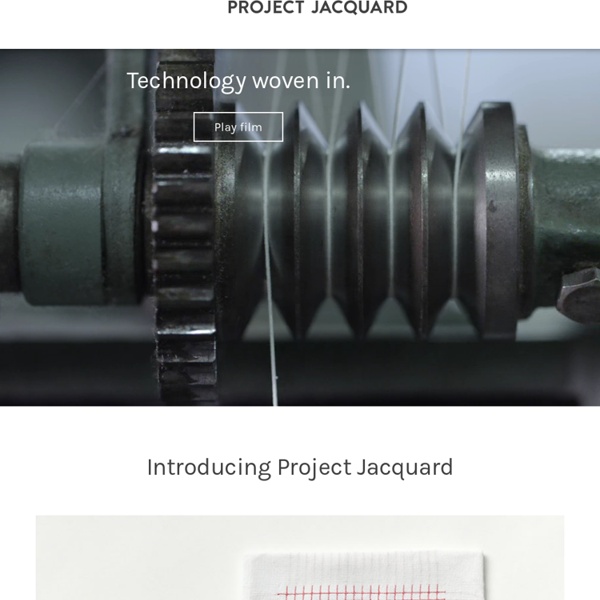 Pauline van Dongen's "Ruff" is a 3D-Printed Collar With a Life of Its Own Ruff is a new 3D printed responsive collar by Pauline van Dongen, who is pushing the forefront of wearables. Working with architect Behnaz Farahi, the two crafted flexible wearables that can move on their own with the help of nitinol and a small electric signal. Inspired by historic fashions of ruffled collars from 16th and 17th centuries, this 3D printed wearable is a look into how fashion can help us interact through movement.

Robots Get a Grip on Meat and Vegetables It is less striking than Deep Blue’s victory over chess champ Garry Kasparov, but Richard van der Linde says that his robotic hand’s mastery at picking up cabbage is something of a milestone for machines. With the aid of five cameras, plus sensors in its wrist to monitor the resistance it encounters, the three-fingered gripper can carefully pick up a cabbage, reorient it, and place it into a machine that removes the core. “In industry, only humans can do that at the moment,” says van der Linde. His company Lacquey, based in Delft, the Netherlands, is working with FTNON, a manufacturer of food-processing equipment, to get the technology ready to go to work inside the giant chillers where today humans process cabbage, lettuce, and other produce for packaging. ­Lacquey is also testing versions for other sorts of jobs, such as packaging tomatoes, peppers, and mangoes.

Ralph Lauren's 'smart' shirt is the ultimate preppy tech Ralph Lauren's sensor-laden shirts are finally coming to the masses — provided the masses are willing to cough up $295 for a workout shirt. At a preview event today in New York City, the lifestyle brand revealed pricing and availability for its long-in-the-works PoloTech apparel, made in collaboration with Montreal-based tech startup OmSignal. The "second-skin" fabric workout shirt has silver fibers woven directly into the fabric and a small, sensor-filled black box that snaps into the shirt near the rib cage, to track biometric stats like steps taken, heart rate, breathing depth, and energy exertion. Ralph Lauren first showed off the biometric shirt at last year's US Open tennis tournament, using ball boys as its lab rats. One top-ranking player, Marcos Giron, wore the smart shirt during practice as well.

Superhuman Vision Now Possible Thanks To Bionic Lenses The promise of superhuman vision has always seemed a little far fetched, something us mortals have only ever experienced through the eyes of Clark Kent. At best, those of us who wear contact lenses or glasses hope for a surgery-free breakthrough that will one day give us 20/20 vision. A Canadian optometrist Dr Garth Webb however, claims that he has produced a Bionic Lens would help us see three times better than 20/20 vision. Step aside superman. Dr.

What We Do — FashTech FashTech® aims to drive creative partnerships between fashion and technology start-ups and provide a platform for the latest innovations to be showcased to leading brands and retailers. Since February 2014, we began revolutionizing the fashion technology world; one event at a time. First London, then spreading to San Francisco, and now our latest project - FashTech NYC which launched this September. With over 10,000 members in the FashTech community, with interests spanning from wearable technology, to e-commerce and even 3D body scanning: 2014 was an interesting year for fashion tech with 2015 looking to be bigger and better! We aim to provide a platform for startups and leverage creative partnerships for fashion tech creativity, with our guests at the events ranging from start-ups, investors and of course fashion tech fanatics. No matter how big or small the company, anyone can showcase at the events.

Technology review: Adidas miCoach There is no hiding place on the football ground any more. Adidas has come up with an app that takes a scrupulous note of your performance during training sessions or games without the drill sergeant theatrics. Linking with a device in your boot, the app records just about everything you do in a game, from the distance covered over the 90 minutes to the top speed you hit, and even the amount of time you spent inactive.

Bionic lens promises SUPERHUMAN sight three times better than 20/20 The Ocumetics Bionic Lens was created by Canadian Dr Garth WebbSurgery to implant the lens into the patient's eye takes eight minutesIt is folded into a syringe in a saline solution and placed in an eyeOnce it has unravelled - within about 10 seconds - the vision is corrected By Victoria Woollaston for MailOnline Published: 13:53 GMT, 21 May 2015 | Updated: 07:41 GMT, 26 May 2015 From glasses to standard lenses and even lasers, there are many ways people can restore or correct their vision. But the latest so-called 'bionic' lens promises to not only restore sight, it claims it can boost it to three times better than 20/20. And surgery to insert the lens takes just eight minutes, with sight being restored in seconds.

Brooke Roberts Sarah Simpson is a lawyer focused on technology at Taylor Vinters, London. It was while presenting at the inaugural FashTech conference in London that we happened to meet this incredible woman. Having taken a great interest in Brooke's presentation, Sarah met Brooke after the event. Since then she has become our go to person for all things legal within the creative and technology realms. Always professional and open minded, she has become an invaluable member of the team and we were overjoyed when she agreed to not only star in a photo shoot at the Taylor Vinters office at Tower 42, but also agreed to be interviewed for our blog. We met up with Sarah at Tower 42 in London for the shoot and styled Sarah in our Maurits dress.

How Wearables Could Influence Mobile Advertising Having read with great interest over the past few weeks a number of different articles on the role of wearable technology in marketing, I wanted to take the opportunity to share my thoughts on what’s happening with wearables in another fast growing area of digital marketing: mobile. Much like wearables, mobile is still seen by some as a new kid on the block. But while mobile fought to have a presence on media plans in the beginning, in the last 18 months the industry has turned a corner. Mobile ad spend in the UK now accounts for over one fifth (23%) of all digital advertising, according to the IAB UK’s 2014 figures. This change is being driven by proliferation – smartphone penetration will hit 2.89 billion globally by 2017 according to the GSMA – and by usage – many reports estimate that consumers now look at their mobile screens up to 220 times a day. Brands can’t afford to miss out on the mobile opportunity.

Dior creates its own virtual reality headset Dior offers the ultimate immersive experience with backstage access to its latest runway show thanks to Dior Eyes, its new virtual reality headset. Packed with cutting-edge technology, the headset was designed entirely by Dior’s own workshops. Faithful to the superb quality craftsmanship for which its couture workshops are renowned, Dior conceived Dior Eyes, an ultra-immersive virtual reality headset packed with state-of-the-art technology. The headset is equipped with high-definition image resolution and integrated holophonic audio, creating a 3D immersion into the backstage world at a fashion show, including the sensation of 360° vision, letting visitors move about in the virtual universe. For the launch experience, Dior lifts the curtain on its latest ready-to-wear show.

FabTextiles Seamless: Digital Fabrication jacket uses a variety of digital and analog tools. With the use of digital computing and fabrication methods we are able to rapidly prototype and assemble new designs. You can use any 2D or 3D software to create patterns ready for cutting. The machines allow a us a wide range of possibilities, so try to take advantage of the accuracy, precision, and repetitions these machines can achieve. If you don’t have them, these tools can be found at your local Fab Lab, tech shop, or digital fabrication laboratory (if you don’t have them at home, and aside from the laser cutter, you probably will) book a time slot for fabrication with your local fablab or tech shop. Recomended Tools & Materials: