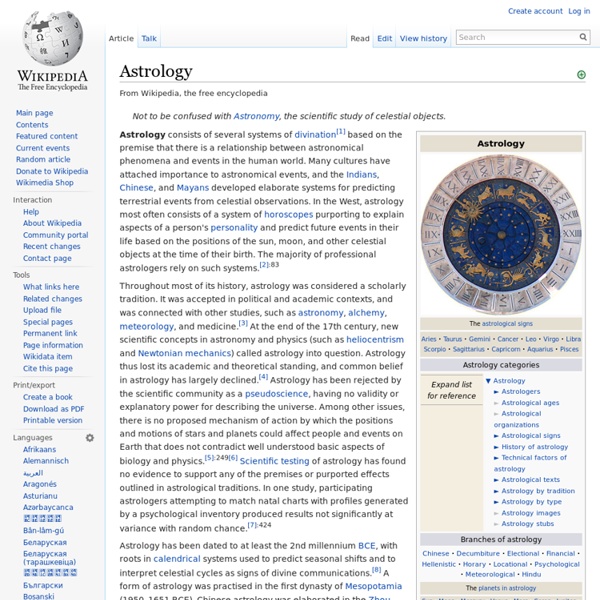 Not to be confused with Astronomy, the scientific study of celestial objects. Astrology consists of several systems of divination[1] based on the premise that there is a relationship between astronomical phenomena and events in the human world. Many cultures have attached importance to astronomical events, and the Indians, Chinese, and Mayans developed elaborate systems for predicting terrestrial events from celestial observations. In the West, astrology most often consists of a system of horoscopes purporting to explain aspects of a person's personality and predict future events in their life based on the positions of the sun, moon, and other celestial objects at the time of their birth. The majority of professional astrologers rely on such systems.[2]:83 Throughout most of its history, astrology was considered a scholarly tradition. Etymology[edit] Marcantonio Raimondi engraving, 15th century History[edit] Throughout most of its history, astrology was considered a scholarly tradition.

Astrology Love and Sex Secrets - Venus and Mars We can learn a lot about ourselves and others through an exploration of positions, placements, and aspects in astrology birth (natal) charts. Love and sex are areas of our lives that intrigue us all. There are specific things to look for in astrology that will help shed light on individual temperaments, preferences, and styles. At Cafe Astrology, we offer a wide variety of articles on these highly charged topics: Venus: Venus, the goddess of love, reveals much about the way we approach relationships, romance, and love.

What Watch - Why Astrology ? Why do the stars influence my life? What's a planet "doing" that it has such a profound impact on me? Any astrologer has heard these questions many times, and probably has asked himself the same question once and again.

How to Read Your Own Birth Chart - Astrology The most important thing to remember while interpreting any birth chart is: synthesis. The whole chart must be taken as a whole. A natal chart abounds with bits and pieces of information about an individual. Each separate bit must be synthesized into one whole picture of the person. What we mean is that you cannot take one piece of the chart (for example, Mercury in Sagittarius) and decide that it defines the entire person. If you do that, you will, undoubtedly, be in error. Babylonian astrology Early origins[edit] Babylonian astrology was the first organized system of astrology, arising in the second millennium B.C.[1] There is speculation that astrology of some form appeared in the Sumerian period in the 3rd millennium BC, but the isolated references to ancient celestial omens dated to this period are not considered sufficient evidence to demonstrate an integrated theory of astrology.[2] The history of scholarly celestial divination is therefore generally reported to begin with late Old Babylonian texts (c. 1800 B.C.), continuing through the Middle Babylonian and Middle Assyrian periods (c. 1200 B.C.).[3] By the 16th century B.C. the extensive employment of omen-based astrology can be evidenced in the compilation of a comprehensive reference work known as Enuma Anu Enlil. Its contents consisted of 70 cuneiform tablets comprising 7,000 celestial omens. Divinatory basis[edit]

Your Birthday, Your Tree and their meanings (wowzone.com) WOW Poetry, lyrics, music, stories, classics, Wish Only Well Find your birthday and its corresponding tree. Then, see the meaning behind it below. Do you recognize yourself? APPLE TREE (the Love) - of slight build, lots of charm, appeal, and attraction, pleasant aura, flirtatious, adventurous, sensitive, always in love, wants to love and be loved, faithful and tender partner, very generous, scientific talents, lives for today, a carefree philosopher with imagination. ASH TREE (the Ambition) - uncommonly attractive, vivacious, impulsive, demanding, does not care for criticism, ambitious, intelligent, talented, likes to play with fate, can be egotistic, very reliable and trustworthy, faithful and prudent lover, sometimes brains rule over the heart, but takes partnership very seriously.

Hindu astrology Jyotisha (or Jyotish from Sanskrit jyotiṣa, from jyótis- "light, heavenly body") is the traditional Hindu system of astronomy and astrology. It is also known as Hindu astrology, Indian astrology, and more recently Vedic astrology. The term Hindu astrology has been in use as the English equivalent of Jyotiṣa since the early 19th century, whereasVedic astrology is a relatively recent term, entering common usage in the 1980s with self-help publications on Āyurveda or Yoga. Vedanga Jyotisha are one of the earliest writings about astrology and astronomy within Vedas.[1][2][3] Historical documentation suggests horoscopic astrology in the Indian subcontinent was a Hellenic influence post-dating the Vedic period.[4] It has been divided into three main branches:[5] Astrology has been debated in India.