Lesson plans and resources for your SMART Board - SMART Exchange 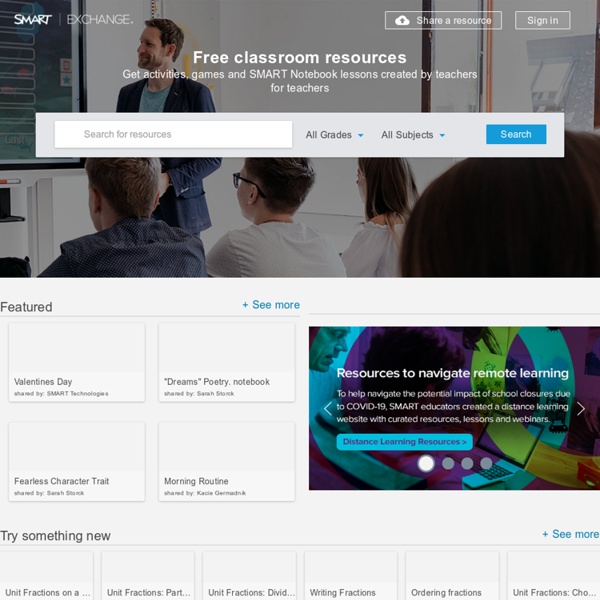 Teaching with Smartboard Brainteasers -- Rebus Puzzles (Word Picture Puzzles), NIEHS Kids Page Scientists get to solve puzzles every day, because science and research involve finding solutions from the clues that we are given. Just like with brainteasers (or brain teasers) and riddles, the answers to science mysteries are not always easy to see at first. With time and effort, they eventually become clear. But before solving the hundreds of brainteasers and riddles below, why not learn more about your brain by viewing the parts of the brain and what they do. Palindromes A palindrome is a word, phrase, verse, or sentence that reads the same backward or forward. Not So Hard Riddles Warm up with some easy riddles. Tuff Stuff Riddles Some of these riddles are difficult Rebus Puzzles Word picture puzzles Frog Leap Brainteaser Help six little frogs get across their pond. Puzzling Proverbs New twists on old sayings Puzzling Numbers Numbers games Double-Speak Proverbs These old sayings have been rewritten using big words.

Smartboard Lessons, Activities, Games - iSmartboard.com Constitution and Watergate Background When Richard Nixon resigned in 1974 in the wake of the Watergate scandal, it was only the second time in our history that impeachment of a President had been considered. Nearly every action taken with regard to the case had some constitutional significance. It is two pages of a three-page memorandum written for the Watergate Special Prosecutor in August 1974, after Richard Nixon resigned the Presidency and before President Ford pardoned him. The Office of the Special Prosecutor was created by Executive Order in May 1973 and twice faced the question of whether to seek an indictment of Richard Nixon. President Nixon was named an "unindicted coconspirator" at that time because Watergate Special Prosecutor Leon Jaworski advised the grand jury that in his opinion a sitting President could not be indicted. The House Judiciary Committee pursued its constitutional mandate and drew up five articles of impeachment, three of which they approved in the summer of 1974. The Document Page 1

Crickweb Make your own word search puzzle You can use this page to create your own word search puzzle with your own list of words. These puzzles are popular with different groups of people, especially teachers and students. Please enter a set of words. When you are done, hit the "Make Puzzle" button to generate a word search puzzle. Once the puzzle is displayed, you can use the "Printable HTML" or "Printable PDF" buttons to get a clean page suitable for printing with your web browser. The puzzle that is generated will remain on this server for about two months. Some users list their puzzles for all to see. If you want help with international characters, you can call up an Alphabet chart to use for cutting and pasting letters that are hard to type. Some people find this word list form too small, or want to have hidden words. Over the years, I've received many messages from students, teachers, and parents who have used the program for school work as well as a way to give a pleasant diversion from the normal grind.

Tableau blanc interactif (TBI): communauté de ressources Welcome to the Math League InterTNI English Language Centre Study Zone: Welcome! About the Study Zone The Study Zone is for students of the English Language Centre (ELC) at the University of Victoria. ELC teachers create the English language lessons and practice exercises. News and Feedback We occasionally post news on the Study Zone blog and we're happy to receive comments on the blog's Feedback Page. Who visits Study Zone? This map shows the visitors to this page only. What do I do? First, choose your level. Study Zone is made up of levels. Where am I now? The menu at the top of each page tells you where you are.