This Comic Will Forever Change the Way You Look at Privilege 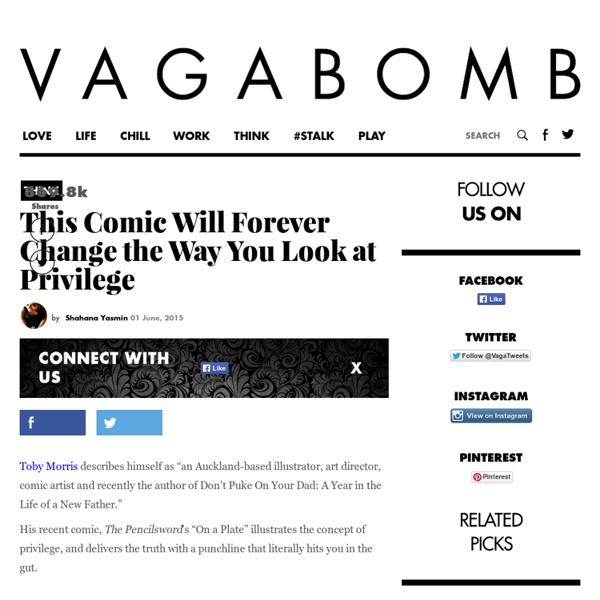 This Comic Will Forever Change the Way You Look at Privilege Toby Morris describes himself as “an Auckland-based illustrator, art director, comic artist and recently the author of Don't Puke On Your Dad: A Year in the Life of a New Father.” His recent comic, The Pencilsword's “On a Plate” illustrates the concept of privilege, and delivers the truth with a punchline that literally hits you in the gut. He places two individuals side by side, showing how financial security and benefits, or the lack of it, affects them even if they come from households that love and support them, leading to two completely different outcomes. Source: Thewireless Read the rest of the comic on The Wireless here. Let's hope this comic changed your mind about privilege, the way it did ours. This comic first appeared here, and is the property of Toby Morris and The Wireless. (H/T: The Wireless)

Why Calvin and Hobbes is Great Literature ‹ Literary Hub On the Ontology of a Stuffed Tiger and Finding the Whole World in a Comic “To an editor,” Bill Watterson, the creator of Calvin and Hobbes, wrote in 2001, “space may be money, but to a cartoonist, space is time. Space provides the tempo and rhythm of the strip.” The strip follows Calvin, a blonde six-year-old American that Watterson named after the founder of Calvinism. Calvin and Hobbes feels so inventive because it is: the strips take us to new planets, to parodies of film noir, to the Cretaceous period, to encounters with aliens in American suburbs and bicycles coming to life and reality itself being revised into Cubist art. I’ve always loved the way that the best books—including comics—change as we do. Jeanette Winterson on How Artificial Intelligence Will Change the Way We Live and Love Auto 240p 720p 480p 360p 240p I’ve gotten more into comics as I’ve grown older, but Calvin and Hobbes is the one that has stayed with me from childhood to adulthood. “Everything familiar has disappeared!