INFOGRAPHIC: A world of languages - and how many speak them 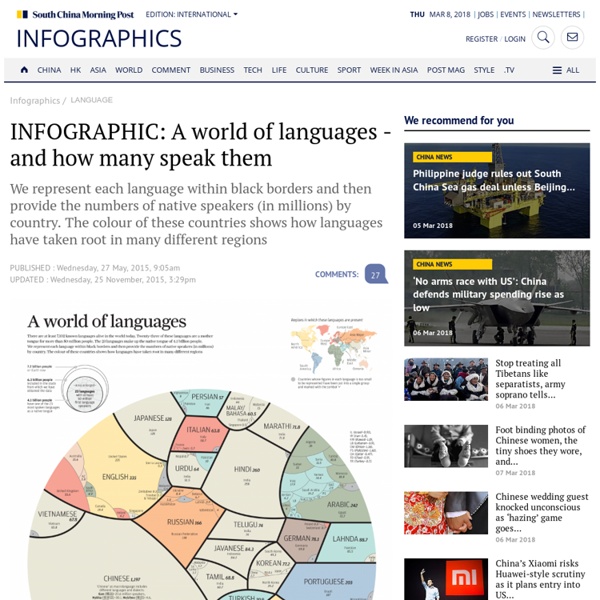 Fascinating Chart Details The History of the Alphabet Most of us use the letters of the alphabet everyday, but did you ever stop to wonder how their shapes came to be? The history of the alphabet is fascinating, and each of the 26 letters has its own unique story. Matt Baker (of UsefulCharts) has designed a handy poster that documents the evolution of our familiar alphabet from its ancient Egyptian Proto-Sinaitic roots (c. 1750 BCE) up to present day Latin script. The limited edition Evolution of the Alphabet chart shows how early shapes and symbols eventually morphed to become the ABCs we know today. While some letters are recognizable quite early on, others have little resemblance at all. The letter “A” for example, began as an Egyptian hieroglyphic that looks like an animal head with horns.

Which fossil fuel companies are most responsible for climate change? – interactive Turn autoplay off Edition: <span><a href=" Beta About us Population Lines Print I recently produced a map entitled “Population Lines”, which shows population density by latitude. The aim was to achieve a simple and fresh perspective on these well-known data. I have labelled a few key cities for orientation purposes but I’ve left off most of the conventional cartographical adornments. I am really pleased with the end result not least because it resembles Joy Division’s iconic Unknown Pleasures album cover, which in itself is a great example of data visualisation as art.

Why Chinese Is So Damn Hard (简体字：为什么中文这么TM难？) (繁體字：為什麼中文這麼TM難？) The first question any thoughtful person might ask when reading the title of this essay is, "Hard for whom?" A reasonable question. Most popular infographics generalized Log in or Become a Member Job Opening Digital Designer, Editorial Content for Bauer Media Discrimination and poor job prospects hit children of immigrants 2/7/2015 - The children of immigrants continue to face major difficulties integrating in OECD countries, especially in the European Union, where their poor educational outcomes leave many struggling to find work, according to a new OECD/EU report. Indicators of Immigrant Integration 2015: Settling In finds that youth with immigrant parents experience nearly 50% more unemployment in the European Union than those with native-born parents. The OECD/EU report presents the first detailed international comparison of the outcomes of immigrants and their children in all European Union and OECD countries. The indicators cover key dimensions of integration, including employment, education, income, housing, health, civic engagement and social cohesion. A special focus is on young people with a migration background. In both the EU and the OECD, the immigrant population has grown by more than 30% since 2000.

Apple Product Design: 35 Years of Consumer Electronics [INFOGRAPHIC] When it comes to industrial design, few consumer electronics or computer makers have the legacy or influence of Apple, Inc. In the last 35 years, Apple has introduced a myriad of products and devices, some very successful, some, not so much. Artist Mike Vasilev created this infographic for Mashable, highlighting the major Apple product releases and design changes from 1976 through 2011. With rumors of the iPhone 5, iPhone 6 and a smaller, lower-cost iPhone all spreading through the technosphere, we feel certain that at least one more item will be added to the "redesign" list before 2011 closes out.

Which countries have the most equal LGBT laws? Mexico has become the latest country to effectively legalise same-sex marriage, after the country’s Supreme Court issued an opinion ruling that it is unconstitutional for states to define marriage as a union only between a man and a woman. It follows last month’s referendum in Ireland, which saw an overwhelming majority vote in favour of amending its constitution to allow gay and lesbian couples to marry. According to the the International Lesbian, Gay, Bisexual, Trans and Intersex Association’s latest report, a total 18 countries around the world now recognise full same-sex marriage, with a further 16 offering another form of union such as a civil partnership. At the other end of the LGBT rights scale, 75 countries still criminalise same-sex sexual acts between consenting adults – down from 92 countries in 2006.

How speaking multiple languages benefits the brain - Mia Nacamulli Amazed by what you have learned about having a bilingual brain? Then, start learning another language now! This website has tons of free lessons, games and quizzes to get you started! The HTML5 Experiments of Hakim El Hattab Experiments This is my creative lab and interactive playground. It's focused on the exploration of interaction, visual effects and technologies. Flipside Flipside A Global Middle Class Is More Promise than Reality From 2001 to 2011, Nearly 700 Million Step Out of Poverty, but Most Only Barely By Rakesh Kochhar Updated August 13, 2015: This new edition includes corrected estimates for Iceland, Luxembourg, the Netherlands and Taiwan, and some related aggregated data. The first decade of this century witnessed an historic reduction in global poverty and a near doubling of the number of people who could be considered middle income. But the emergence of a truly global middle class is still more promise than reality. In 2011, a majority of the world’s population (56%) continued to live a low-income existence, compared with just 13% that could be considered middle income by a global standard, according to a new Pew Research Center analysis of the most recently available data.

List of English terms of venery, by animal This is a list of English-language terms of venery (venery being an archaic word for hunting), comprising terms from a tradition that arose in the Late Middle Ages, at least partly from the Book of Saint Albans of 1486, a historic list of "company terms". The present list also includes more common collective terms (such as "herd" and "flock") for some animals. Standard terms for particular groups are listed first in each group and shown in bold.

Visualizing HDI: a fine D3 exemplar This interactive visualisation of Human Development Index values, by country and over time, was released last week. For me, it follows in the mould of The State of Obesity, but is much more transparent in how it is constructed when you look at the source code. That makes it a good exemplar — in fact, perhaps the exemplar currently available — for introducing people to the possibility of making interactive dataviz for their research projects. Oh for those early days of D3, when nobody was terribly fluent with it, and websites would have all the code right there, easy to read and learn from.