HOW TO: Jump-Start Your Career by Becoming an Online Influencer 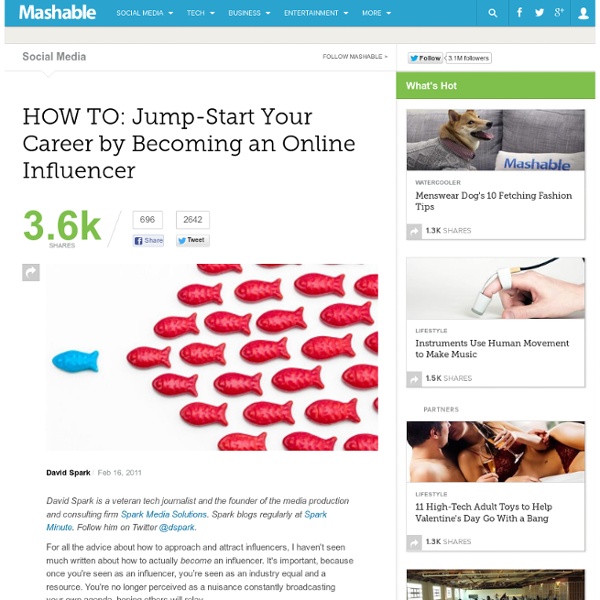 David Spark is a veteran tech journalist and the founder of the media production and consulting firm Spark Media Solutions. Spark blogs regularly at Spark Minute. Follow him on Twitter @dspark. For all the advice about how to approach and attract influencers, I haven't seen much written about how to actually become an influencer. It's important, because once you're seen as an influencer, you’re seen as an industry equal and a resource. You're no longer perceived as a nuisance constantly broadcasting your own agenda, hoping others will relay. Being an influencer yourself is an often overlooked way to engage with other influencers. Always wanted to be an influencer but didn't know where to start? 1. Whether it’s a blog, podcast, YouTube channel, or an endless Twitter stream, you absolutely must be a content producer. 2. Failing to be an influencer is often the result of conceding the title of "industry influencer" to someone else. 3. 4. Warner has had similar experiences. 5. 6. 7. 8. 9.

Top Prospect Connects with LinkedIn to Turn Your Talented Friends into Cash The American labor market is as schizophrenic as I’ve ever seen it. While the bulk of the country struggles with 9% unemployment, in Silicon Valley the ease of starting a new company and huge hiring goals of companies like Google and Facebook have lead to a war for talent that’s driving up salaries and threatening the future of some smaller startups who just can’t find people. The latter may seem like a good problem to have, but it’s still a problem. And it’s one most Valley companies are happy to throw money at if someone can come up with a tailored solution. We’ve written about a few companies trying to solve this through networking or reputation. Eventually, Top Prospect will take a cut of that– probably a hefty cut of up to 40%. If a big ol’ payday isn’t enough incentive, Top Prospect also makes it easy. It takes all of five minutes to create an account and see a list of jobs, people you know who might be a fit and the bounty you’d get should they be hired.

Contract Killer When times get tough, it can often feel like there are no good people left in the world, only people who haven’t yet turned bad. These bad people will go back on their word, welch on a deal, put themselves first. You owe it to yourself to stay on top. But you’re a professional, right? You’re a good guy. Think again chump. Maybe you’re a gun for hire, a one man army with your back to the wall and nothing standing between you and the line at a soup kitchen but your wits. It was exactly ten years ago today that I first opened my doors for business. If signing a contract I didn’t fully understand made me a stupid son-of-a-bitch, not asking my customers to sign one just makes me plain dumb. Writing a killer contract If you are writing a contract between you and your customers it doesn’t have to conform to the seemingly standard format of jargon and complicated legalese. Your killer contract should cover: NB: The specific details of this killer contract work for me and my customers. Copyrights

How To Get Promoted It would be safe to say that you would have probably entertained the question of how to get promoted even before you graduated or left school. In my chats with juniors from my industry, I am often asked this question which I gladly answer. However, I sense they simply want short cuts to the next level. These experiences pushed me to pen these 9 obvious but often not practiced tips on how to get promoted. Start internalizing these tips and make them part of your career plan. Before you know it, you would have moved up to the next level. One main reason for people to ignore these obvious practices on how to get promoted is because they seem very long term. PLAN1. Are there any weaknesses that you really need to correct before the next promotion is possible? 2. Now that you have written this down, how do you plan to get that promotion? ATTITUDE3. They believe in themselves and they believe in the bigger goals of their unit or department and company. 4. 5. ACTION6. 7. 8. 9.

Free copywriting contract - download now | John McGarvey - web copywriter When I started out, I didn’t have any kind of copywriting contract for my clients to sign. But after a few months of relying on informal, emailed proposals, I felt I needed something more official. Yes, contracts are boring, dull, tedious and generally unenjoyable. But they are important. They explain exactly what each party in a business relationship should expect – and what they have to do. Here’s my copywriting contract for free Most contracts I’ve encountered are written using lots of legalese and can be very confusing. This seemed like a great starting point, so I grabbed it and made some pretty substantial changes. I received a lot of really helpful feedback while working on this. What you need to know about my copywriting agreement Feel free to download my copywriting agreement and use it however you like. You can change it any way you want. Oh – and this is important: I’m not a legal professional, so get your legal eagles to examine it properly if you decide to use it. Scope creep.

Message de Jacques-Edouard Charret, président groupe Quick, sur le restaurant Quick Avignon Cap Sud (9) When a Co-Worker Steals an Idea When a Co-Worker Steals an Idea Rachel Zupek, CareerBuilder.com writer You're sitting in a meeting, minding your own business, when one of your colleagues makes a suggestion. As you jot down notes, you realize that his proposal sounds vaguely familiar, but don't know why. Wait a second: He stole your idea! Co-workers stealing ideas in the workplace is more common than you think. "Colleagues take credit from others because they think they probably can get away with it," she says. How to deal with itWhy a colleague steals an idea is not as important as how you react when you realize it's happening. "Part of planning a project should be planning who needs to know about your ideas and how they should learn about it," she says. Other experts say that unless there is a really good reason not to, confronting the credit appropriator is the best route to take -- as long as you do it in a non-accusatory manner. 1. 2. 3. 4. 5.

Steal Like an Artist: 10 Things Nobody Told You About Being Creative: Austin Kleon: 9780761169253: Amazon.com 12 Ways to Use Quora For Your Job Search Looking for a job in social media or the tech space? You probably already have a LinkedIn account and maybe even Twitter. If you're really serious about personal branding, you might even have your own Facebook Page. Where else can you build your personal profile and showcase your expertise? Why not Quora, the online question and answer community? Here are 12 ways to use Quora as a platform to build your reputation, establish your expertise and get on the radar of recruiters and company execs for potential employment. 1. Quora provides plenty of places where you can summarize your expertise including your main bio and Topic Bios, based on your experiences around a particular topic. 2. When you join Quora, the site populates your account with some suggested followers to get you started, based partly on your own contacts if you access the site through Facebook, Twitter or e-mail. 3. Identify the key players connected with companies you've targeted as places where you'd like to work. 4. 5.