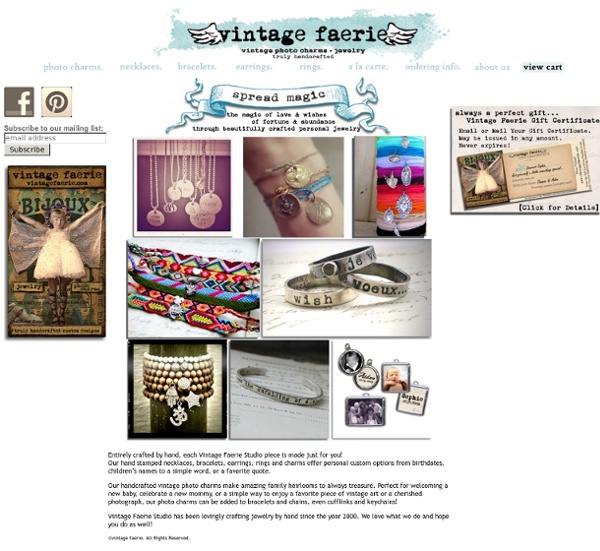 Entirely crafted by hand, each Vintage Faerie Studio piece is made just for you! Our hand stamped necklaces, bracelets, earrings, rings and charms offer personal custom options from birthdates, children’s names to a simple word, or a favorite quote. Our handcrafted vintage photo charms make amazing family heirlooms to always treasure. Perfect for welcoming a new baby, celebrate a new mommy, or a simple way to enjoy a favorite piece of vintage art or a cherished photograph, our photo charms can be added to bracelets and chains, even cufflinks and keychains! Vintage Faerie Studio has been lovingly crafting jewelry by hand since the year 2000. We love what we do and hope you do as well!

Paul Cadden's Hyperrealistic Drawings Made with Graphite and Chalk Paul Cadden is a Scottish-born hyperrealist artist who creates painfully realistic artworks using only graphite and chalk. I’ve posted some pretty realistic drawings in the past, like Rajacenna’s detailed celebrity portraits, Juan Francisco Casas’ photo-like ballpoint pen drawings, or Paul Lung’s pencil artworks, but the pieces you’re about to see are on a whole other level. Using simple materials like graphite and white chalk, Paul Cadden is able to replicate complex photos down to the tiniest details. Whether it’s the countless wrinkles on an old man’s face, the smoke from a lit cigarette or the water dripping from someone’s face, he makes it look unbelievably realistic. “Although the drawings and paintings I make are based upon a series of photographs, video stills etc, the art created from the photo is used to create a softer and much more complex focus on the subject depicted, presenting it as a living tangible object. via Deviant Art

100 Amazing Hairstyles We women adore fashion and style. Fashion comes in clothes, shoes, makeup, fancy accessories, styles the way we carry things and hairstyles. We enjoy dressing up, getting ready and styling our hair. Hair is the part of fashion and beauty and Hair-styling is an art, to carry your hair according to your style statement and your physical appearance is a really tough job.

Video: The Contortionist Eager to master the arm balance? Equinox’s Briohny Smyth shows there’s no limit to what the artfully honed yoga body can do. Tuesday, January 03, 2012 | Q Editors Why are we all so terrified of-slash-mesmerized by-slash-obsessed with the yoga arm balance? - StumbleUpon Midnight in Paris Woody Allen’s latest places starving writer Owen Wilson in Paris with his fiancée, Rachel McAdams. Searching for inspiration for his incomplete novel, Owen begins taking strolls around the city at night where he discovers an unexpected group of people.

Portraits of Dogs as They Shake Off Water For her series “Shake“, pet photographer Carli Davidson photographed curious portraits of dogs shaking off water. Use a fast shutter speed and you can capture all kinds of strange expressions on your dog’s face. You can find the rest of the photographs in the series here. Shake (via Photojojo) Image credits: Photographs by Carli Davidson and used with permission Good Horror Movies Every Fan Has To See If you ask people on the street for some suggestions of a great horror movie, odds are you'd get a wide range of answers. You’d get everything from the scariest slasher film to horror comedies and even b-rated horror movies that barely classify for the genre. Because we all have a different capacity for being scared and our own unique reasons for watching horror films, we of course have varying tolerances for gore and suspenseful movies[2].

1000 novels everyone must read: the definitive list Selected by the Guardian's Review team and a panel of expert judges, this list includes only novels – no memoirs, no short stories, no long poems – from any decade and in any language. Originally published in thematic supplements – love, crime, comedy, family and self, state of the nation, science fiction and fantasy, war and travel – they appear here for the first time in a single list. Feel we've left off a crucial book? I’d SNAP at the chance to be your Valentine! Here is a free Valentine download for you if you dare (lots of cutting, folding, gluing….) First download and print out an alligator and inside of mouth Cut out pieces

The free five minute personality test! Your Existing Situation "Inclined to choose luxurious things, which are gratifying to the senses. Turned off by things which are tacky and tasteless." Your Stress Sources