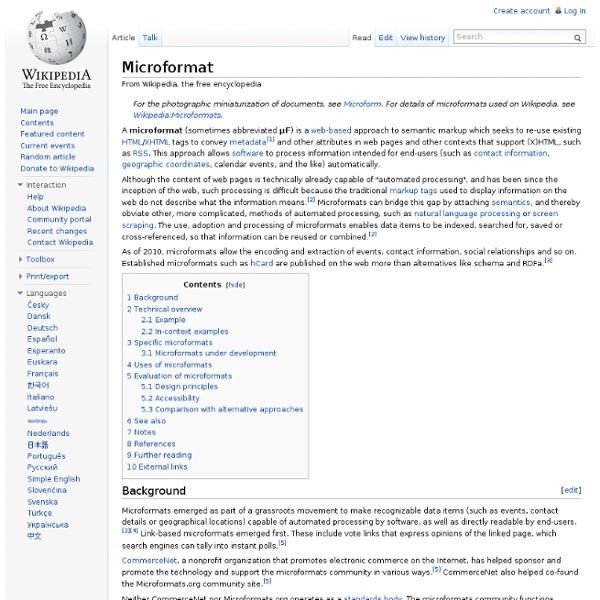 A microformat (sometimes abbreviated μF) is a web-based approach to semantic markup which seeks to re-use existing HTML/XHTML tags to convey metadata[1] and other attributes in web pages and other contexts that support (X)HTML such as RSS. This approach allows software to process information intended for end-users (such as contact information, geographic coordinates, calendar events, and similar information) automatically. Although the content of web pages is technically already capable of "automated processing", and has been since the inception of the web, such processing is difficult because the traditional markup tags used to display information on the web do not describe what the information means.[2] Microformats can bridge this gap by attaching semantics, and thereby obviate other, more complicated, methods of automated processing, such as natural language processing or screen scraping. Background[edit] Neither CommerceNet nor Microformats.org operates as a standards body. class rel

Microdata (HTML) Microdata is a WHATWG HTML specification used to nest metadata within existing content on web pages.[1] Search engines, web crawlers, and browsers can extract and process Microdata from a web page and use it to provide a richer browsing experience for users. Search engines benefit greatly from direct access to this structured data because it allows search engines to understand the information on web pages and provide more relevant results to users.[2][3] Microdata uses a supporting vocabulary to describe an item and name-value pairs to assign values to its properties.[4] Microdata is an attempt to provide a simpler[citation needed] way of annotating HTML elements with machine-readable tags than the similar approaches of using RDFa and microformats. Microdata vocabularies provide the semantics, or meaning of an Item. The following HTML5 markup may be found on a typical “About” page containing information about a person: Here is the same markup with added Schema.org[5][6][7] Microdata:

Semantic Web The Semantic Web is a collaborative movement led by international standards body the World Wide Web Consortium (W3C).[1] The standard promotes common data formats on the World Wide Web. By encouraging the inclusion of semantic content in web pages, the Semantic Web aims at converting the current web, dominated by unstructured and semi-structured documents into a "web of data". The Semantic Web stack builds on the W3C's Resource Description Framework (RDF).[2] According to the W3C, "The Semantic Web provides a common framework that allows data to be shared and reused across application, enterprise, and community boundaries".[2] The term was coined by Tim Berners-Lee for a web of data that can be processed by machines.[3] While its critics have questioned its feasibility, proponents argue that applications in industry, biology and human sciences research have already proven the validity of the original concept. History[edit] Purpose[edit] Limitations of HTML[edit] Semantic Web solutions[edit]

OpenURL ContextObject in SPAN (COinS) Citation microformat efforts This wiki page outlines the overall effort to develop a citation microformat per the process. We are documenting current examples of cites/citations on the web today, their implicit/explicit schemas, and current cite/citation formats, with the intent of creating a citation microformat based on that research. Example Citations Citation Examples are citations found in the wild that could benefit from semantic mark-up. Known Citation Formats The Citation Formats Page will be a running tab of known formats for publishing citations. It could be useful to create a chart of how each value from the implicit schema determined by the citation-examples is represented in each format, and what formats have additional properties that do not map between them. Brainstorming citation-brainstorming Issues The citation-issues page is intended to capture ongoing issues. To Do Modularity This microformat should be developed as a module that can be used in other microformats. References Informative References Copyright