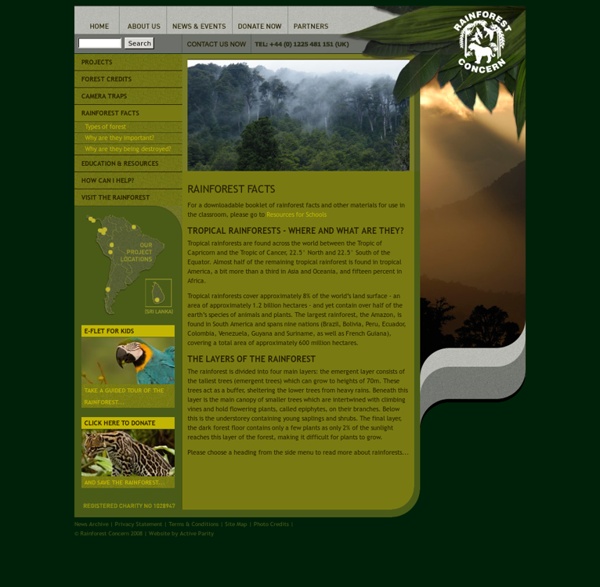 For a downloadable booklet of rainforest facts and other materials for use in the classroom, please go to Resources for Schools Tropical rainforests - where and what are they? Tropical rainforests are found across the world between the Tropic of Capricorn and the Tropic of Cancer, 22.5° North and 22.5° South of the Equator. Almost half of the remaining tropical rainforest is found in tropical America, a bit more than a third in Asia and Oceania, and fifteen percent in Africa. Tropical rainforests cover approximately 8% of the world’s land surface - an area of approximately 1.2 billion hectares - and yet contain over half of the earth’s species of animals and plants. The LAYERS OF THE RAINFOREST The rainforest is divided into four main layers: the emergent layer consists of the tallest trees (emergent trees) which can grow to heights of 70m. Related:  Rainforests • katiemakesthings

Rainforest Animals DIY Stylish 'Wood' Wall Storage System The idea of this striking DIY wall storage system belongs to a dynamic design duo Kathleen Hackett and Stephen Antonson. It’s based on using of cardboard tubes, looks really chic and is quite flexible. Materials and tools Two four-foot-tall cardboard tubes, one measuring 10 inches wide and the other 12 inches wideContact paperWashers, bolts, plastic anchors, screws1-2 inch wood planksBracesJigsawDrillUtility knife Instructions Cut each cardboard tube into smaller tubes of varying heights using a jigsaw.Cover the outside of each tube you got with contact paper. Enjoy your modern and stylish wall storage system that is designed to accomodate your things. Tropical rainforest A tropical rainforest is an ecosystem type that occurs roughly within the latitudes 28 degrees north or south of the equator (in the equatorial zone between the Tropic of Cancer and Tropic of Capricorn). This ecosystem experiences high average temperatures and a significant amount of rainfall. Rainforests can be found in Asia, Australia, Africa, South America, Central America, Mexico and on many of the Pacific, Caribbean, and Indian Ocean islands. Overview[edit] Tropical rainforests can be characterized in two words: hot and wet. Tropical rainforests are among the most threatened ecosystems globally due to large-scale fragmentation as a result of human activity. History[edit] Tropical rainforests have existed on Earth for hundreds of millions of years. Types of tropical rainforest[edit] Several types of forest comprise the general tropical rainforest biome: Forest structure[edit] Forest floor[edit] The forest floor, the bottom-most layer, receives only 2% of the sunlight. Canopy layer[edit]

List of misquotations - Wikiquote This page consists of things that many people think are correct quotations but are actually incorrect. This does not include quotations that were actually blunders by the people who said them (see, e.g., Wikipedia:Political gaffe). See also: Quotations on misquotation. Misquoted or misattributed[edit] "If you have an apple and I have an apple and we exchange these apples then you and I will still each have one apple. "All we want are the facts, ma'am." "All we know are the facts, ma'am." "That's right," said Billy Windsor. "Elementary, my dear Watson, elementary," murmured Psmith. Unsourced, unverified, or other best guesses[edit] These may not necessarily be misquotations but catchphrases from popular culture, whose formation required slight alterations to put them into context and make them memorable. "Whenever I hear the word 'culture' I reach for my revolver." "A million surplus Maggies are willing to bear the yoke;And a woman is only a woman, but a good Cigar is a Smoke." People[edit]

NASA: Earth Observatory Temperature 20°C to 25°C, must remain warm and frost-free Precipitation 2,000 to 10,000 millimeters of rain per year Vegetation Vines, palm trees, orchids, ferns Location Between the Tropic of Cancer and the Tropic of Capricorn Other There are two types of rainforests, tropical and temperate. Example: Campa Pita, Belize Description There are two types of rainforests, tropical and temperate. The tropical rainforest is a hot, moist biome where it rains all year long. Tree Encyclopedia Trees have three principle features that distinguish them from all other plants. First, they have a woody stem, roots and branches which do not die back in winter, but continue to grow year after year. From the moment of its germination, a tree remains visible; from the tallest Sequoia to the smallest garden fruit tree, this principle of growth remains constant. Trees live longer than any other organism on earth. Pando (Latin for “I spread”), aka “the trembling giant,” is a clone colony of male quaking aspen, (Populus tremuloides) a single living organism identified by identical genetic markers. Trees have been living on Earth for more than 370 million years, and today can be found almost everywhere from the Arctic Circle to the Sahara Desert. Family Aceraceae: Maples are some of our most familiar and beloved trees. NASA thoughtfully provides instructions on constructing a helicopter out of paper: “Maple seeds are superb autorotating helicopters. Family Magnoliaceae – Magnolia.

Rainforest - Reference Rainforests are forests that get a great deal of rain and have extremely diverse wildlife. Rainforests are found in the tropical regions across the Southern Hemisphere, and contain more than 50% of all living species on Earth. Rainforests typically get an average of 1,850mm of rain every year. There are two main types of rainforest habitat, which are the tropical rainforests, and the seasonal rainforests. In fact, the rainforests have a total of 170,000 of the world’s 250,000 known plant species (no less than 68%), according to this infographic about the rainforest. Due to the fact that rainforests all over the world are being cut down, a great amount of effort is now being put into protecting these indigenous tribes by governments, charities and international organisations. The tropical rainforest tends to have various layers of canopy, with the top layer often reaching up to 75 meters in height. There are different animals and plants inhabiting the different rainforest types.

melted crayon art all images via Meg Duerksen how amazing is this!? found this DIY and photos on Whatever by Meg Duerksen. i have to make one of these! so easy! all you need is: a white canvashot glueblow dryera couple boxes of wax crayons do it: pick your colors and glue the crayons to the top of the canvas – tips facing downheat up the crayons to their melting point with a blow dryer set hot and highwatch the art come alive

Amazon Rainforest Macaws Macaws Macaws are large colourful parrots. They live high in the trees, feeding on fruit and nuts, which they crack with their powerful bills. Macaws feeding › Black caiman Black caiman Caimans are relatives of crocodiles and alligators. Crocodiles and alligators › Giant otter Giant otter The giant otter grows up to 1.7m (5ft) in length. Giant otter › Toco toucan Toco toucan Toucans are known for their large, colourful beaks, which they use to pick fruit. Toucans › Pacas are expert swimmers. Capybara Capybara The capybara is the world’s largest rodent. Capybara › Green iguana Green iguana Most lizards are meat-eaters, but the iguana eats plants. What is a reptile? Piranha Piranha Piranhas are meat-eating fish with strong jaws and sharp teeth. Piranhas › Harpy eagle Harpy eagle This powerful eagle preys on monkeys and sloths, grabbing them from the branches with its strong talons. Eagles › Howler monkey Howler monkey These leaf-eating monkeys live in the treetops. Howler monkeys ›

Creative Ways to Repurpose & Reuse Old Stuff Clever and creative ways to repurpose and transform ordinary objects into useful stuff… Bottles Into Pendant Lamps | Via Wine Bottles Into Chandelier | Via Drum Kit Into Chandelier Designer: ludwigmetals | Via: JJ’sRedHots Credit Cards Into Guitar Picks | Via Credit Cards Into Guitar PicksLightbulbs Into Oil Lamps | Sergio Silva Wrenches Into Wall Hooks | Via CD Spindle Into Bagel Holder | Via Bicycle Into Sink Stand | Via Bike Wheel Into Clock | Via Glove Into a Chipmunk | Photos by Miyako Toyota | Happy Gloves Old TV Into Aquarium | Via Pop Tabs Into Bag | Via Spoons Into Lamp | Via Old Piano Into Bookshelf | Via Hangers Into Room Divider | Via Tennis Rackets Into Mirrors | Via Bowlers Into Lamps | Via Old Books Into Shelves | Via Chair Into Shelf/Closet Unit | Via Vintage Suitcase Into Chair | Via Old Ladder Into Bookshelf | Via