5 Steps to Reinvent Yourself 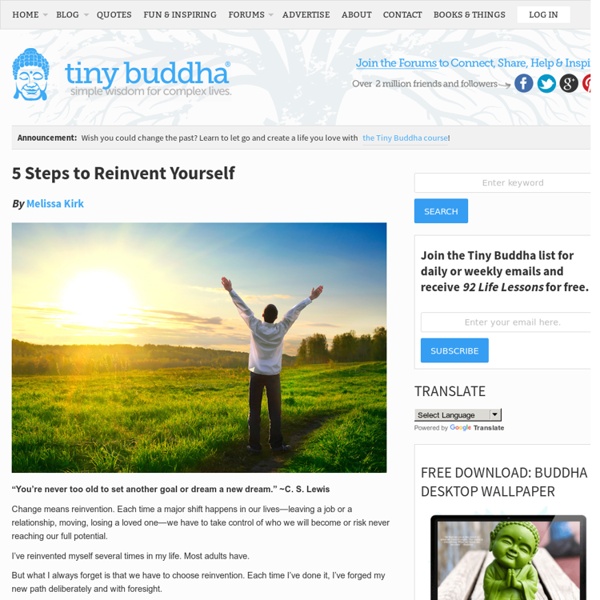 “You’re never too old to set another goal or dream a new dream.” ~C. S. Lewis Change means reinvention. Each time a major shift happens in our lives—leaving a job or a relationship, moving, losing a loved one—we have to take control of who we will become or risk never reaching our full potential. I’ve reinvented myself several times in my life. But what I always forget is that we have to choose reinvention. When I’ve waited for my future to find me, I’ve waited in vain, lost in confusion and sadness, or I’ve gotten tangled up in a situation I didn’t want. One morning, after struggling for months with grief and loss, I woke up and realized that I was having so much trouble moving forward partly because I had no idea what it was that I wanted to move toward. That morning, I woke with a vision: a crowd of people from the life I needed to leave behind with the sun rising opposite them and me standing between the two, the sun beating down on my face. 1. 2. 3. 4. 5. About Melissa Kirk

THERE’S NO PAINLESS WAY TO KILL YOURSELF Altucher Confidential Posted by James Altucher I gave my 11 year old daughter important advice the other day: there’s no painless way to kill yourself. “What about with a gun?” she said. I told her about a friend of mine who shot himself in the mouth. He put the gun in his mouth and pointed upwards towards the brain. He missed. He shot off half his face, he went blind in one eye, and he is now in a wheelchair. If you type in “I Want to Die” into google, my website is the first result. My first business I sold for $15 million. Mobb Deep would hang out in my office. Then I saw that kids in junior high school were learning HTML. I bought an apartment for millions. Then I started more companies. From June 2000 until September, 2001 I probably lost $1 million a month. I couldn’t stop. I wanted to be loved. Writing this now I even feel like slitting my wrists and stomach. I felt like I was going to die. I lost all my friends. There were no jobs, There was nothing. I tried meditation to calm down but it didn’t work.

3 Words That Guarantee Failure People who fail to achieve goals almost always signal their intent to fail by using three little words: "I will try..." There are no three words in the English language that are more deceptive, both to the person who says them and the person who hears them. People who say "I will try" have given themselves permission to fail. No matter what happens, they can always claim that they "tried." People who hear "I will try" and don't realize what it really means are fooling themselves, by thinking there's a chance that the speaker will actually succeed. People who really and truly achieve goals never say "I will try." Instead, they always say "I will do" something–or, better yet, "I must do" whatever the task is. As a wise (though fictional) guru once said: "Do, or do not.

Two Lists You Should Look at Every Morning - Peter Bregman by Peter Bregman | 11:00 AM May 27, 2009 I was late for my meeting with the CEO of a technology company and I was emailing him from my iPhone as I walked onto the elevator in his company’s office building. I stayed focused on the screen as I rode to the sixth floor. I was still typing with my thumbs when the elevator doors opened and I walked out without looking up. Then I heard a voice behind me, “Wrong floor.” I looked back at the man who was holding the door open for me to get back in; it was the CEO, a big smile on his face. The world is moving fast and it’s only getting faster. So we try to speed up to match the pace of the action around us. But that’s a mistake. Never before has it been so important to say “No.” It’s hard to do because maybe, just maybe, that next piece of information will be the key to our success. A study of car accidents by the Virginia Tech Transportation Institute put cameras in cars to see what happens right before an accident.

Top 10 Things That Determine Happiness | MintLife Blog | Personal Finance News & Advice photo: meddygarnet Happiness is, by nature, a subjective quality with a definition like a moving target. There is scant evidence — qualitative or quantitative — to lend convincing support to those life variables most critical in determining individual happiness, which is likely why past researchers committed to the scientific method rarely tried to tackle the subject. This is changing. While we’re not entirely convinced of this marriage between science and subjectivity, we can still offer up a top 10 of things that determine human happiness, as supported by this growing body of research. No.10 – Having a short memory Are you one to hold grudges? No.9 – Exacting fairness According to a recently published study in the prestigious journal Nature, people derive more happiness from scenarios and situations that result in a perceived fairness for everyone involved, even when this fairness goes against self-interest or comes at some personal cost. No.8 – Having lots of friendships No.2 – Good genes