Yacht Style! What Everyone’s Wearing Off the Red Carpet 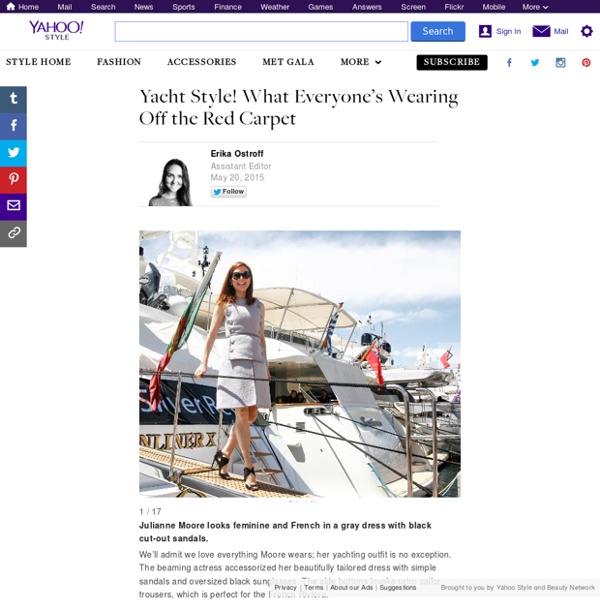 Chelsea Clinton to publish first book New York (AFP) - In a unique position as the child of one, and potentially two, US presidents Chelsea Clinton stepped up her growing public profile Wednesday by announcing publication of her first book. Her foray into the world of non-fiction will be "It's Your World," a treatise for young readers on some of the world's most pressing problems and what they can do to help. It will be published by an imprint of Penguin Young Readers on September 15, 2016 just weeks before the next US presidential election when mother Hillary will be hoping to follow Bill into the White House and become the country's first woman president. Under the sub-heading "Get Informed, Get Inspired and Get Going!" the book will address issues such as poverty, homelessness, hunger, access to education, gender equality, health, climate change and endangered species, Clinton and Penguin announced. Educated at the universities of Stanford, Columbia and Oxford, the 35-year-old mother of one has had a busy career.

The Best Summer Dresses For Every Budget By Ana Colon & Rachel Besser Summertime, and the living’s easy — and, preferably pants-less. We got the culottes out of our system during the spring. Now, we’re ready to ditch the leg constraints altogether before the solstice. Related: J.Crew’s New Designer Collabs Are Here, & They’re SO Pretty To make sure you’re ready for everything the next few months will throw at you, we rounded up the biggest dress trends you need to know about this summer. The Lace-Up DressAll strapped in and ready to go. Gucci Lace-Up Denim Mini Dress, $1995, available at NET-A-PORTER. Related: This Instagram Of Top Models Is So Bad, It’s Good Save on your Car Insurance Extra points if you pair this with classic lace-ups. Pixie Market Denim Lace Up Tunic, $62, available at Pixie Market. The Safari ShirtdressWhere in the world is Carmen Sandiego? Burberry London Longsleeve Safari Shirtdress, $1495, available at Shop Bazaar. Related: Chic Travel Outfits That Don’t Sacrifice Comfort BlackBerry® LeapTM available now at TELUS.

Celebs Are Being Paid Lots of Money to Wear Jewels That Are Worth Lots of Money It’s no secret that the Cannes Film Festival (where glitz rules and high heels are reportedly mandatory on the red carpet), is a major marketing opportunity for luxury brands. In fact, jeweler Chopard thought the film festival was so key to its strategy, it apparently wrote checks totaling over $1 million to ensure that 11 stars, like Julianne Moore and Lupita Nyong’o, would wear the company’s baubles during the festivities. Yes, if you’re an A-List, of-the-moment actress or model, a company will loan you diamonds or emeralds worth hundreds of thousands of dollars and pay you six figures for the pleasure of “collaborating” on the event. So common is the practice of paying stars to don jewels during awards season, “7/10 of the nominees and presenters are paid for at least one or more of the items they are wearing [on the] red carpet,” says Matthew Berritt, Director at EVINS Communications, a leading luxury PR firm, based in New York. Find a Card In 30 Seconds! The Truth About Glucosamine

GoPro Helmet Cam Records Death of Two BASE Jumpers Dean Potter, one of two men killed BASE jumping. (Photo: Dean Potter/Facebook) Images from a helmet camera may reveal what went wrong when two men wearing wingsuits and attempting an illegal cliff jump at Yosemite National Park crashed to their deaths, a park official said. Video of the deadly stunt from a GoPro camera mounted on the helmet of renowned climber Dean Potter shows his friend Graham Hunt hit the ridge first, said Mike Gauthier, the park’s chief of staff. He said Potter swooped left, possibly trying to avoid his partner, but hitting the rocks a split second later. Related: Woman Admits Leaving Baby to Die on Cruise Ship “It could have been an evasive maneuver,” Gauthier told the San Francisco Chronicle in a Tuesday report ( The Truth About Europe Franklin Templeton Sponsored The two men jumped at dusk Saturday from Taft Point, 3,500 feet above the valley floor. $569 & up -- London Weeklong Summer Trip w/Air “In this!

With Amal Clooney, We Finally Have the Consummate Feminist Superhero. Let’s Not Ruin It. (Photo: XPX/Star Max/Getty Images) By Heather Havrilesky Every time we glimpse her, Amal Alamuddin Clooney is bored. Related: 25 Famous Women on Female Friendship Free Mobile Device Insurance It’s no secret that Americans have been looking for their own version of royalty to swoon over for years now. But before Suri could come of age, there was Amal Alamuddin, the barrister with a heart of gold and a head of luxurious black hair rising like a phoenix from the smoldering flames of countless unfit Yankee royals. Find a Card In 30 Seconds! Just look at what she’s done to George Clooney, reducing our American prince to the status of adorable sidekick, like an animated chameleon or snowman who provides comic relief and gentle chuckling in between his master’s courageous adventures in saving the world. Related: In Conversation with Anna Wintour She’s not wrong about that. Never Miss a Delivery Again Related: 25 Famous Women on Getting Older

Cruise Ship Freed From Bermuda Reef After Running Aground In this photo provided by the Royal Gazette, the Norwegian cruise ship Norwegian Dawn, lies aground near Bermuda’s North Channel Tuesday, May 19, 2015. (Photo: AP) The Norwegian Cruise Line ship that ran aground in Bermuda was finally freed on Tuesday, six and a half hours after it was stuck on a reef while trying to leave the island. The ship is still not fully operational and the 2,675 passengers and 1,062 crew members remain in Bermuda. Inspectors boarded the ship on Wednesday to assess its safety and seaworthiness. The Norwegian Dawn remains at port in Bermuda. A spokesperson for the ship told CNN that passengers could stay on the ship or spend time in Bermuda. The ship temporarily lost power on Tuesday when it was leaving Bermuda’s King’s Wharf. Related: Confessions of a Cruise Ship Doctor Are you paying too much for Internet? Speaking to the Associated Press, passenger Rachel Hansen said the ship was about three miles from Bermuda when it ran aground. “We definitely felt it,” she said.

Sasha Fierce! Sasha Pivovarova’s 23 Best Runway Moments (Versace Spring 2010, Photo: Maria Valentino) Sasha Pivovarova’s beauty is a given, but it’s her intensity on the runway that made her a star. Since debuting on Prada’s Fall catwalk back in 2005, Pivovarova has made a name for herself by playing up the spooky side of her alien looks and putting those wide eyes and sunken cheekbones to good use in theatrical shows for the biggest names in fashion. Though she’s malleable enough to take on any character a designer can dream up, Pivovarova is at her best when she’s playing peculiar for iconoclasts like John Galliano or Alexander McQueen. In recent years, she’s softened her severity, taking time off from the runway to become an artist, but there’s still something wonderful about seeing her vamp her way down the catwalk. Take a look back through Pivovarova’s best moments from the Style.com archives below. $569 & up -- London Weeklong Summer Trip w/Air Prada Fall 2005 (Photo: Marcio Madeira) See more: The Best Red Carpet Arrivals at Cannes 2015

9 Style Rules Every Working Woman Should Follow By Kat Collings Every office is different, but we think these hard-and-fast fashion rules are applicable to almost any workplace setting. Go ahead and check out our handy wardrobe guide to ensure you’re not the reason HR is sending out that dress code refresher. Rule 1: Your neckline should never be lower than 4 inches below your collarbone. Rule 2: Sleeveless tops should extend to the edges of your shoulders. Rule 3: When in doubt, wear pumps. Related: 5 Things You Can Do Now to Start Dressing Better at Work Rule 4: Jeans necessitate more formal pairings, like a blazer and smart oxfords. Rule 5: Make sure all items are pressed and as wrinkle-free as possible. Rule 6: Don’t go overboard with print mixing. Rule 7: If you wear a slightly sheer top, make sure to top it with a blazer. Samsung Galaxy S6 available now at TELUS. Related: What Your Interview Outfit REALLY Says About You Rule 8: The safest hemline is at the knee. More From Who What Wear: 6 Tricks For Doing Pretty Much Anything In Heels

After Another Child Drowns, Critics Ask: Why Don’t More Cruise Lines Have Lifeguards? A cruise ship pool can be a dangerous place. (Photo: Thinkstock) A tragedy at sea is bringing renewed attention to a controversial cruise ship safety issue. On Sunday, a 10-year-old girl drowned on the pool deck aboard Norwegian Cruise Line’s Norwegian Gem. The ship had left New York on Saturday for a seven-day cruise to Florida and the Bahamas. The accident reportedly happened while the Norwegian Gem was some 75 miles off the coast of Myrtle Beach, South Carolina. A 10-year-old girl drowned aboard one of the pools on the Norwegian Gem. “On Sunday afternoon, the ship’s medical team responded to an emergency call from the pool deck, as a ten-year-old female guest was reported unresponsive,“ Norwegian said in a statement. Intimate Ships. cruisedealership Sponsored Sadly, children have been involved in a number of recent poolside tragedies aboard cruise ships. WATCH: 2013 Boy, 6, Drowns in Carnival Cruise Ship Pool Please sign in to use this feature. Yahoo Fireball Video Player YVAP Acct. Profile

How to Wear Head-to-Toe White Like Beyonce, Kim & Gigi So many things can go wrong when you wear all white: red wine, coffee, the general dirtiness of life. (If you haven’t already read about how everything is coated in poop, now might not be the best time.) But who cares when it looks this good? Slouchy, fitted, casual, fancy—women like Beyonce, Lily Aldridge, and of course Kim Kardashian prove that a little white dress isn’t the only way to wear spring’s hottest color. Though it might be the easiest, you’ll look infinitely more interesting after layering shades of bright white with nudes, ivory, and pale pink in a variety of textures. You probably have a favorite pair of white jeans, and there’s no shortage of white dresses out there. 10% on auto insurance Desjardins Insurance Sponsored As for how exactly to style the look, here’s all the inspiration you need. Related: Solange Breaks All the Fashion Rules at Her Wedding5 Rules to Score a Date with a Victoria's Secret Angel