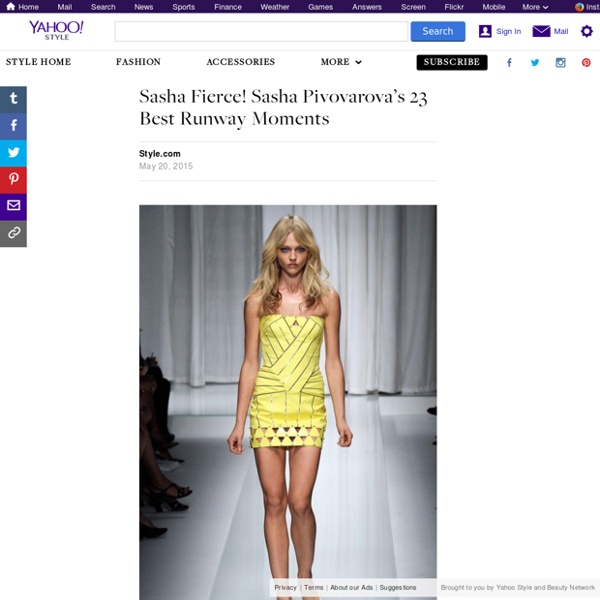 (Versace Spring 2010, Photo: Maria Valentino) Sasha Pivovarova’s beauty is a given, but it’s her intensity on the runway that made her a star. Since debuting on Prada’s Fall catwalk back in 2005, Pivovarova has made a name for herself by playing up the spooky side of her alien looks and putting those wide eyes and sunken cheekbones to good use in theatrical shows for the biggest names in fashion. Though she’s malleable enough to take on any character a designer can dream up, Pivovarova is at her best when she’s playing peculiar for iconoclasts like John Galliano or Alexander McQueen. In recent years, she’s softened her severity, taking time off from the runway to become an artist, but there’s still something wonderful about seeing her vamp her way down the catwalk. Take a look back through Pivovarova’s best moments from the Style.com archives below. $569 & up -- London Weeklong Summer Trip w/Air Prada Fall 2005 (Photo: Marcio Madeira) See more: The Best Red Carpet Arrivals at Cannes 2015

Here's Why Girl Meets World's Rowan Blanchard Was Never Your Traditional Disney Star Frazer Harrison/Getty Images If there's one Disney Channel star ready to take on the world, it may just be Rowan Blanchard. For three seasons, the actress was the heart and soul of Girl Meets World thanks to her friendship with Maya Hart (Sabrina Carpenter) and family bond with Cory and Topanga Mathews (Ben Savage and Danielle Fishel). But after E! News confirmed the show's cancellation Wednesday evening, many were left with a wide range of emotions.

9 Style Rules Every Working Woman Should Follow By Kat Collings Every office is different, but we think these hard-and-fast fashion rules are applicable to almost any workplace setting. Go ahead and check out our handy wardrobe guide to ensure you’re not the reason HR is sending out that dress code refresher. Rule 1: Your neckline should never be lower than 4 inches below your collarbone. Rule 2: Sleeveless tops should extend to the edges of your shoulders. No spaghetti straps allowed! How to Wear Head-to-Toe White Like Beyonce, Kim & Gigi So many things can go wrong when you wear all white: red wine, coffee, the general dirtiness of life. (If you haven’t already read about how everything is coated in poop, now might not be the best time.) But who cares when it looks this good? Slouchy, fitted, casual, fancy—women like Beyonce, Lily Aldridge, and of course Kim Kardashian prove that a little white dress isn’t the only way to wear spring’s hottest color. Though it might be the easiest, you’ll look infinitely more interesting after layering shades of bright white with nudes, ivory, and pale pink in a variety of textures.

Why New Mom Janet Jackson Needs Her Privacy More Than Most Janet Jackson was born to be famous. She might not have known it for a few years, but when she entered this world in 1966, she was joining a legendary musical dynasty in progress. The Jackson 5—featuring brothers Jackie, Tito, Jermaine, Marlon and then 6-year-old Michael Jackson, had already formed as The Jackson Brothers in 1964, and buoyed by their success, at 10 years of age Janet was entertaining America with her siblings on their TV variety show The Jacksons. Celebs Are Being Paid Lots of Money to Wear Jewels That Are Worth Lots of Money It’s no secret that the Cannes Film Festival (where glitz rules and high heels are reportedly mandatory on the red carpet), is a major marketing opportunity for luxury brands. In fact, jeweler Chopard thought the film festival was so key to its strategy, it apparently wrote checks totaling over $1 million to ensure that 11 stars, like Julianne Moore and Lupita Nyong’o, would wear the company’s baubles during the festivities. Yes, if you’re an A-List, of-the-moment actress or model, a company will loan you diamonds or emeralds worth hundreds of thousands of dollars and pay you six figures for the pleasure of “collaborating” on the event. So common is the practice of paying stars to don jewels during awards season, “7/10 of the nominees and presenters are paid for at least one or more of the items they are wearing [on the] red carpet,” says Matthew Berritt, Director at EVINS Communications, a leading luxury PR firm, based in New York. Find a Card In 30 Seconds!

Naomi Watts Really Loves This Snake Necklace One of the many perks of being a Bulgari spokesperson, is getting to wear some of the most amazing and expensive jewelry out there — and Naomi Watts certainly takes advantage of it. And while she most likely has her pick of the precious pot, the 46-year-old’s favorite seems to be the serpent necklace that she’s been spotted wearing time and time again. But while in the past, she’s opted for the diamond-encrusted serpent, at an event for Bulgari at tis year’s Cannes Film Festival, she instead opted for a gold version. She paired the statement piece with a simple black dress and pulled back hair, letting it do the talking. She’s followed this same style rule in the past, especially when wearing the more blinged-out interpretations, At the Golden Globes in January, the 46-year-old actress wore a canary yellow column dress from Gucci.

Target Coupons Online For 20% Entire Order Top Stores 1-800-PetMeds 4inkjets Amazon Auto Parts Warehouse CheapOair Pacsun PetSmart Puritans Pride Target Wal-Mart.com Target printable coupons: These coupons are used at target in-stores and get extra savings around 10% to 30% and even you can get some of the products free of cost. But you need to take a print out and you can find them here.target printable coupons are really usefull who are purchasing target in-stores. Target coupon codes: Here you can find target coupon codes on individual products and its dollar off so these coupon codes saves you dollars but some times here you can find 10% to 20% extra saving on entire target site or group of products or a category or a brand. Use target coupon codes at checkout to get reflect right discount. Target coupons: Here you can see target every day savings coupons without a code but use the coupon link to go the specified target discount offer page.

The Best Summer Dresses For Every Budget By Ana Colon & Rachel Besser Summertime, and the living’s easy — and, preferably pants-less. We got the culottes out of our system during the spring. Now, we’re ready to ditch the leg constraints altogether before the solstice. Related: J.Crew’s New Designer Collabs Are Here, & They’re SO Pretty Dear Silicon Valley Fashion Week, Where’s the New? Photo: Eli Zaturankski When you throw an event called Silicon Valley Fashion Week?, even with the question mark at the end, there are going to be expectations.

Lauren Conrad Debuts the ''Cutest Baby Bump Ever'' Lauren Conrad is bumpin'! The fashion mogul's team took to her LaurenConrad.com blog to reveal her growing baby bump for the very first time. "Oh hello, cutest baby bump ever," they wrote beside a photo of the soon-to-be mama standing on a balcony in a striped dress that hugged her tiny bump with a beige sweater over.