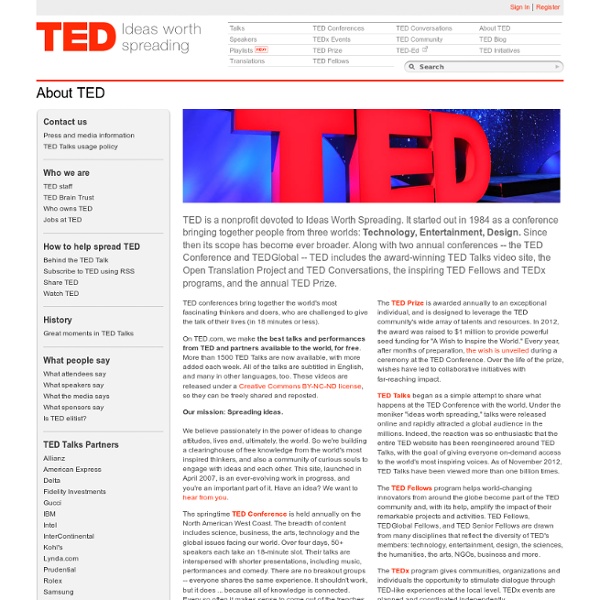 TED is a global community, welcoming people from every discipline and culture who seek a deeper understanding of the world. We believe passionately in the power of ideas to change attitudes, lives and, ultimately, the world. On TED.com, we're building a clearinghouse of free knowledge from the world's most inspired thinkers — and a community of curious souls to engage with ideas and each other, both online and at TED and TEDx events around the world, all year long. In fact, everything we do — from our TED Talks videos to the projects sparked by the TED Prize, from the global TEDx community to the TED-Ed lesson series — is driven by this goal: How can we best spread great ideas? TED is owned by a nonprofit, nonpartisan foundation. Our agenda is to make great ideas accessible and spark conversation. We want to hear from you: Contact us

Does Loneliness Reduce the Benefits of Exercise? Luke White With Valentine’s Day around the corner, this seems the proper moment to ask whether being in a relationship changes how you exercise and, perhaps even more intriguing, whether relationships affect how exercise changes you. That latter possibility was memorably raised in an elegant series of experiments conducted not long ago at Princeton University. The researchers were trying to replicate earlier work in which the brains of mice given free access to running wheels subsequently fizzed with new brain cells, a process known as neurogenesis, and the mice performed better on rodent intelligence tests than those without access to wheels. To the Princeton researchers’ surprise, when they performed the same study with rats, “which are a little closer, physiologically, to humans,” said Alexis Stranahan, the lead author of the Princeton study, running did not lead to neurogenesis. Why and how isolation affects exercise and neurogenesis remain somewhat mysterious, said Dr.

Registering a Private Company | SME Toolkit South Africa Provided by Business Partners Ltd, South Africa's leading investor in SMEs When you're setting up your business, one of the first decisions you'll have to make is what kind of legal entity to register. Each business entity has its own pros and cons, so don't make the decision in a hurry or without having all your facts. If yours is a medium-sized enterprise, you may think about registering a Private Company. If your business venture has a number of shareholders/owners, with a potentially high annual turnover, a Private Company (Pty, Ltd) may be your best option. It must be legally registered, with a minimum of one shareholder (maximum 50) and have a Managing Director. One of the most attractive features of a Private Company, is that the law sees it as it's own legal entity, so shareholders can not be held personally liable for any debt the company might incur during the course of doing business, or should the business fail.

Wii Shall Overcome Illustration: Marcos ChinIn February 2010, Jane McGonigal completed another level in her quest to become America's new guru of gaming. She delivered a talk at TED, the annual California conference that's an obligatory stop for anyone peddling a Big Idea, from Al Gore to Bill Gates to David Byrne. McGonigal's was that video games can fix the planet's toughest problems. It's a bold, appealing proposition: Game-addled kids, who spend an average of more than 10,000 hours fiddling with consoles and controllers before they turn 21, could wind up stopping climate change with their PlayStations! It should come as no surprise that gamers, techies, and Silicon Valley types have been thrilled to have a much-maligned pastime elevated to an altruistic pursuit—and by an exuberant, un-geeky blonde, no less. McGonigal's new book, Reality Is Broken: Why Games Make Us Better and How They Can Change the World, is sure to amplify the buzz.

Full-Service Gyms Feel a Bit Flabby - Skin Deep Brandon Thibodeaux for The New York Times Matthew Knowles on a treadmill in Dallas. Solo exercisers pose a challenge to many gyms. It used to feel worthwhile to commit to an annual membership at an everything-and-the-kitchen sink gym featuring high-spirited classes, top-of-the-line cardio machines, weights — and perhaps a shot at striking up a conversation with Ms. But these days, the idea of a full-service gym is as stale as yesterday’s sweat-soaked towel. For all their ads promising to stir motivation, gyms have failed to do so. Blame the gym’s now-ubiquitous flat-screen TVs and the fact that iPods are de rigueur, said Jonathan Fields, a marketing consultant in Manhattan who has helped found personal-training gyms and studios. Kitchen-sink gyms also face pressure from operations like Planet Fitness, a chain founded in 1992 that offers Cybex treadmills and weight machines, but which does not have Zumba classes or perks like towels — and charges $10 a month. Mr.

Companies and Intellectual Property Commission Wine critic Mike Steinberger tries a '47 Petrus in awkward company. - By Mike Steinberger I published a lengthy investigative piece last June about the fraud scandal roiling the fine-wine world. At the center of the story was a New York-based retailer called Royal Wine Merchants, which appeared to have served as a conduit for Hardy Rodenstock, a German pop-music-promoter-turned-wine dealer who is suspected of flooding the market with counterfeit old Bordeaux. Focusing on one wine in particular, the 1921 Château Pétrus, the piece documented the links between Rodenstock and Royal and also showed how the allegations against Royal dragged the critic Robert Parker into the controversy. (For an update on the major players mentioned in the June article, click .) After the article ran, I exchanged e-mails with a friend of mine named Wilfred Jaeger, a Bay Area wine collector (he co-owns a restaurant in San Francisco called RN74, one of the city's premier wine hangouts, and also owns parts of two vineyards in Burgundy). I was wrestling, too, with my own conflicted feelings.

The Best Films of 2010 - Movies - News Our picks for the top ten releases of the year. If 2010 has been the year of the fuzzy line between fact and fiction, it’s also been the year in which the truth became subjective and, often, incidental. These past 12 months saw the arrival of the avowed documentary many suspect is staged “Catfish,” and the admitted staged film that pretended to be a documentary “I’m Still Here,” but as the dust has cleared, what remains is the question of their bona fides as stand alone films. Does Banksy’s puckish “Exit Through the Gift Shop” lose some of the bite of its bitterly funny art world commentary if it turns out to be more engineered than it claims? Your answers may differ, but personally, I’m not that concerned. 10. 9. 45365Directed by Bill Ross IV and Turner Ross This documentary about Sidney, OH — population 20,211 — is a heady dose of concentrated Americana that could make even the most avowed urbanites yearn for the small-town childhood they never had. 8. Oh, that title. 7. 6. 5. 4. 3.

Blue Valentine, with Michelle Williams and Ryan Gosling, reviewed. - By Dana Stevens Within the first 15 minutes of Derek Cianfrance's wrenching romantic drama Blue Valentine (the Weinstein Co.), you know more about the intimate, day-to-day details of its characters' lives than you do by the end of most movies. Cindy and Dean (Michelle Williams and Ryan Gosling) are a married couple in their late 20s or early 30s. They live in rural Pennsylvania with a daughter of about 5 (Faith Wladyka). Cindy, an obstetrics nurse, loves her job and is good at it, but at home she's snappish, discontented, and perpetually overworked. Dana Stevens is Slate's movie critic. Follow At the end of one particularly miserable day, Dean decides that what he and his wife need is a night in what Cindy ungraciously but accurately describes as a "cheesy sex motel." Blue Valentine's ingenious temporal structure is one of the best things about it. Blue Valentine isn't perfect: There are a few narrative details that feel contrived, a little pat.