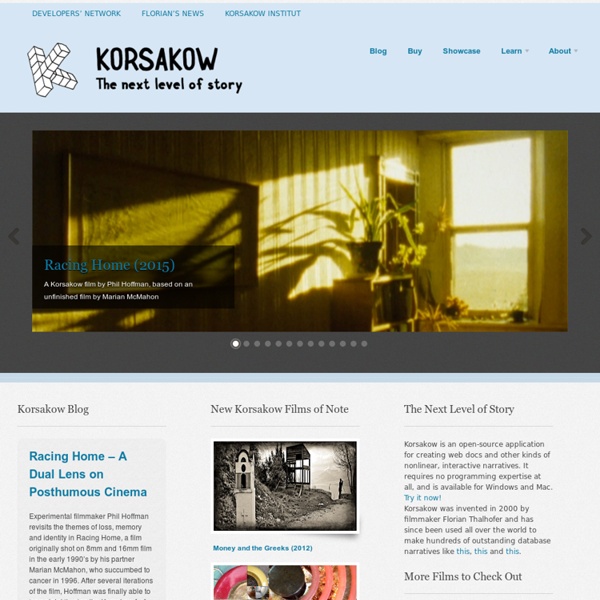 Rafael Lozano-Hemmer - Project "Voz Alta" Relational Architecture 15 "Voz Alta" (Loud Voice) is a memorial commissioned for the 40th anniversary of the student massacre in Tlatelolco, which took place on October 2nd 1968. In the piece, participants speak freely into a megaphone placed on the "Plaza de las Tres Culturas", right where the massacre took place. As the megaphone amplifies the voice, a 10kW searchlight automatically "beams" the voice as a sequence of flashes: if the voice is silent the light is off and as it gets louder so does the light's brightness.

interactive - National Film Board of Canada At the NFB we like change. For 70 years we've experimented, innovated, and produced a legacy of technical and creative firsts in cinema, animation, and documentary. Think McLaren, Lipsett, Brittain, and Jutra; Stereoscopic 3d, VTR, and participatory media. Today, the way we create, consume, and connect with each other changes by the minute. And this evolving collection of stories reflects that reality. It's the result of artists and storytellers of all sorts utilizing new technology, to explore new forms of creation, for a new kind of Canada.

Money and the Greeks (2012) What is life like in Greece? How do people deal with the crisis, you hear so much about, when you turn on the news? This project started in late 2011 when Florian Thalhofer and his partner (now wife) Elissavet Aggou traveled through Greece to talk with people about how they were dealing with their economic situation. User-generated site adds historical layer to Google Maps - Springwise Gain instant and exclusive access to over 5,000 of the most creative ideas, innovations and startups on our database and use our smart filters to take you direct to those that are most relevant to your industry and your needs. Not interested? You can still browse articles published in the last 30 days from our homepage and receive your daily and weekly fix of entrepreneurial ideas through our free newsletters.

Collapsus - Energy Risk Conspiracy Collapsus is an immersive web experience set in a near-future world after peak oil, where conspiracy and treason are rife. Against a dramatic backdrop of global energy politics, Collapsus combines interactivity with animation, fiction and documentary, inviting the user to embark on a quest to collect information, find solutions, and make crucial decisions that will leave their mark on a national and a global scale.www.collapsus.com See also our interview with the creators and producers of Collapsus and our walkthrough of Collapsus with audio commentary by director Tommy Pallotta. Awards Collapsus received an Emmy nomination for Best Digital Fiction, a People’s Choice Award and Interactive Award nominations at SXSW 2011, the Dutch Spin Award, and a World Summit Award. Collapsus.com is a Submarine Channel production in co-production with VPRO Backlight.

Filmmakers Collaborative FC offers low cost fiscal sponsorship to independent producers across the country. Many foundations will not issue grants to individuals but only to non-profits, so instead of starting their own 501(c)3 organization, filmmakers often align themselves with an established non-profit, allowing them to apply for a wide range of grants and offer their donors a tax deduction. FC is not simply a “pass through;” it is a member organization that accepts and administers contributions made to our members’ projects, monitors reports to ensure that grant funds are spent in accordance with funder requirements, and acts as the liaison between foundations and filmmakers. Since 1986 FC has managed more than $25 million in grants and donations for over 200 projects. Our films have been shown nationally and internationally, and have won awards at festivals and competitions around the world. Besides films and videos, we sponsor websites, apps, games, and digital projects on a range of platforms.

Projects Skip to content Exploring documentary storytelling in the age of the interface Active Filter : None loading... Hugo, Remediation, and the Cinema of Attractions, or, The Adaptation of Hugo Cabret It’s obvious that Martin Scorsese’s movie Hugo (2011) showcases its director’s great love of cinema and cinema history. Less obvious, perhaps, is the film’s love of books. Hugo adapts Brian Selznick’s bestselling children’s novel, The Invention of Hugo Cabret, which won the 2008 Caldecott Medal for best children’s illustrations. The relationship between film and novel poses an especially interesting case for students of adaptation; the book is itself fascinated by early cinema and the unusual number of its illustrations – and the extent to which illustrations help tell the story, in collaboration with the text – help make the novel seem almost cinematic, an impression reinforced by the number of stills used in the book to help bring the reader into the characters’ experiences of movie watching.