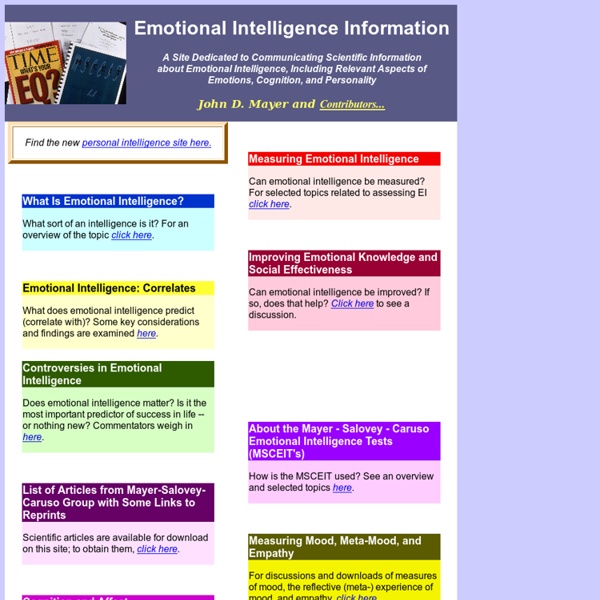 ReTravailler Creating a Safe Place: Lessons on Managing Emotions Pay Off Integrating social and emotional learning across the curriculum helps make a secure learning environment. The social ills found in public schools -- bullying, school shootings, gang violence -- litter the media. Here's one headline, however, that didn't get much play: "Student Encourages Peer to Hand Over Unloaded Gun in School." In October 2007, a seventh-grade student at Goldenview Middle School, in Anchorage, Alaska, was showing off the .38-caliber weapon he'd brought to school to show to a fellow student and friend. This alternative headline -- or nonheadline -- was the result of social and emotional education (SEL) initiatives put in place in the Anchorage School District. Over the past decade, SEL has taken an increasingly important place in K-12 education. What Is Social and Emotional Learning? The term "emotional intelligence" was popularized by the success of psychologist Daniel Goleman's 1995 best-selling book of the same name. Credit: Indigo Flores Anger-Management Strategies

Emotional-Intelligence Research: Indicators Point to the Importance of SEL Research finds that students who receive lessons in appropriate social and emotional behavior do better in school and life. Following is a summary of research on the effectiveness and workplace benefits of social and emotional learning programs in schools. Academic achievement and student behavior improve in schools with good social and emotional learning programs. Research backs up assertions that role-playing lessons in self-awareness and empathy, like this one at Patrick Daly Elementary School in Brooklyn, lead to personal and academic success. Credit: Edutopia Child Development Program Resolving Conflict Creatively Program A two-year study of 5,000 second- through sixth-grade children in fifteen New York City schools by the National Center for Children in Poverty at Columbia University found a positive impact on children who received regular instruction in the Resolving Conflict Creatively Program (RCCP) curriculum from motivated teachers. Responsive Classroom Seattle Development Project

Consortium for Research on Emotional Intelligence in Organizations HumanMetrics - online relationships, personality and entrepreneur tests, personal solution center Tony Bencivenga: In Support of Social/Emotional Learning Curriculum Tony Bencivenga, principal of Benjamin Franklin Middle School in New Jersey, talks about how his school has benefited from supporting emotional learning in the curriculum and focusing on teacher preparation. 1. How valuable is social/emotional learning for students? I believe that the social/emotional component is clearly the most important part of a child's life. We need to interact with each other. We need to care for each other. I'm committed to making sure that children have a good picture of their own self-worth, they feel good about who they are, and are committed to making others feel good. Back to top 2. We have a strong academic program at BF and that program is based on important principles, like constructivism, creating meaning, metacognition, authentic assessment, all those good things that are all part of what one would want to see in a solid, comprehensive academic program. 3. 4. 5. 6. 7. In my view, and here at BF, we make that commitment. 8.

List of Emotions 7 Simple Tips To Deal With Negative People | zen habits “The people who are the hardest to love are the ones who need it the most.” ~Peaceful Warrior Editor’s Note: This is a guest post from Celestine Chua of The Personal Excellence Blog. Have you ever dealt with negative people before? If you have, you will know that the experience can be quite a downer. I used to have an ex-colleague who was very negative. The first time we had a meeting, I felt very drained. The same thing happened the next few times we talked. After a while, I figured I needed to work out an action plan to deal with negative people. With this in mind, I then brainstormed on the best approach to handle negative people. If there’s someone negative in your life at the moment, don’t let yourself be affected by him/her. Here, I’d like to share my 7 tips on how you can deal with negative people: Tip #1: Don’t Engage in the Negativity One thing I found is negative people tend to harp on the bad things and ignore the positive stuff. For starters, try to switch topics.

Emotional Intelligence Is the Missing Piece Social and emotional learning can help students successfully resolve conflict, communicate clearly, solve problems, and much more. Emotional Intelligence: An Overview Credit: Edutopia Whether it's in the boardroom or the classroom, individuals need the skills to communicate, work in teams, and let go of the personal and family issues that get in the way of working and learning. Emotionally intelligent individuals stand out. Psychologist and author Daniel Goleman popularized the term "emotional intelligence" in his landmark 1995 best-selling book of the same name. Students in Sarah Button’s fifth-grade class at P.S. 15 in Brooklyn learn how to defuse potentially volatile incidents. Self-Awareness and Empathy Jonathan Cohen, president of the Center for Social and Emotional Education in New York, argues that attributes like self-awareness and empathy play a huge role in every aspect of life. Miraculous Transformations Skills More Than Values