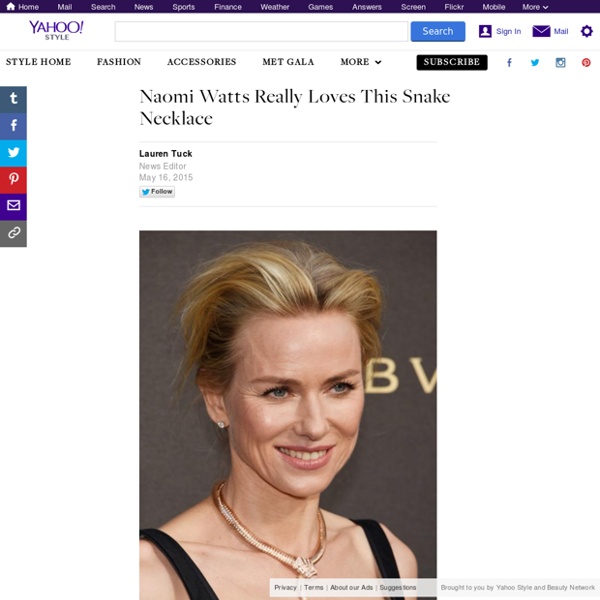 One of the many perks of being a Bulgari spokesperson, is getting to wear some of the most amazing and expensive jewelry out there — and Naomi Watts certainly takes advantage of it. And while she most likely has her pick of the precious pot, the 46-year-old’s favorite seems to be the serpent necklace that she’s been spotted wearing time and time again. But while in the past, she’s opted for the diamond-encrusted serpent, at an event for Bulgari at tis year’s Cannes Film Festival, she instead opted for a gold version. She paired the statement piece with a simple black dress and pulled back hair, letting it do the talking. She’s followed this same style rule in the past, especially when wearing the more blinged-out interpretations, At the Golden Globes in January, the 46-year-old actress wore a canary yellow column dress from Gucci. Business-sized purchasing power American Express Sponsored Also from the Bulgari Serpenti collection, Watts tried out the emerald one (what a way to live!) Related:  dellaabf • demicbg

Dear Silicon Valley Fashion Week, Where’s the New? Photo: Eli Zaturankski When you throw an event called Silicon Valley Fashion Week?, even with the question mark at the end, there are going to be expectations. We’re going to want to see Silicon Valley’s definition of fashion. We’re going to want to see how the tech industry will reimagine the things we put on our bodies. We’re going to want to see how we’ll all dress in the future. I approached the first two nights of the three night event feeling both snotty and skeptical—I spent a decade covering the fashion industry’s traditional fashion weeks, so go ahead, show me fashion—but also hopeful. Save up to $335 on your auto insurance Desjardins Insurance Sponsored The second night was more fashion-y, you could say, in that the focus was more on clothes. Overall the event seemed designed to provoke outsiders and entertain insiders. Join the Air Travel Advisory Panel Air Travel Advisory Sponsored Related: Karlie Kloss Talks Taylor Swift, Cookies & Harvard

9 Style Rules Every Working Woman Should Follow By Kat Collings Every office is different, but we think these hard-and-fast fashion rules are applicable to almost any workplace setting. Go ahead and check out our handy wardrobe guide to ensure you’re not the reason HR is sending out that dress code refresher. Rule 1: Your neckline should never be lower than 4 inches below your collarbone. Rule 2: Sleeveless tops should extend to the edges of your shoulders. Rule 3: When in doubt, wear pumps. Related: 5 Things You Can Do Now to Start Dressing Better at Work Rule 4: Jeans necessitate more formal pairings, like a blazer and smart oxfords. Rule 5: Make sure all items are pressed and as wrinkle-free as possible. Rule 6: Don’t go overboard with print mixing. Rule 7: If you wear a slightly sheer top, make sure to top it with a blazer. Samsung Galaxy S6 available now at TELUS. Related: What Your Interview Outfit REALLY Says About You Rule 8: The safest hemline is at the knee. More From Who What Wear: 6 Tricks For Doing Pretty Much Anything In Heels

Bell-Sleeved Blouses For Every Budget Looking for a fresh way to sass up your jeans? Then clear out a special spot in your closet for the latest take on statement dressing: The bell-sleeved blouse. We can’t get enough of this fun and flirty top, as it’s the perfect pairing for just about any spring skirt, short or pant you can think of. Whether you’re buying on a budget or have some extra spending money in your pocket, you can score your own version of the up-and-coming trend today. With 5 great options at your fingertips, why wouldn’t you want to jump on the bandwagon immediately? Photo: Vanessa Jackman Lolita Circle Sleeve V-Neck Shirt, Ellery $750 Related: The Best Shoes To Wear With Awkward-Length Pants Floral Bardot Top, Topshop $58 Bell Sleeve Lace Top, Kalmanovich $960

Solar Panel Bags, Jackets That Hold Laptops, Drone Mannequins, & More from Silicon Valley Fashion Week Photography by Eli Zaturankski As someone who returned to San Francisco after years of covering fashion weeks around the world for Vogue, I was intrigued when my editor came calling with the request to report on Silicon Valley Fashion Week. First of all, it’s not really a week at all (more like three days), but what could we possibly expect to see? “[Burning Man] was the entry and inspiration for me to get into fashion. $265 & up -- All-Incl. “It was one of those, ‘Why the hell not things’,” Lindland said. Held at The Chapel, a music venue in San Francisco’s Mission neighborhood, the event drew sponsors including custom manufacturer PCH and retail app Shimmer and has been sold out for weeks. Tuesday’s night’s theme was “electric motion.” Mortgage Rates Have Dropped in Canada RateSupermarket.ca Sponsored His friend, Chris, chimed in, “Fashion can be anything.” More from Yahoo Style:Wearable Tech Now Rules the Runway Wearable Tech Review: The Mighty Purse

Jennifer Lawrence is the New Face of Dior Beauty Photo Courtesy of Dior Jennifer Lawrence is already one of Dior’s best brand ambassadors. She’s been serving in the role since 2012 and her responsibilities have included appearing in their handbag campaign and strictly wearing the iconic French label on the red carpet. In the first official photos from the campaign, Lawrence’s hair is pulled back — which showcases her porcelain skin, and bold brows — and she has on subtle brown eye shadow, and a light pink lips (one of the 44 new shades in Dior’s new lipstick collection, which is set to relaunch on September 1). Save on your Car Insurance Dior’s goal with tapping the 24-year-old is similar to its competitors’ who’ve named young millenials with massive social media followings such as Gigi Hadid and Kendall Jenner to represent them. It’s official: Lawrence is a woman of all trades…and shades.

How to Wear Head-to-Toe White Like Beyonce, Kim & Gigi So many things can go wrong when you wear all white: red wine, coffee, the general dirtiness of life. (If you haven’t already read about how everything is coated in poop, now might not be the best time.) But who cares when it looks this good? Slouchy, fitted, casual, fancy—women like Beyonce, Lily Aldridge, and of course Kim Kardashian prove that a little white dress isn’t the only way to wear spring’s hottest color. You probably have a favorite pair of white jeans, and there’s no shortage of white dresses out there. 10% on auto insurance Desjardins Insurance Sponsored As for how exactly to style the look, here’s all the inspiration you need. Related: Solange Breaks All the Fashion Rules at Her Wedding5 Rules to Score a Date with a Victoria's Secret Angel

Fabric is Overrated at the 2015 Billboard Music Awards Whole dresses are so last year. These days, the cool kids are cutting chunks of fabric out of their outfits. Showing off your tight curves through a sheer layer of embellished mesh is pretty much reserved for Kim, Beyonce, and J.Lo. Mariah Carey experimented with above knee cut-outs at the 2015 Billboard Music Awards, while E!' Lupita Nyong’o Loves a Flowy Dress Moment Lupita Nyong’o has only been a staple on step-and-repeats for a couple of short years, but the actress brings endless charm to what could be a dull and repetitive gig. Her fashions are always interesting, from her red Ralph Lauren cape moment to that pirate-inspired Prada ensemble she wore to the 2014 Met Ball. But it’s her seemingly favorite silhouette, a deep V-neck dress with full pleated skirt, that’s pure magic. Every time she’s worn this similarly cut kind of dress, she’s twirled and whirled the flimsy fabric to the delight of photographers and the Internet’s enthusiastic meme makers alike. For her Oscars debut, the Best Supporting Actress winner wore a custom light blue silk Prada gown that reminded her of Nairobi. With a diamond Fred Leighton headband, the look — and her theatrics — gave off major Cinderella vibes. 10% on auto insurance Desjardins Insurance Sponsored A year later, she wore a striped Elie Saab dress to the Screen Actor’s Guild Awards.

Target coupons Coupons, Other top stores 1-800-PetMeds Coupons 4inkjets Coupons Amazon Coupons Auto Parts Warehouse Coupons CheapOair Coupons Pacsun Coupons PetSmart Coupons Puritans Pride Coupons Target Coupons Wal-Mart.com Coupons Target printable coupons: These coupons are used at target in-stores and get extra savings around 10% to 30% and even you can get some of the products free of cost. But you need to take a print out and you can find them here.target printable coupons are really usefull who are purchasing target in-stores. Target coupon codes: Here you can find target coupon codes on individual products and its dollar off so these coupon codes saves you dollars but some times here you can find 10% to 20% extra saving on entire target site or group of products or a category or a brand. Use target coupon codes at checkout to get reflect right discount. Target coupons 20% off Promo codes online discounts 2014: What else can make you feel better than a great discount?

Kerry Washington, Kristen Stewart & Lady Gaga Are All Fans of This New—Affordable–Red Carpet Brand Maisie Wiliams (Arya Stark on Game of Thrones) was the first to wear Self-Portrait on a major red carpet. I noticed because she looked fresh, I'd never seen the dress before, and it took me longer than usual to track down the designer. That was in January, at the SAG Awards. Since then, Reese Witherspoon and Lucy Hale have worn the lacy looks. "I didn't set out to purposely fill a void in the market place," Han Chong, the creative director, tells Yahoo Style. $569 & up -- London Weeklong Summer Trip w/Air The Central St. From ASOS to Net-a-porter, it doesn't look like anyone can keep Self-Portrait in stock—and that's just the way Chong wants it: "Beauty shouldn't be just for the privileged few." Related: Riley Keough Talks “Mad Max,” Her Wedding & Twinning With Kristen Stewart Kerry Washington on Books, Babies & Prada

The Best Summer Dresses For Every Budget By Ana Colon & Rachel Besser Summertime, and the living’s easy — and, preferably pants-less. We got the culottes out of our system during the spring. Now, we’re ready to ditch the leg constraints altogether before the solstice. Related: J.Crew’s New Designer Collabs Are Here, & They’re SO Pretty To make sure you’re ready for everything the next few months will throw at you, we rounded up the biggest dress trends you need to know about this summer. The Lace-Up DressAll strapped in and ready to go. Gucci Lace-Up Denim Mini Dress, $1995, available at NET-A-PORTER. Related: This Instagram Of Top Models Is So Bad, It’s Good Save on your Car Insurance Extra points if you pair this with classic lace-ups. Pixie Market Denim Lace Up Tunic, $62, available at Pixie Market. The Safari ShirtdressWhere in the world is Carmen Sandiego? Burberry London Longsleeve Safari Shirtdress, $1495, available at Shop Bazaar. Related: Chic Travel Outfits That Don’t Sacrifice Comfort BlackBerry® LeapTM available now at TELUS.

Jcpenney coupons A.N.A comfortable and cool How Dior’s Dior So Real Sunglasses Became a Street-Style Sensation (photo: Getty Images) As with any sweeping trend, this one started with Rihanna. During the Fall 2014 shows, the pop songstress’ first true show season tour de force, Rih arrived at the Dior presentation in Paris in a showstopping slipdress paired with thigh-high stockings, dripping diamond jewelry, and donning a red furry coat to match her crimson lipstick. It was a look that caused a minor Internet riot, though while many freaked over her sultry style, the element of her outfit that really took off was the Dior So Real mirrored sunglasses perched on her visage. The reflective and bridgeless specs became an overnight sensation. Editors bought them, bloggers styled them, and Rihanna fans at home coveted them. Easy Crab Appetizers with Breton Bean #BretonBean See Rihanna’s and more of the Dior So Real’s street-style hits on Style.com. (photo: BFA.com) (photo: Getty)