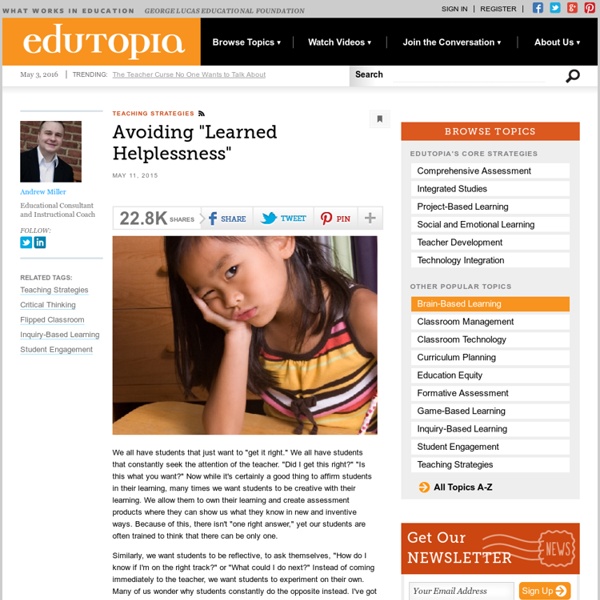 We all have students that just want to "get it right." We all have students that constantly seek the attention of the teacher. "Did I get this right?" "Is this what you want?" Now while it's certainly a good thing to affirm students in their learning, many times we want students to be creative with their learning. We allow them to own their learning and create assessment products where they can show us what they know in new and inventive ways. Similarly, we want students to be reflective, to ask themselves, "How do I know if I'm on the right track?" Curate and Create Learning Resources If we want to have students seek out other information from sources other than the teacher, then we must make sure those resources are available. Questions "For" (Not "About") Learning What do I mean by this? What else could you try? Questions are powerful tools for helping students own the process of learning. Stop Giving Answers Allow for Failure

Eye-Opening Ads Show What It's Like For Kids With Learning And Attention Issues According to the National Center For Learning Disabilities, one in five kids have learning and attention issues. These two PSAs give parents a glimpse into what it's like inside the minds of their kids with learning and attention problems. The ads show parents asking their Siri-esque smartphone assistants questions about their children's problems with school and learning -- only to be constantly misunderstood and given answers to completely different questions. "Why is Connor having trouble focusing in school?" Another set of parents ask their smartphone about their daughter Sarah's problems with reading and receive a slew of answers, from "information on hot water heating" to "World music. That's when the ad reveals it's clever ploy: "I was trying to show how Sarah feels every day. The two PSAs are part of a campaign to promote Understood.org, a comprehensive web resource to help parents of kids with learning and attention issues help and empower their children. H/T Adweek

Challenges in Education: A Student's-Eye View | Edutopia As many teachers know, the national discussion on education is overcrowded with opinions on teacher training, salaries, tenure, and unions -- with occasional detours through iPads, textbooks, and national policy. In fact, it seems that we listen to every interested party except the one for whom education exists in the first place: students. We've worked one-on-one with hundreds of students over the last decade, and while they always start from "my teacher hates me" or "I'm just bad at this subject," a change in their own behaviors and beliefs consistently leads to a turnaround in grades. We've seen firsthand all the ways that students can impede their own academic performance. We've seen how parents and our culture at large unwittingly sabotage students' success. And then we've seen our society give teachers full responsibility for a process that is only partially in their hands. What the Students Are Thinking Here are some of the survey's most telling results. So What? 1. 2. 3.

How a Bigger Purpose Can Motivate Students to Learn A few years ago, psychologist David Yeager and his colleagues noticed something interesting while interviewing high school students in the San Francisco Bay Area about their hopes, dreams and life goals. It was no surprise that students often said that making money, attaining fame or pursuing a career that they enjoyed were important to them. But many of them also spoke of additionally wanting to make a positive impact on their community or society — such as by becoming a doctor to take care of people, or a pastor who “makes a difference.” What’s more, the teens with these “pro-social” types of goals tended to rate their schoolwork as more personally meaningful. Given this information, Yeager and his colleagues wanted to know: could such a bigger sense of purpose that looks beyond one’s own self-interests be a real and significant inspiration for learning? They believe the answer is yes. Can Drudgery Be Eliminated from Learning? It’s complicated, though. How Does It Work?

Why "Content Coverage" is Over: A Manifesto! | Edutopia OK, before you immediately react and make a comment, let's take a breath! Yes, we live in an education world that is driven by content. We have standards, learning objectives, and the like. We have curriculum, texts, and pacing guides. We have high-stakes standardized tests, benchmark exams, and AP or IB tests that drive our instruction. Regardless, all of these forces move us toward coverage. We Can't! "I can't cover all the content." When I hear these complaints from the teachers I work with about all the standards and content they must cover, I always talk about my pressures with AP exams. We Prioritize! The interesting thing here is that many of us unknowingly don't cover content. When I reflected on my poor performance as a teacher in an AP class, I realized that I needed to focus on the important and big ideas, maybe even the big "buckets" that I knew were important for students to know. We Are Great Teachers! From all this, it comes down to one major point: We are professionals.

Here's What Scientists Aren't Telling Us About Learning Exploring Self-Driven Learning and Student Motivation (Ferlazzo) I’ve admired the work of Larry Ferlazzo since early on in my blogging career. I first came across him back when his blog earned numerous Edublog nominations and awards starting back around 2009. In the years since, he had been a prolific author, with numerous books about student motivation, a topic dear to my heart and mind. Now I must admit with some embarrassment that it was only last week that I finally bought one of his many well-regarded books and started digging into it. Self-Driven Learning … starts by making the case against extrinsic rewards as motivation. Throughout the book, Ferlazzo also offers links to sets of resources for further exploration, like these: The Brain is like a muscle – developing a growth mind set. It’s always been a belief of mine that everyone learns much better when they are treated and spoken to respectfully (as opposed to being talked down to, which is something too many teachers are far too willing to do). About Kelly Walsh Print This Post

Lifelong learning should play a role in Global Citizenship Education - European Association for the Education of Adults ‘Global citizens’ are more involved in their communities and are aware of the global ties of their actions. Lifelong learning can play a crucial role in Global Citizenship Education to raise awareness of global inequalities, to foster democratic change and to empower citizens worldwide. “If you can read this, you are luckier than three billion people who cannot read or write. She spoke at the workshop 'Global Citizenship and education in a developing world' at the European Development Days in Brussels, on 3 June 2015. Taking a global perspective In regard to the prevailing global inequalities, the speakers of the workshop urged policy makers and civil society to strengthen education, especially adult education and lifelong learning, as a tool to overcome disparities and thereby contribute to global citizenship. "Today, people live in a rapidly changing globalised world that needs to be shaped actively," said Rilli Lappalainen. Becoming and being a 'global citizen' From local to global level

Adults, Computers and Problem Solving - What's the Problem? - en The report provides an in-depth analysis of the results from the Survey of Adult Skills related to problem solving in technology-rich environments, along with measures concerning the use of ICT and problem solving. The Nordic countries and the Netherlands have the largest proportions of adults (around 40%) who score at the higher levels in problem solving, while Ireland, Poland and the Slovak Republic have the smallest proportions of adults (around 20%) who score at those levels. Variations in countries’ proficiency in problem solving using ICT are found to reflect differences in access to the Internet and in the frequency with which adults use e-mail. The report finds that problem-solving proficiency is strongly associated with both age and general cognitive proficiency, even after taking other relevant factors into account. Proficiency in problem solving using ICT is related to greater participation in the labour force, lower unemployment, and higher wages.