THE ENCYCLOPEDIA OF SCIENCE 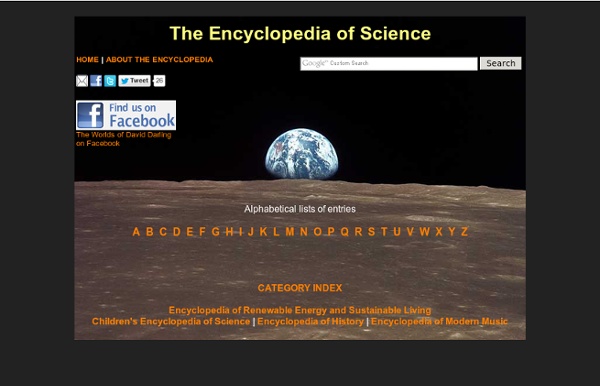 Tyranny Of Words - Stuart Chase Stuart Chase (1888-1985) Born in Somersworth, New Hampshire was an American economist and engineer trained at MIT. His writings covered topics as diverse as general semantics and physical economy. His hybrid background of engineering and economics places him in the same philosophical camp as R. Buckminster Fuller. The Featured Creature edX - Home Neuroscience For Kids The smell of a flower - The memory of a walk in the park - The pain of stepping on a nail. These experiences are made possible by the 3 pounds of tissue in our heads...the BRAIN!! Neuroscience for Kids has been created for all students and teachers who would like to learn about the nervous system. Discover the exciting world of the brain, spinal cord, neurons and the senses. Use the experiments, activities and games to help you learn about the nervous system. There are plenty of links to other web sites for you to explore. Can't find what you are looking for? Portions of Neuroscience for Kids are available in Spanish, Slovene, Chinese, Portuguese, Italian, Korean, Dutch, Telugu, Japanese, Belarusian, Serbian, Russian and Turkish. "Neuroscience for Kids" is maintained by Eric H.