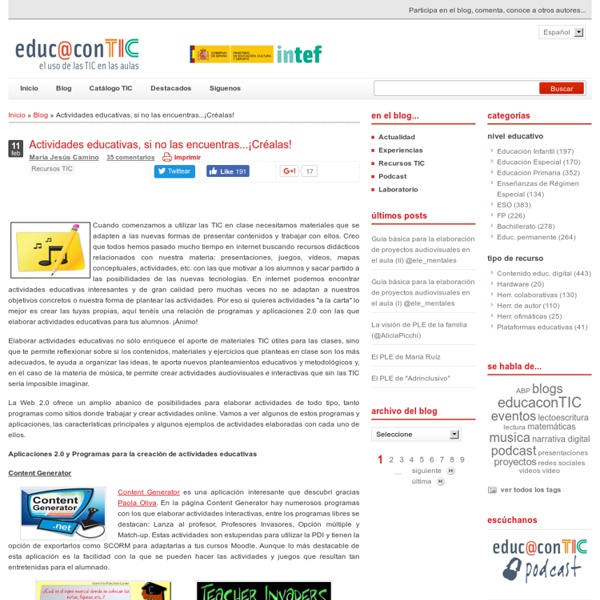 7 Great Tools for Creating Flipped Lessons from Existing Videos When they are used in the right context flipped lessons can be a good complement to classroom instruction. Not everyone has the time or skill to make effective instructional videos for their students. In those cases you can take advantage of the millions of hours of instructional videos found on YouTube and other video sharing sites. But don't just have your students watch the videos then come back to your classroom.

Digital Learning Day Do you want to use more digital learning to meet the needs of each of your students? Teachers, librarians, and instructional coaches from across the country have helped us to develop these toolkits that are ready for you to use today! These toolkits are not the totality of good information available; instead, they are designed to provide a few ideas about how technology can enhance the educational experience for students in the topic areas addressed. Digital Learning Day 2015 295 days 39 Sites For Using iPads in the Classroom Pages - Menu This Blog Linked From Here Sites to Follow Friday, October 7, 2011 Tagxedo - Creator: Nubes de palabras (Crea imágenes con palabras) Processing ... Personal $ Svg $20 ✓ Up to $75 merchandises for personal use.

How to Create a Google My Maps Challenge During a session at ISTE17, Steven Anderson and I created an interactive, group challenge to kick it off. We had educators assemble into teams, pick a team name, and gave them a link to a Google My Maps. The link took the teams to a location where they learned about a social media platform, had a task to complete, submitted their answers, and then raced off to the next location. It was engaging, collaborative, and a competition which helped to energize the educators on the last day of the conference. Frozen Planet: Explore the polar regions Click on the image below to start exploring the Arctic and Antarctic. You can access geographic information provided by Arctic and Antarctic experts, watch videos of the wildlife in each region, and see important historical events as people explore the polar regions. Copyrighted image Credit: The Open University Launch Frozen Planet 9 Special thanks to British Antarctic Survey 10 for their assistance in developing this interactive map.

Want to Build a New App? There's an App for That, Too Competition in Apple’s App Store is so tough that even strong concepts must be planned to perfection before any development should start. So enter App Cooker: A hot new iPad app that makes sure other apps have the right ingredients in place before any development begins. App Cooker ($19.99) from Sophia-Antipolis, France-based Hot Apps Factory helps aspiring designers organize, plan and get app projects ready for production. Open Source Alternative to MS Office Microsoft Office is an office suite of desktop applications, servers and services for the Microsoft Windows and Mac OS X operating systems, introduced by Microsoft on August 1, 1989. Initially a marketing term for a bundled set of applications, the first version of Office contained Microsoft Word, Microsoft Excel, and Microsoft PowerPoint. Office is reported to now be used by over a billion people worldwide. Microsoft Office is glossy.

12 Sites and Apps for Learning to Code When the conversation amongst educators turns to programming, Scratch is often the first resource that is mentioned. Scratch allows students to program animations, games, and videos through a visual interface. Students create their programs by dragging together blocks that represent movements and functions on their screens. The blocks snap together to help students see how the "if, then" logic of programming works. Digital Library for Earth System Education Climate Change and Colorado's Future Climate change is real and it is occurring faster than originally predicted. In this video series, scientists explain how climate change is affecting the state of Colorado, while citizens share stories and solutions. One of the more recent videos features an interview with University of Colorado Boulder Professor Emeritus Al Bartlett on the "arithmetic of growth".

100 Ways to Use Your iPod to Learn and Study Better If you don’t have an iPad or an iPhone, no sweat! You can use your iPod for more than just listening to music. Educational apps available in the iTunes store can help you study and take notes like a pro! How to accelerate of Linux mint and similar You did install Linux mint and after some time you notice that the system starts to work slower than after the initial download. It depends on several factors: the basic configuration of the computer is not responding sufficiently to requirements of the system; it may be in the process of work were installed any programs that consume resources at boot time; perhaps in the startup, along with the defaults, were added additional programs that are also slow down the system, as they must be loaded into system memory before the system is fully launched, and more. Below are some small tricks by which you can improve system performance and accelerate Linux. 1. Manage the startup applications Startup applications, it is a tool, which is included in the default application and the ones you added to the startup in the process of installing additional software.