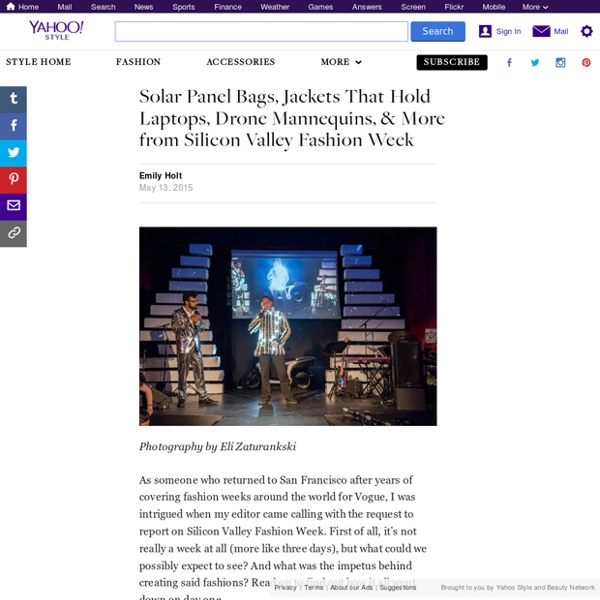 Photography by Eli Zaturankski As someone who returned to San Francisco after years of covering fashion weeks around the world for Vogue, I was intrigued when my editor came calling with the request to report on Silicon Valley Fashion Week. First of all, it’s not really a week at all (more like three days), but what could we possibly expect to see? And what was the impetus behind creating said fashions? Read on to find out how it all went down on day one. “[Burning Man] was the entry and inspiration for me to get into fashion. $265 & up -- All-Incl. “It was one of those, ‘Why the hell not things’,” Lindland said. Held at The Chapel, a music venue in San Francisco’s Mission neighborhood, the event drew sponsors including custom manufacturer PCH and retail app Shimmer and has been sold out for weeks. Tuesday’s night’s theme was “electric motion.” Mortgage Rates Have Dropped in Canada RateSupermarket.ca Sponsored His friend, Chris, chimed in, “Fashion can be anything.”

Lupita Nyong’o Loves a Flowy Dress Moment Lupita Nyong’o has only been a staple on step-and-repeats for a couple of short years, but the actress brings endless charm to what could be a dull and repetitive gig. Her fashions are always interesting, from her red Ralph Lauren cape moment to that pirate-inspired Prada ensemble she wore to the 2014 Met Ball. But it’s her seemingly favorite silhouette, a deep V-neck dress with full pleated skirt, that’s pure magic. Every time she’s worn this similarly cut kind of dress, she’s twirled and whirled the flimsy fabric to the delight of photographers and the Internet’s enthusiastic meme makers alike. For her Oscars debut, the Best Supporting Actress winner wore a custom light blue silk Prada gown that reminded her of Nairobi.

Ways To Grab Attractive Coupons From Jcpenney J.C Penney is one of the best known American retailers and is best known among the locals for its coupons it keeps offering its shoppers right from the start of the year 2012. The company once thought that by initiating the stream of fair and low prices on a periodic basis, it would be able to eliminate the necessity of coupons once for on, but somehow has introduced the scheme of coupons into its term as it realised that Americans love the concept of coupons and short term deals. It is easy to gain access to JCPenney coupons by either signing up for deals directly with the store or by getting them printed from online sites that sell JCPenney coupons. Ways to get JCPenney coupons from the store: Users could directly visit the website of JCPenney and connect with the tabs that allow them to get registered using their email addresses. After registering the store would email deals, discounts and coupons for its customers that could be used both at its stores and also at online shopping.

Bell-Sleeved Blouses For Every Budget Looking for a fresh way to sass up your jeans? Then clear out a special spot in your closet for the latest take on statement dressing: The bell-sleeved blouse. We can’t get enough of this fun and flirty top, as it’s the perfect pairing for just about any spring skirt, short or pant you can think of. Whether you’re buying on a budget or have some extra spending money in your pocket, you can score your own version of the up-and-coming trend today. How Dior’s Dior So Real Sunglasses Became a Street-Style Sensation (photo: Getty Images) As with any sweeping trend, this one started with Rihanna. During the Fall 2014 shows, the pop songstress’ first true show season tour de force, Rih arrived at the Dior presentation in Paris in a showstopping slipdress paired with thigh-high stockings, dripping diamond jewelry, and donning a red furry coat to match her crimson lipstick. It was a look that caused a minor Internet riot, though while many freaked over her sultry style, the element of her outfit that really took off was the Dior So Real mirrored sunglasses perched on her visage. The reflective and bridgeless specs became an overnight sensation.

Naomi Watts Really Loves This Snake Necklace One of the many perks of being a Bulgari spokesperson, is getting to wear some of the most amazing and expensive jewelry out there — and Naomi Watts certainly takes advantage of it. And while she most likely has her pick of the precious pot, the 46-year-old’s favorite seems to be the serpent necklace that she’s been spotted wearing time and time again. But while in the past, she’s opted for the diamond-encrusted serpent, at an event for Bulgari at tis year’s Cannes Film Festival, she instead opted for a gold version. Dear Silicon Valley Fashion Week, Where’s the New? Photo: Eli Zaturankski When you throw an event called Silicon Valley Fashion Week?, even with the question mark at the end, there are going to be expectations. We’re going to want to see Silicon Valley’s definition of fashion. We’re going to want to see how the tech industry will reimagine the things we put on our bodies.

Jennifer Lawrence is the New Face of Dior Beauty Photo Courtesy of Dior Jennifer Lawrence is already one of Dior’s best brand ambassadors. She’s been serving in the role since 2012 and her responsibilities have included appearing in their handbag campaign and strictly wearing the iconic French label on the red carpet. But now, the Hunger Games actress is adding the brand’s cosmetics collection to her already won-Dior-ful resumé. In the first official photos from the campaign, Lawrence’s hair is pulled back — which showcases her porcelain skin, and bold brows — and she has on subtle brown eye shadow, and a light pink lips (one of the 44 new shades in Dior’s new lipstick collection, which is set to relaunch on September 1). The very feminine and simple face is juxtaposed with not only her black leather and floral top, but the attitude she’s giving off her pouty lips and sharp stare as well.

Why it is Not Possible to Imagine JCP without Discounts? JC Penney group of super stores has been doing great lately under the leadership of Ron Johnson, the man who was behind the success of AAPL and Target stores. He has been working great and hard to wean the middle market customers of JCP from the common diet of coupons to the level of continuous and constant discounting. People do love this transaction and would continue to support the store as long as they are able to afford quality products at their best price. His strategy of everyday fair and square prices though is a welcoming feature was not like by few of its enthusiasts who have been overwhelmed with the concept of couponing and bargains through coupon codes. It was tough for the leaders in JCP to make people understand their marketing strategy, of selling products that were low priced they in fact wanted original items with high cost but marked with discounts.