Bell-Sleeved Blouses For Every Budget 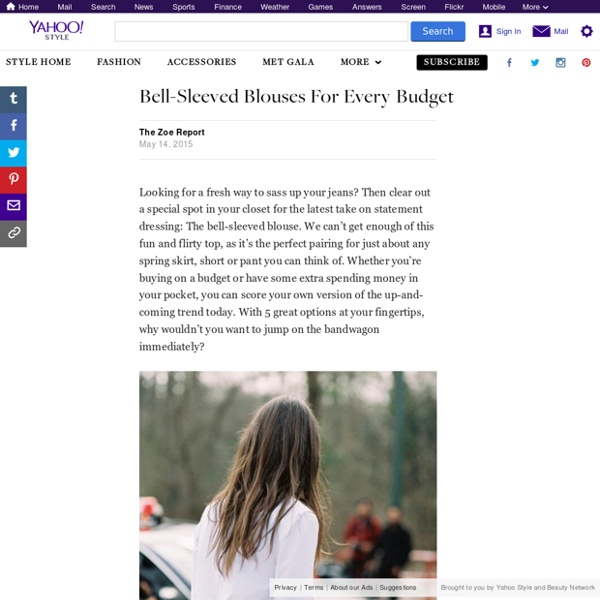 Looking for a fresh way to sass up your jeans? Then clear out a special spot in your closet for the latest take on statement dressing: The bell-sleeved blouse. We can’t get enough of this fun and flirty top, as it’s the perfect pairing for just about any spring skirt, short or pant you can think of. Whether you’re buying on a budget or have some extra spending money in your pocket, you can score your own version of the up-and-coming trend today. With 5 great options at your fingertips, why wouldn’t you want to jump on the bandwagon immediately? Photo: Vanessa Jackman Lolita Circle Sleeve V-Neck Shirt, Ellery $750 Related: The Best Shoes To Wear With Awkward-Length Pants Floral Bardot Top, Topshop $58 Bell Sleeve Lace Top, Kalmanovich $960

Here's Why Girl Meets World's Rowan Blanchard Was Never Your Traditional Disney Star Frazer Harrison/Getty Images If there's one Disney Channel star ready to take on the world, it may just be Rowan Blanchard. For three seasons, the actress was the heart and soul of Girl Meets World thanks to her friendship with Maya Hart (Sabrina Carpenter) and family bond with Cory and Topanga Mathews (Ben Savage and Danielle Fishel).

Fabric is Overrated at the 2015 Billboard Music Awards Whole dresses are so last year. These days, the cool kids are cutting chunks of fabric out of their outfits. Showing off your tight curves through a sheer layer of embellished mesh is pretty much reserved for Kim, Beyonce, and J.Lo. But cut-outs? They're fair game (if you're on your best game when it comes to working out, at least). Mariah Carey experimented with above knee cut-outs at the 2015 Billboard Music Awards, while E!'

Jennifer Lawrence is the New Face of Dior Beauty Photo Courtesy of Dior Jennifer Lawrence is already one of Dior’s best brand ambassadors. She’s been serving in the role since 2012 and her responsibilities have included appearing in their handbag campaign and strictly wearing the iconic French label on the red carpet. But now, the Hunger Games actress is adding the brand’s cosmetics collection to her already won-Dior-ful resumé. In the first official photos from the campaign, Lawrence’s hair is pulled back — which showcases her porcelain skin, and bold brows — and she has on subtle brown eye shadow, and a light pink lips (one of the 44 new shades in Dior’s new lipstick collection, which is set to relaunch on September 1). The very feminine and simple face is juxtaposed with not only her black leather and floral top, but the attitude she’s giving off her pouty lips and sharp stare as well.

Why New Mom Janet Jackson Needs Her Privacy More Than Most Janet Jackson was born to be famous. She might not have known it for a few years, but when she entered this world in 1966, she was joining a legendary musical dynasty in progress. The Jackson 5—featuring brothers Jackie, Tito, Jermaine, Marlon and then 6-year-old Michael Jackson, had already formed as The Jackson Brothers in 1964, and buoyed by their success, at 10 years of age Janet was entertaining America with her siblings on their TV variety show The Jacksons. But while the brothers would ultimately come in a distant second-through-fifth to the supremely talented Michael, and she was the youngest of nine children overall, it soon became clear that Janet Jackson was going to be a force to be reckoned with on her own. Janet also kicked off the acting portion of her career on the classic 1970s-era series Good Times and appeared on Different Strokes and Fame in the 1980s.

Joan Smalls Plays Pharrell Williams for CFDA Abbey Lee, Cara Delevingne, Rosie Huntington-Whiteley—plenty of models have caught the acting bug lately. But no one’s accepted a role as challenging as Joan Smalls. The supermodel plays Pharrell Williams in this year’s CFDA Journal. Every year, the Council of Fashion Designers of America produces an editorial featuring the year’s nominees and honorees. This year, Laird + Partners’ Trey Laird served as creative director, while photographer Barnaby Roper shot everyone from the Olsens (The Row is nominated for Best Womenswear Designer) to Mickey Drexler, who will take home the Founder’s Award.

jcpenney coupons Get extra 10% 20% 30% 40% and even some times 50% off with jcpenney coupon codes on selected products or on your entire purchase orders online. Some times get extra discount on entire purchase order or site with coupon code. This page will display mostly current jcpenney coupons and codes. Naomi Watts Really Loves This Snake Necklace One of the many perks of being a Bulgari spokesperson, is getting to wear some of the most amazing and expensive jewelry out there — and Naomi Watts certainly takes advantage of it. And while she most likely has her pick of the precious pot, the 46-year-old’s favorite seems to be the serpent necklace that she’s been spotted wearing time and time again. But while in the past, she’s opted for the diamond-encrusted serpent, at an event for Bulgari at tis year’s Cannes Film Festival, she instead opted for a gold version.

Target coupons Coupons, Other top stores 1-800-PetMeds Coupons 4inkjets Coupons Amazon Coupons Auto Parts Warehouse Coupons CheapOair Coupons Pacsun Coupons PetSmart Coupons Puritans Pride Coupons Target Coupons Wal-Mart.com Coupons Target printable coupons: These coupons are used at target in-stores and get extra savings around 10% to 30% and even you can get some of the products free of cost. But you need to take a print out and you can find them here.target printable coupons are really usefull who are purchasing target in-stores. Target coupon codes: Here you can find target coupon codes on individual products and its dollar off so these coupon codes saves you dollars but some times here you can find 10% to 20% extra saving on entire target site or group of products or a category or a brand. Use target coupon codes at checkout to get reflect right discount.

Target Coupons Online For 20% Entire Order Top Stores 1-800-PetMeds 4inkjets Amazon Auto Parts Warehouse CheapOair Pacsun PetSmart Puritans Pride Target Wal-Mart.com Target printable coupons: These coupons are used at target in-stores and get extra savings around 10% to 30% and even you can get some of the products free of cost. But you need to take a print out and you can find them here.target printable coupons are really usefull who are purchasing target in-stores. Target coupon codes: Here you can find target coupon codes on individual products and its dollar off so these coupon codes saves you dollars but some times here you can find 10% to 20% extra saving on entire target site or group of products or a category or a brand.

With Amal Clooney, We Finally Have the Consummate Feminist Superhero. Let’s Not Ruin It. (Photo: XPX/Star Max/Getty Images) By Heather Havrilesky Every time we glimpse her, Amal Alamuddin Clooney is bored. Flanked by tittering, self-congratulatory figures at the Met’s Costume Institute Gala, Amal alone is not impressed. Kerry Washington, Kristen Stewart & Lady Gaga Are All Fans of This New—Affordable–Red Carpet Brand Maisie Wiliams (Arya Stark on Game of Thrones) was the first to wear Self-Portrait on a major red carpet. I noticed because she looked fresh, I'd never seen the dress before, and it took me longer than usual to track down the designer. That was in January, at the SAG Awards.

9 Style Rules Every Working Woman Should Follow By Kat Collings Every office is different, but we think these hard-and-fast fashion rules are applicable to almost any workplace setting. Go ahead and check out our handy wardrobe guide to ensure you’re not the reason HR is sending out that dress code refresher. Rule 1: Your neckline should never be lower than 4 inches below your collarbone.