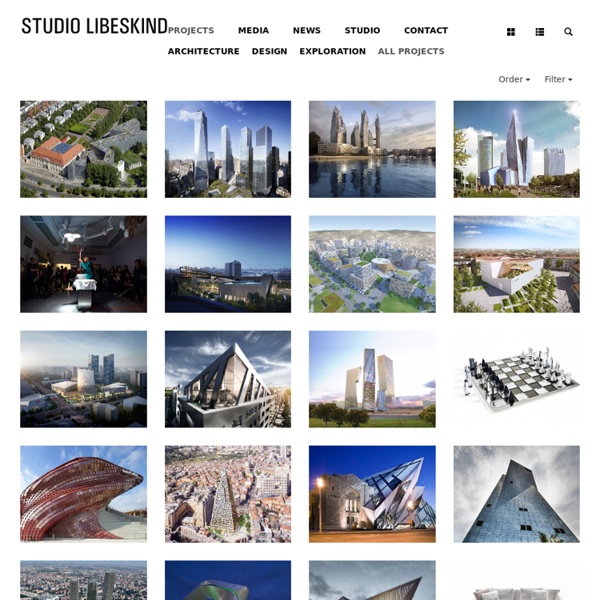 Libeskind wins Canada's National Holocaust Monument contest News: a design team featuring architect Daniel Libeskind and artist Edward Burtynsky has triumphed in a competition to design a National Holocaust Monument for Ottawa, Canada. The team led by museum planner Gail Dexter-Lord, which also features landscape architect Claude Cormier and university scholar Doris Berger, saw off entries from architect David Adjaye, designer Ron Arad and architect Gilles Saucier to land the commission for the monument. Entitled Landscape of Loss, Memory and Survival, the winning proposal is based on the form of a Star of David and will be prominently located in the heart of the Canadian capital, opposite the Canadian War Museum. The six points of the star are intended to "provides a unique theme and ambiance for interpretation, contemplation and artistic expression" and together will frame a large gathering space. The official inauguration of the monument is scheduled for autumn 2015.

RMJM the chinese-born american architect ieoh ming pei i.m.pei the chinese-born american architect ieoh ming pei is one of the most prolific architects of our times, an architect who has incorporated both eastern and western ideas into his designs. his buildings are a testament to how the convergence of two great traditions, the asian and the european, can create new aesthetic standards. in these month the world is looking at the state of the works of the german historical museum in berlin, here is the link to the museums webcam biography ieoh ming pei was born in april 26th, 1917 in canton, china, son of a prominent banker. his grandfather gave him several advices as 'wherever you go, go with your hart' and 'if one day you are doing important things, always do them by means of virtue and you will be like the north star, which keeps its place while all other stars turn towards it.' pei emigrated to the us at 17 to study architecture at m.i.t. 1 of 6 pages on i.m.pei, click on the icons to see more

home:projects2 [Minifie van Schaik Architects] An interpretative centre suspended over a RAMSAR wetlands. An interpretive veterinary hospital providing insight to our wildlife. This centre comprises a library, research and teaching spaces. A mixed use residential building in a Grocon CBD development. A 1,000 berth marina development in China. A new entrance to welcome visitors to the park and botanic gardens. Waterfront public domain design for Melbourne's Docklands. Master-plan for Edithvale Wetlands Centre in RAMSAR listed wetlands. A new library, student services and public concourse for RMIT's city campus A media centre, union facilities and a student information centre. A new building in the Alice Smith primary school campus A new building in the Alice Smith secondary school campus. A bridge and boardwalk connect Auckland to its harbour precinct. An Masterplan spanning over 9 square km near KL. A university in China enriched by a variety of spaces and buildings. Five proposals transform an important regional centre.

Modernism - Picture Dictionary of Modern Architecture The 1963 Beinecke Rare Book & Manuscript Library at Yale University Library is a Modernist building designed by SOM's Gordon Bunshaft. When did the modern era of architecture begin? Many people believe the roots of 20th century Modernity are with the Industrial Revolution (1820-1870). In 1896, the same year American architect Louis Sullivan gave us his form follows function essay, the Viennese architect Otto Wagner wrote Moderne Architektur—an instruction manual of sorts, A Guidebook for His Students to This Field of Art: "All modern creations must correspond to the new materials and demands of the present if they are to suit modern man; they must illustrate our own better, democratic, self-confident, ideal nature and take into account man's colossal technical and scientific achievements, as well as his thoroughly practical tendency -- that is surely self-evident!" Yet the word comes from the Latin modo, meaning "just now," which makes us wonder if every generation has a modern movement.

I. M. Pei I. M. Pei (b. Canton, China 1917) Ieoh Ming Pei was born in Canton, China in 1917. Pei worked as an instructor and then as an assistant professor at Harvard before he joined Webb & Knapp Inc. in New York in 1948. Due to his reliance on abstract form and materials such as stone, concrete, glass, and steel, Pei has been considered a disciple of Walter Gropius and Marcel Breuer, both of whom he studied with at Harvard. After building largely in concrete for many years, more recently Pei designed many sophisticated glass-clad buildings loosely related to the high-tech movement. References Dennis Sharp. Adolf K Placzek. Details AIA Architecture Firm Award, 1968AIA Gold Medal, 1979. International Style of Modern Architecture: Origins, Characteristics Richard Neutra The life of no other 20th-century architect so epitomized the term International Style as that of Richard Neutra (1892-1970), who gained worldwide recognition as an advocate of modern design. In the United States, he had a strong influence on architecture, particularly in California. In 1922 he came to America, where he worked briefly for Frank Lloyd Wright (1867-1959) at Taliesin and for Holabird and Roche in Chicago, an experience that formed the subject of his first book, Wie Baut Amerikal, published in Stuttgart in 1927. His design for the Lovell (Health) House (1929), Los Angeles, with balconies suspended by steel cables from the roof frame, was, in retrospect, one of the most important works of his career. Ludwig Mies van der Rohe Mies van der Rohe, the third and final head of the Bauhaus school, emigrated to Chicago in 1938, where he became director of architecture at the Armour Institute in Chicago (now the Illinois Institute of Technology, IIT). Philip Johnson

Gae Aulenti obituary | Art and design Gae Aulenti, the Italian architect of the Musée d'Orsay in Paris and a prolific designer of furniture, lighting and theatre sets, has died aged 84. Aulenti was one of the few women working in architecture and design in postwar Italy and her talents found a vast range of outlets, from showrooms for Fiat and Olivetti to sets for La Scala, the opera house in Milan, to private villas for the rich. But it is for her work in museums and exhibition design that she was best known – and for her largest project, which also proved to be her most divisive. She was chosen in 1981 to convert the Beaux Arts-style Gare d'Orsay railway station in Paris into a new home for impressionist art. Her proposal transformed the cavernous central hall, a magnificent barrel-vaulted train shed lit by arching rooflights, into an open exhibition space, with the insertion of modern industrial materials. "Aulenti has indulged herself in an aggressive orgy of ornamental excess," declared the Architects' Journal.

Wright on the Web Fallingwater | What is Fallingwater? Why is it so famous? It's a house that doesn’t even appear to stand on solid ground, but instead stretches out over a 30’ waterfall. It captured everyone’s imagination when it was on the cover of Time magazine in 1938. The Kaufmanns were from Pittsburgh, PA. The Kaufmanns lived in the city, but like many other Pittsburghers, they loved to vacation in the mountains southeast of Pittsburgh. Pittsburgh at the time was sometimes called the “Smoky City,” due to the amount of air pollution from Pittsburgh’s steel industry. The Kaufmanns had a summer camp for the department store employees, located along a mountain stream called Bear Run. Their summer camp home had been a very small cabin with no heat and no running water. They turned to Frank Lloyd Wright to design it for them. The Kaufmanns, who had recently become very interested in modern art and design, also were intrigued by Wright’s ideas, and they asked him to design a new vacation house.

Frank Lloyd Wright, Fallingwater | Architecture Frank Lloyd Wright, Fallingwater (Edgar J. Kaufmann House), 1935-38, Bear Run, Pennsylvania (photo: Carol M. Highsmith Archive, Library of Congress #LC-DIG-highsm-04261)Perched above a mountain cataract on a rocky hillside deep in the rugged forest of Southwestern Pennsylvania, some 90 minutes from Pittsburgh, is America’s most famous house. “the greatest architect of the nineteenth-century” —Philip Johnson The mid-1930s were among the darkest years for architecture and architects in American history; the country’s financial system had collapsed with the failure of hundreds of banks. In 1932 Henry-Russell Hitchcock and Philip Johnson opened the "Modern Architecture: International Exhibition" at the newly founded Museum of Modern Art in New York and simultaneously published the book International Style. A fellowship and a commission The Wrights devised an architectural apprenticeship program that came to be known as the “fellowship.” Fastest draw in the Midwest Organic architecture