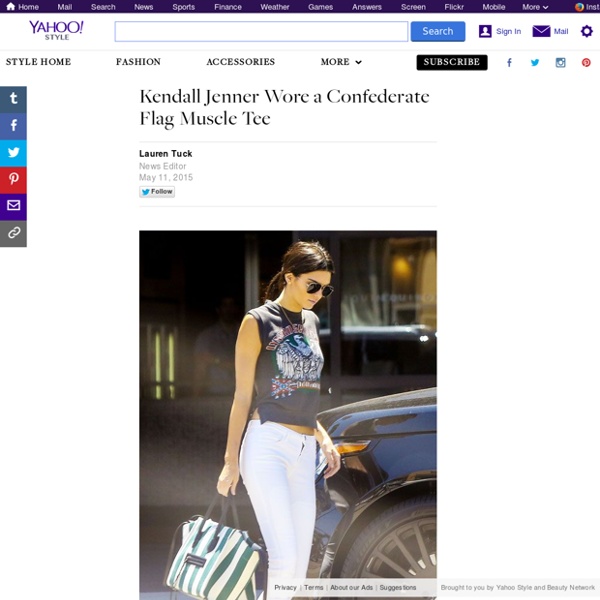 Photo: AKM-GSI Kendall Jenner has made some regrettable fashion choices in the past. She describes the outfit at the top of that list as “green denim pants, [a] full neon green” ensemble. But as her modeling career’s taken off, so has her style. Sort of. The 19-year-old slipped up this weekend. Lynyrd Skynyrd, the band on Jenner’s T-shirt, long used the Confederate flag, or the “Dixie” flag, as part of their logo. No annual fees with the Visa Cash Back card Jenner’s affiliation with the band and therefore the Confederate flag and therefore racism is most likely unintentional — Kanye West is her brother-in-law, her sister Khloe Kardashian is dating French Montana, and Kylie Jenner is going out with Tyga — but still boneheaded. Funny enough, her half-sister’s husband, West, has had some issues with the Southern cross in the past. Perhaps Jenner should have learned her lesson from the rapper’s past mistake: associating oneself with slavery is never good for one’s image.

Five Top Stylists on the Future of Fashion Even a cursory look at the Fall runways makes it clear that the industry’s top stylists are earning their keep, perhaps more than ever before. Here was a season that wore its eccentricities on its sleeve—and everywhere else. And while that unapologetic, Little Edie-esque sprezzatura spotted on runways from Gucci to Maison Margiela will surely be the province of fashion fans and street-style regulars alike by the time this story goes live, it took some of the industry’s most visionary eyes to champion it in the face of fashion-nun minimalism or, what’s arguably “worse,” normcore’s reign of tennis shoes and polo shirts. “I don’t really know what normcore’s aesthetic stands for,” offers Benjamin Bruno. “Being boring but pretending it’s conceptual? I think everyone OD’d on the ‘bland look.’

Jennifer Lawrence is the New Face of Dior Beauty Photo Courtesy of Dior Jennifer Lawrence is already one of Dior’s best brand ambassadors. She’s been serving in the role since 2012 and her responsibilities have included appearing in their handbag campaign and strictly wearing the iconic French label on the red carpet. But now, the Hunger Games actress is adding the brand’s cosmetics collection to her already won-Dior-ful resumé.

Sasha Fierce! Sasha Pivovarova’s 23 Best Runway Moments (Versace Spring 2010, Photo: Maria Valentino) Sasha Pivovarova’s beauty is a given, but it’s her intensity on the runway that made her a star. Since debuting on Prada’s Fall catwalk back in 2005, Pivovarova has made a name for herself by playing up the spooky side of her alien looks and putting those wide eyes and sunken cheekbones to good use in theatrical shows for the biggest names in fashion. Though she’s malleable enough to take on any character a designer can dream up, Pivovarova is at her best when she’s playing peculiar for iconoclasts like John Galliano or Alexander McQueen. In recent years, she’s softened her severity, taking time off from the runway to become an artist, but there’s still something wonderful about seeing her vamp her way down the catwalk.

The Endearing Allure of ’60s-Inspired Fashion (photo: Venetia Scott) Miu Miu coat, $2,130, and top, $830, miumiu.com; Charvet scarf, $215, charvet.com; ring, $985, and vintage moonstone and diamond ring, $1,250, both from Doyle & Doyle, New York, doyledoyle.com; gold woven bracelet, $2,250, and gold link bracelet, price upon request, both from Camilla Dietz Bergeron, New York, cdbltd.com; Delvaux bag, $6,000, barneys.com; stylist’s own watch. Photography by Venetia ScottStyled by Poppy Kain Buying a home? Find out how much you can afford. Lupita Nyong’o Loves a Flowy Dress Moment Lupita Nyong’o has only been a staple on step-and-repeats for a couple of short years, but the actress brings endless charm to what could be a dull and repetitive gig. Her fashions are always interesting, from her red Ralph Lauren cape moment to that pirate-inspired Prada ensemble she wore to the 2014 Met Ball. But it’s her seemingly favorite silhouette, a deep V-neck dress with full pleated skirt, that’s pure magic.

7 Ways to Wear a Light Flight Jacket Photo: Alex’s Closet It’s finally about that time of year when you can just throw on a light jacket and walk out the door. With the sporty outerwear trend at its peak, this week, we saw bloggers around the world wearing flight jackets in all kinds of colors and fabrics. Kerry Washington, Kristen Stewart & Lady Gaga Are All Fans of This New—Affordable–Red Carpet Brand Maisie Wiliams (Arya Stark on Game of Thrones) was the first to wear Self-Portrait on a major red carpet. I noticed because she looked fresh, I'd never seen the dress before, and it took me longer than usual to track down the designer. That was in January, at the SAG Awards. Since then, Reese Witherspoon and Lucy Hale have worn the lacy looks. Most recently, Kerry Washington and Kristen Stewart, two women who mark opposite ends of the sartorial spectrum, both wore the brand.

Everything You Need to Know About Teen Activist-Turned-Model Avery McCall (photo: Michele Morosi / Indigitalimages.com) Most models begin their careers with goals centered around catwalk appearances or magazine covers, but newcomer Avery McCall started with a clear objective: using her fame to promote social causes. Last season the Chicagoan teen kick-started her career by walking Alexander McQueen and Christopher Kane, but with icons like Hillary Clinton and Diane von Furstenberg serving as inspiration, McCall hopes to merge fashion and activism. We checked in with the fresh face to find out how she’s doing it. Now that you’re modeling, how have you found that it has aided you in your goal of making a social difference?

Solar Panel Bags, Jackets That Hold Laptops, Drone Mannequins, & More from Silicon Valley Fashion Week Photography by Eli Zaturankski As someone who returned to San Francisco after years of covering fashion weeks around the world for Vogue, I was intrigued when my editor came calling with the request to report on Silicon Valley Fashion Week. First of all, it’s not really a week at all (more like three days), but what could we possibly expect to see? And what was the impetus behind creating said fashions?

Waist Training: How to Layer a Corset (Photo: Adam Katz Sinding / Le 21ème) A closetful of clothing but nothing to wear? We know the feeling. Instead of reaching for your go-to jeans and blouse, consider layering disparate pieces in your wardrobe—like a button-down and corset. Irina Lakicevic expertly paired a strapless wool bustier over a simple button-down to stay warm during New York’s Polar Vortex, and elsewhere, we saw girls getting creative with strappy black bra tops and harnesses. Dear Silicon Valley Fashion Week, Where’s the New? Photo: Eli Zaturankski When you throw an event called Silicon Valley Fashion Week?, even with the question mark at the end, there are going to be expectations.