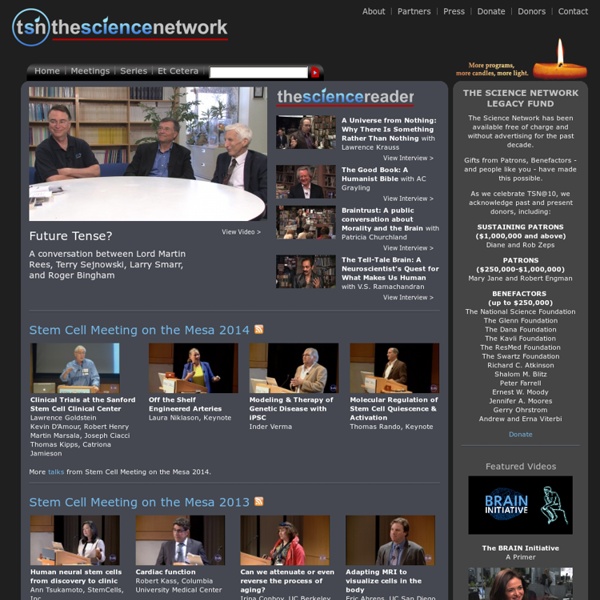 The Science Network has been available free of charge and without advertising for the past decade. Gifts from Patrons, Benefactors - and people like you - have made this possible. As we celebrate TSN@10, we acknowledge past and present donors, including: SUSTAINING PATRONS ($1,000,000 and above)Diane and Rob Zeps PATRONS ($250,000-$1,000,000)Mary Jane and Robert Engman BENEFACTORS (up to $250,000)The National Science FoundationThe Glenn FoundationThe Dana FoundationThe Kavli FoundationThe ResMed FoundationThe Swartz FoundationRichard C.

Light as a Growth Regulator: Controlling Plant Biology with Narrow-bandwidth Solid-state Lighting Systems + Author Affiliations Abstract In the mission of plant husbandry, light is a critical yet passive entity. The potential to actively implement dynamic lighting strategies to control plant growth and development holds great promise in the future of plant cultivation. In other words, rather than simply using a single stable light condition to maintain photosynthesis, might it be possible to continually adjust fluence rate, wavelength combinations, and photoperiods to actively manipulate plant morphology and production?

Journal home : Nature Raphael Lis, Charles C. Karrasch, Michael G. Poulos, Balvir Kunar, David Redmond, Jose G. NASA Kids Club Skip to main content NASA Kids Club › Text Only Site Peculiar Pluto Read About It! Star Fall 125 Great Science Videos: From Astronomy to Physics & Psychology Astronomy & Space Travel A Brief, Wondrous Tour of Earth (From Outer Space) - Video - Recorded from August to October, 2011 at the International Space Station, this HD footage offers a brilliant tour of our planet and stunning views of the aurora borealis.A Universe from Nothing - Video - In 53 minutes, theoretical physicist Lawrence Krauss answers some big enchilada questions, including how the universe came from nothing.A Year of the Moon in 2.5 Minutes - Video - The Lunar Reconnaissance Orbiter has been orbiting the moon for over a year. The footage gets compressed into 2 slick minutes.A Day on Earth (as Seen From Space) - Video - Astronaut Don Pettit trained his camera on planet Earth, took a photo once every 15 seconds, and then created a brilliant time-lapse film.Atlantis's Final Landing at Kennedy Space Center - Video - After more than 30 years, the space shuttle era comes to a close.

A Helmet That Slows Down Time, Without The Drugs Last week, NPR’s Adam Frank introduced us to a scientist who is suggesting that human reality is actually just a complex piece of software. German interaction designer Lorenz Potthast, meanwhile, is writing software that lets humans alter their own reality. Potthast is the creator of the Decelerator Helmet, an experimental device that slows down the wearer’s surroundings, significantly changing the way they experience time. What's That Stuff? You might ask yourself... What's That Stuff? Ever wondered about what's really in hair coloring, Silly Putty, Cheese Wiz, artificial snow, or self-tanners? C&EN presents a collection of articles that gives you a look at the chemistry behind a wide variety of everyday products. Virtual Knee Surgery Activity Home Teacher's Guide Glossary Credit & Thanks Take on the role of the Surgeon throughout a total knee replacement surgery. Activity Home

5 TED Talks on Science That Will Blow Your Mind Andrew Maynard is a scientist and emerging technology adviser. He blogs at 2020 Science and tweets as @2020science. Some of the most entertaining, informative and mind-blowing science videos on the web come from TED – the Technology, Entertainment, Design conference.