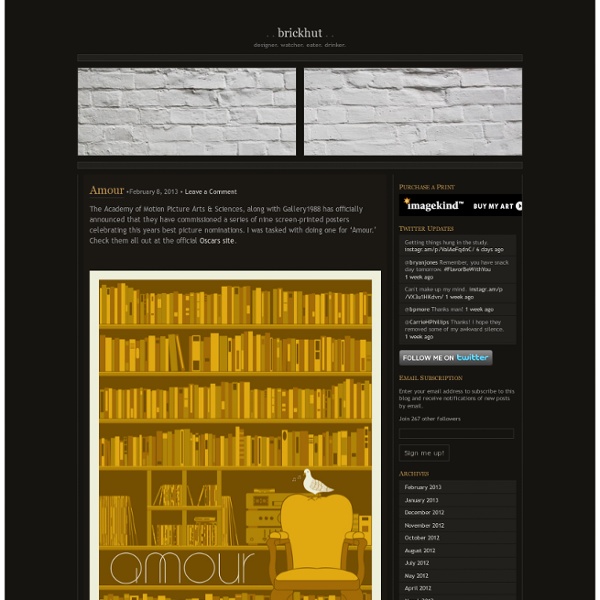 LACMA Live Read – ‘The Graduate’ •April 14, 2014 • Leave a Comment This will be the final Live Read for the season, and it’s going to be a great one. Jason Reitman will be directing ‘The Graduate’ on April 17th. My wife and I will be heading out to LA to see this one. We’re really excited.

Everything Ages Fast (Facebook, Youtube, Twitter, and Skype) These posters are part of an ad campaign entitled “Everything Ages Fast,” designed by Moma Propaganda and created for client Maximidia Seminars Link via Laughing Squid How To Typeset a Poster Bowne & Co., Stationers at the South Street Seaport Museum in New York frequently produces beautiful letterpress keepsakes. This one from 1989, “Nineteenth Century Job Printing Display – The Poster” is a delightful little guide to the dos and don’ts. Using their enviable stock of metal types, 200 copies were printed on a Vandercook Universal I. the text was adapted from “The Letter-Preess Printer: A Complete Guide to the Art of Printing; Containing Practical Instructions for Learners at Case, Press and Machine” (London, 1881).

Post-apocalyptic Tokyo scenery 19 Aug 2010 The illustrations of TokyoGenso (a.k.a. Tokyo Fantasy) depict a post-apocalyptic Tokyo devoid of people and overtaken by nature. Shinjuku skyline [+] New Page 1 Back to ContentsRubik's Cube Solution: How to put together a mixed-up Rubik's cube, most of the time with your eyes closed, and manipulating the cube above your head, or behind your back. My record time using this method was 2 minutes 13 seconds. Just memorize the following formula (it's easy!), and only look at the cube briefly after each "move." *** High-speed internet recommended to download this web page, which was scanned as .BMP from 14 separate pages of instructions i wrote by hand in 1986...

A former Cement Factory is now the workspace and residence of Ricardo Bofill Image Courtesy of Ricardo Bofill Architect: Ricardo BofillProgram: Architectural offices /archives /model laboratory /exhibition space /Bofill's-apartment /guest rooms /gardensLocation: Barcelona, SpainTotal floor area: 3,100 square meters and gardensHouse area: 500 square metersDate Completed: 1975 There is nothing as good as an aged bottle of wine; and in this case the aged bottle of wine is a project which was completed in 1975, but is still worth mentioning! The World's Biggest Cave National Geographic presents The World's Biggest Cave, a TV special that gives us a close-up look at Son Doong, a huge recently-discovered underground labyrinth in Vietnam. In 2009, a team of British cavers investigated a recently uncovered cave in a remote Vietnamese jungle. The Son Doong cave is enormous; can it be larger than the current world-record holder?

Satirical Art Drawings by Pawel Kuczynski Fun Pic, Pop Culture — By Dave on 2011/02/28 1:48 PM These beautiful works of art are from Polish artist Pawel Kuczynski. Pawel was born in 1976 in Szczecin. He graduated the Fine Arts Academy in Poznan with specialization in graphics. He is famous for his satirical illustrations that make you wonder about society, politics and all the biggies in life. Join Daily Picks and Flicks on Facebook