Why Schools Need to Bring Back Shop Class 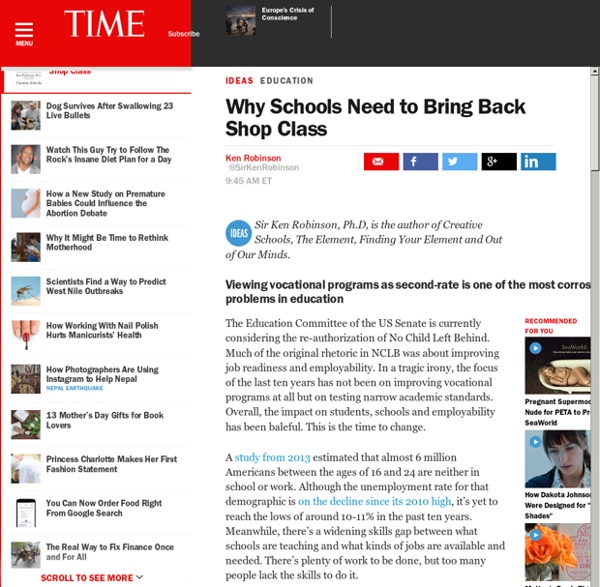 Sir Ken Robinson, Ph.D, is the author of Creative Schools, The Element, Finding Your Element and Out of Our Minds. The Education Committee of the US Senate is currently considering the re-authorization of No Child Left Behind. Much of the original rhetoric in NCLB was about improving job readiness and employability. In a tragic irony, the focus of the last ten years has not been on improving vocational programs at all but on testing narrow academic standards. A study from 2013 estimated that almost 6 million Americans between the ages of 16 and 24 are neither in school or work. In practice, our communities — and economies — depend on an enormous diversity of talents, roles, and occupations. As with many schools in the United States, the shop program at Analy High School in Sebastopol, California, had become largely irrelevant. Casey Shea, a teacher at Analy, ran with the idea. The program is doing much more than showing kids how to use a vinyl cutter.

The Natural Teacher: 10 Ways You Can Add Vitamin "N" to the Classroom & Beyond Not long ago I met some dedicated young women who were doing their student teaching at an impressive nature-based preschool. They made it clear that they’d love to pursue careers at similar schools. But they were discouraged about the prospects. Despite growing demand from parents, the number of nature-based preschools remains relatively low. “Is there a business school at your university?” I asked. Why not? Probably because it doesn’t exist. That’s where the growing children and nature movement comes in. 1. 2. Here’s how to join C&NN’s Natural Teachers Network. 3. Two great programs lead the way. 4. Added note: one study shows that educators who get their students outside are more likely to retain their enthusiasm for teaching. 5. 6. 7. 8. 9. Unfortunately, Vanderberg has been transferred to another school, and the Crenshaw club no longer officially exists. 10. Illustration courtesy of © Rob Shepperson

Some study that I used to know: What do you remember from high school? Author Note: This is the first YouTube video I've tried "flipping" into a TEDed lesson, as I work to learn how to make best use of the new TEDed platform for making videos into interactive lessons. I'd welcome encouragement, feedback and questions from others trying it out.~~~An idea for an extension project:Goyte's song, "Somebody I used to Know" has been covered and parodied by several other artists. For example, Walk of the Earth, created their one-cut video showing the 5 band members playing the whole song on one guitar. Then Key of Awesome made a popular parody of WOTE's video.Songs are often more memorable than spoken language. Parodies can be a useful way of tying something new to something already familiar, making it more memorable.

To Find Work You Love, Don’t Follow Your Passion | Benjamin Todd (Video) 43 6Share Synopsis Mainstream career advice tells us to “follow our passion”, but this advice is dead wrong. Research shows that people who take this approach are ultimately no more likely to enjoy or excel at their jobs. Instead, if you’re looking for a fulfilling career, here’s a new slogan to live by: Do what’s valuable. What does this mean for your own career? Article Featured Image credit: 80000hours.org

Engaging Contrarians: Tricksters and Blue Man Group 14 3Share Synopsis In the 21st century, the tricksters’ strengths are essential for solving problems. We need strategies to engage these characteristics in the classroom so that they may develop productively. “As a student in elementary school, high school, and in university, I was disruptive on occasion. The reality is that most of us don’t know what to do with divergent viewpoints; they catch us off- guard and make us feel out of control. Students with divergent viewpoints or non-conformist tendencies often are highly creative thinkers. History shows that many of the greatest thinkers and contributors were such contrarians (Goertzel, Goertzel, Goertzel, & Hansen, 2004), and it is known that questioning is a valuable component of creativity that leads to innovation (Berger, 2014). Blue School, formed by Blue Man Group founders and their wives in 2006, does all of the above and more. Of course, we all have the capability to take on and express the qualities of any of these lenses.

Brain Scans Show The Real Impact Love Has On A Child’s Brain by Editor You comfort them over a skinned knee in the playground, and coax them to sleep with a soothing lullaby. But being a nurturing mother is not just about emotional care – it pays dividends by determining the size of your child’s brain, scientists say. Shocking: According to neurologists the sizeable difference between these two brains has one primary cause – the way were treated by their mothers Both of these images are brain scans of a two three-year-old children, but the brain on the left is considerably larger, has fewer spots and less dark areas, compared to the one on the right. According to neurologists this sizeable difference has one primary cause – the way each child was treated by their mothers. But the child with the shrunken brain was the victim of severe neglect and abuse. Babies’ brains grow and develop as they interact with their environment and learn how to function within it. This type of severe, global neglect can have devastating consequences. Lead author Joan L.

What Students Want 42 1Share Synopsis Teacher empathy supports student growth, confidence. It all comes down to people, doesn't it? You may remember Ramona Quimby as the curious, imaginative girl whose kindergarten experience is brought to life in Beverly Cleary’s children’s book, Ramona the Pest. Ramona’s thoughts and actions suggest that she is a highly creative child who has a hard time conforming to the mold. Children who are divergent thinkers often don’t understand themselves until they are understood by a perceptive adult. It is said over and over again that Ramona wants to be good. At one point, Ramona is reprimanded for pulling a girl’s hair and becomes convinced that Miss Binney no longer loves her. Ramona’s experience reflects the experience of many educators. However, like Ramona Quimby, sensitive children can easily misinterpret teachers’ words or actions. Did I ever dislike the student? Kathryn P. References: Cleary, B. (2013). Robinson, K. (2015). © 2015 Sparkitivity, LLC.

If We Don't Teach Peace, What Are We Teaching? By David Cook / yesmagazine.org Earlier this year, I walked into the university classroom where I teach a course in Peace Studies. Seated in a circle around the room were seniors just shy of graduating. They would soon become doctors, social workers, teachers, community organizers, executives, and leaders. To open our semester together, I wrote a simple, three-word question on the board. Silence. Each year in the United States, millions of students graduate from high school and college, their diplomas certifying years spent studying the principles of science, mathematics, literature, and writing. Yet these very same students will graduate without ever once studying conflict resolution. We are neglecting to teach our students the most fundamental and urgent lesson: how to make peace in the world around them. If we don’t teach our children peace, someone else will teach them violence.’ Dismantling the Violence But this is changing. Those problems are many. To Teach Peace is to Teach Gandhi

Is This How We Are Forced to View The World In A Certain Way? John Taylor Gatto a retired school teacher explains how the education system is used to force people to view the world in a certain way. He uses the “Fleas in a jar” experiment to explain his analogy. In the experiment, a scientist placed a number of fleas in a glass jar. Note: Fleas are not “trained”, that’s a marketing term to “sell” the effect. Trending on the Web What is Education For? – The Data Trap – Denise Cook By Denise Cook, Wellington College Two recent education news stories, the proposal to introduce ‘base-line testing’ for 4 year olds*, and the argument about whether 40% of PGCE students drop out within a year*, or whether it’s ‘only’ 20%, confirm my growing suspicion that we’re caught in a data trap*, and that much of what passes for educational debate is centred around the benefits, or otherwise, of measuring stuff just because it can be measured. The pre-occupation with data provides an ideal bait and switch: instead of debating educational philosophy or the ideas and ideals that brought us into teaching in the first place, teachers find ourselves arguing over whose numbers are correct, as if defending or disproving the numbers defends or disproves the validity of claims about the meaning, purpose and effects of the way we do schooling. What is it all for? Asking ‘What is education for?’ Asking ‘What is education for?’ *what my colleague Carl Hendrick calls the McNamara fallacy.

A must read for teachers, parents and employers - Educating Ruby Available in paperback and eBook format. Educating Ruby: what our children really need to learn – the book, linked to authors Guy Claxton and Bill Lucas’ campaign, is for teachers, parents, grandparents, employers and anybody interested in the current education system. Read it and have the confidence to stand up and have your say on the future of education. Everyone knows schools need rethinking – our political and educational worlds teem with critiques and proposals. The book includes: Foreword by Professor Tanya Byron Foreword by Octavius Black Causes for concern Why old school won’t work Competence and character What’s worth learning these days? About the authors: Prof Guy Claxton is Emeritus Professor at the University of Winchester and Visiting Professor of Education at King’s College London. Prof Bill Lucas is Director of the Centre for Real-World Learning at the University of Winchester. Other books by the authors include: