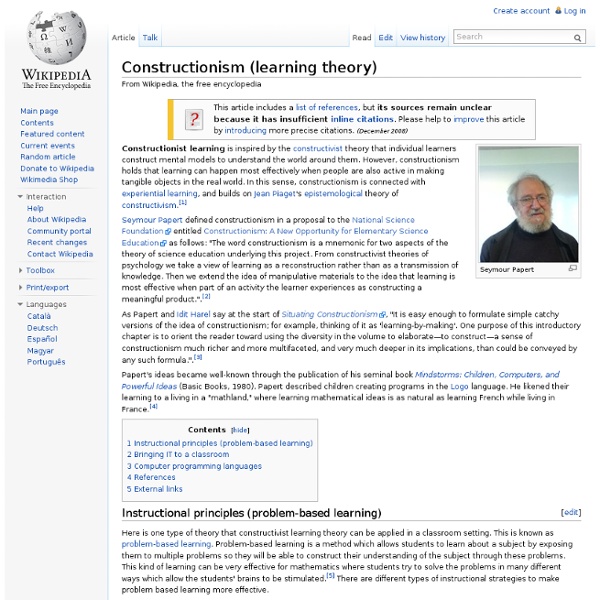 Seymour Papert Seymour Papert defined constructionism in a proposal to the National Science Foundation entitled Constructionism: A New Opportunity for Elementary Science Education as follows: "The word constructionism is a mnemonic for two aspects of the theory of science education underlying this project. From constructivist theories of psychology we take a view of learning as a reconstruction rather than as a transmission of knowledge. Then we extend the idea of manipulative materials to the idea that learning is most effective when part of an activity the learner experiences as constructing is a meaningful product.".[2] As Papert and Idit Harel say at the start of Situating Constructionism, "It is easy enough to formulate simple catchy versions of the idea of constructionism; for example, thinking of it as 'learning-by-making'. Here is one type of theory that constructivist learning theory can be applied in a classroom setting. 1. 2. 3. 4. 5. Jump up ^ Cakir, M. (2008).

Constructivism Jean Piaget: founder of Constructivism In past centuries, constructivist ideas were not widely valued due to the perception that children's play was seen as aimless and of little importance. Jean Piaget did not agree with these traditional views, however. He saw play as an important and necessary part of the student's cognitive development and provided scientific evidence for his views. Today, constructivist theories are influential throughout much of the non-formal learning sector. For more detailed information on the philosophy of the construction of human knowledge, see constructivist epistemology. Formalization of the theory of constructivism is generally attributed to Jean Piaget, who articulated mechanisms by which knowledge is internalized by learners. When individuals assimilate, they incorporate the new experience into an already existing framework without changing that framework. It is important to note that constructivism is not a particular pedagogy.

Connectivism Connectivism is a hypothesis of learning which emphasizes the role of social and cultural context. Connectivism is often associated with and proposes a perspective similar to Vygotsky's 'zone of proximal development' (ZPD), an idea later transposed into Engeström's (2001) Activity theory.[1] The relationship between work experience, learning, and knowledge, as expressed in the concept of ‘connectivity, is central to connectivism, motivating the theory's name.[2] It is somewhat similar to Bandura's Social Learning Theory that proposes that people learn through contact. The phrase "a learning theory for the digital age"[3] indicates the emphasis that connectivism gives to technology's effect on how people live, communicate and learn. Nodes and links[edit] The central aspect of connectivism is the metaphor of a network with nodes and connections.[4] In this metaphor, a node is anything that can be connected to another node such as an organization, information, data, feelings, and images.

Logo (programming language) "Logo" is not an acronym. It was derived from the Greek logos meaning word or "thought" by Feurzeig,[3] to distinguish itself from other programming languages that were primarily numbers, not graphics or logic, oriented. Logo is generally known as an interpreted language, although recently there have been developed compiled Logo dialects—such as Lhogho or Liogo. Multiple turtles are supported by MSWLogo, as well as 3D graphics. Turtle geometry is also sometimes used in environments other than Logo as an alternative to a strictly coordinate-addressed graphics system. Although there is no single agreed-upon standard, there is a broad consensus on core aspects of the language. Apple Logo, developed by LCSI, was the most broadly used and prevalent early implementation of Logo that peaked in the early to mid-1980s, largely due to marketing by Apple's Apple II computer. The closest thing to a de facto standard Logo today is UCBLogo, also known as Berkeley Logo.

Educational Technology Educational technology is the effective use of technological tools in learning. As a concept, it concerns an array of tools, such as media, machines and networking hardware, as well as considering theoretical perspectives for their effective application.[1][2] Educational technology includes numerous types of media that deliver text, audio, images, animation, and streaming video, and includes technology applications and processes such as audio or video tape, satellite TV, CD-ROM, and computer-based learning, as well as local intranet/extranet and web-based learning. Information and communication systems, whether free-standing or based on either local networks or the Internet in networked learning, underlie many e-learning processes.[6] Educational technology and e-learning can occur in or out of the classroom. It can be self-paced, asynchronous learning or may be instructor-led, synchronous learning. Definition[edit] Scope[edit] Related terms[edit] History[edit] Cassandra B. Theory[edit]

TeacherTube.com An Introduction to Connective Knowledge ~ Stephen&#039;s Web ~ b You are not logged in. [] [] Revised and Updated (minor corrections and typos only) and placed in MS-Word Document form, November 27, 2007. Click here . The version that follows below is the original (uncorrected) version). Yet another article, describing new forms of knowledge as probablistic , has crossed my desk today, and consequently it seems appropriate at this time to type a few words on the nature of distributed knowledge. It should go without saying that these are my own thoughts, and this discussion should not therefore be considered an authoritative reference on the subject. a. You probably grew up learning that there are two major types of knowledge: qualitative and quantitative. Distributed knowledge adds a third major category to this domain, knowledge that could be described as connective. This is more than just the existence of a relation between one entity and another; it implies interaction. Probabilistic knowledge is a type of quantitative knowledge. b. c. d. e. f. g.

82. THE MOUSE AND THE WEASEL (Aesop for Children, 1919) Aesop for Children (1919) A little hungry Mouse found his way one day into a basket of corn. He had to squeeze himself a good deal to get through the narrow opening between the strips of the basket. But the corn was tempting and the Mouse was determined to get in. At last he felt satisfied and dragged himself to the opening to get out again. Just then a Weasel came by. "My friend," he said, "I know what you've been doing. And that was all the sympathy the poor Mouse got. Greediness leads to misfortune.

Gamestar Mechanic Connectivism &amp; Connective Knowledge Week 9 is a conference week, focusing on Net Pedagogy. This will be a great opportunity to reflect on how social networks and networked technology impact how we teach and learn. We’ve lined up five excellent speakers for the week: Martin Weller Title: Is there a pedagogy of abundance? Description: In a digital age we have seen a fundamental shift in many of the basic economic models underlying industries as they move from an economic model based on scarcity to one based on abundance. Time: Wed, November 11. Frances Bell Title: Transparent Teaching and Learning: what remains when the teacher disappears Description: This session’s deliberately ambiguous title (is it a statement or a question?) · Do we need teachers? · What remains when the teacher disappears? · What informs teachers’ practice? I hope you can join us and answer my questions. Time: Wed, November 11 Time Conversions 2000 GMT Stephen Downes Title: Open Education: Projects and Potential [webcast of an f2f presentation] Description:

www.vevo Are you a internet geek like me or a casual user when it comes to using the Internet. It really doesn’t matter which category you fall into. Let me just tell you guys how I was and how I turned myself to a pro level when it comes to Windows. It all started when the internet was booming with PC to browse the internet.I used to browse all the sites which I ever liked without even aware of the fact how I am exposing my pc to the dark world of hackers,viruses,malwares and trojans. After some days my windows used to act weird and do all sorts of nonsense stuff like shutting down,files getting infected, unwanted pop ups and notifications.I was not aware what was the real culprit behind this. As time went by internet was getting huge, had a lot of antivirus packages to choose from.Tryed but liked few. Why will I recommend this when there are tons to choose from? Whatever you download, do it from main servers verify again to see you are not redirected away to another site.

Gary Hamel on Managing Generation Y - the Facebook Generation - Gary Hamel’s Management 2.0 ByGary Hamel The experience of growing up online will profoundly shape the workplace expectations of “Generation F” – the Facebook Generation. At a minimum, they’ll expect the social environment of work to reflect the social context of the Web, rather than as is currently the case, a mid-20th-century Weberian bureaucracy. If your company hopes to attract the most creative and energetic members of Gen F, it will need to understand these Internet-derived expectations, and then reinvent its management practices accordingly. With that in mind, I compiled a list of 12 work-relevant characteristics of online life. 1. 2. 3. 4. 5. 6. 7. 8. 9. 10. 11. 12. These features of Web-based life are written into the social DNA of Generation F—and mostly missing from the managerial DNA of the average Fortune 500 company. So, readers, here’s a couple of questions: What are the Web-based social values that you think are most contrary to the managerial DNA one finds inside a typical corporate giant?