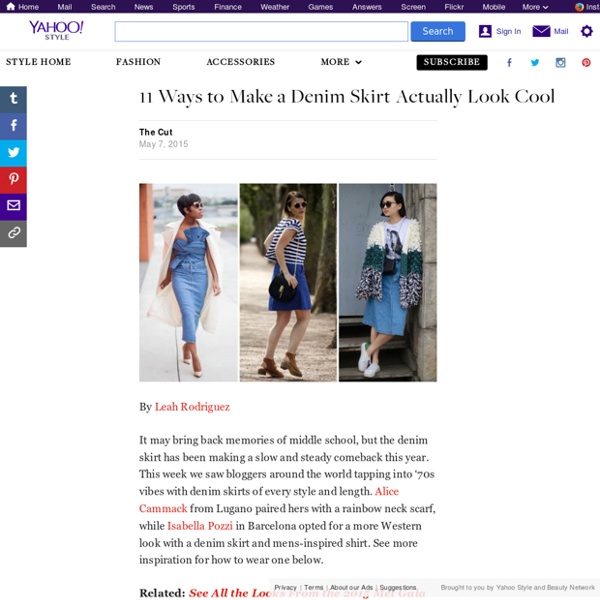 Skip directly to primary article Skip directly to list of articles Style HomeFashionAccessoriesMet GalaPop/CultureWeddingsMenExclusiveA to ZeeVideoBeauty More  Subscribe View on Instagram Follow Style Home Fashion Accessories Yahoo will use this information to send you a one time email. Sign up to get the best of Yahoo Style, delivered weekly to your inbox! Yahoo will use this information to send you a weekly email newsletter. Please enable Javascript Javascript needs to be enabled in your browser to use Yahoo Style. Here’s how to turn it on: 11 Ways to Make a Denim Skirt Actually Look Cool The Cut By Leah Rodriguez It may bring back memories of middle school, but the denim skirt has been making a slow and steady comeback this year. Related: See All the Looks From the 2015 Met Gala Red Carpet Shot in Madrid for Trini, via Chictopia. Related: 15 Ways to Wear a Light Flight Jacket Enocha, shot in Los Angeles for Locks and Trinkets. Related: 14 Ways to Wear a Jumpsuit This Spring Desjardins Sponsored Food Style

Everything You Need to Know About Teen Activist-Turned-Model Avery McCall (photo: Michele Morosi / Indigitalimages.com) Most models begin their careers with goals centered around catwalk appearances or magazine covers, but newcomer Avery McCall started with a clear objective: using her fame to promote social causes. Last season the Chicagoan teen kick-started her career by walking Alexander McQueen and Christopher Kane, but with icons like Hillary Clinton and Diane von Furstenberg serving as inspiration, McCall hopes to merge fashion and activism. We checked in with the fresh face to find out how she’s doing it. Now that you’re modeling, how have you found that it has aided you in your goal of making a social difference? I’m definitely very new to the modeling world, and so I’m still trying to figure this out.

Kendall Jenner Wore a Confederate Flag Muscle Tee Photo: AKM-GSI Kendall Jenner has made some regrettable fashion choices in the past. She describes the outfit at the top of that list as “green denim pants, [a] full neon green” ensemble. But as her modeling career’s taken off, so has her style. Sort of. Jerry Seinfeld's Kids Are All Grown Up While Posing for Family Holiday Card Happy holidays from the Seinfeld family. As many Americans travel across the country for Christmas and Hanukkah, Jerry Seinfeld and his wife Jessica Seinfeld headed to the snowy mountains for a winter getaway. When not hitting the slopes or relaxing by the fire, the Hollywood couple gathered their kids and dogs together for a family photo. What came next was one pretty special holiday card.

Waist Training: How to Layer a Corset (Photo: Adam Katz Sinding / Le 21ème) A closetful of clothing but nothing to wear? We know the feeling. Instead of reaching for your go-to jeans and blouse, consider layering disparate pieces in your wardrobe—like a button-down and corset. Irina Lakicevic expertly paired a strapless wool bustier over a simple button-down to stay warm during New York’s Polar Vortex, and elsewhere, we saw girls getting creative with strappy black bra tops and harnesses. For five new layering tips, check out the images below. 7 Iconic Outsider Prom Looks By Leeann Duggan Even for the most socially astute, the prom is a minefield of awkwardness, crummy buffet food, and slow-dance handsiness from the dude who swore you were going as friends. For those of us who’ve never posted up in the A-group, add a whole other layer of anxiety: the mortal terror of voluntarily attending a party with all the kids who make your life hell like it’s their job. Related: Remember When Your J.Crew Catalog Looked Like This? Here, we pay tribute to our favorite cinematic outsiders who sucked it up, DIYed a dress (or rented a tux), and showed up to sway to “Forever Young.”

Trend Report: How the Polo Shirt Is Making a Huge Comeback by Nicole Kliest Retire your worn-out T-shirt and follow suit with the fashion crowd’s latest go-to top: the polo shirt. Shown on prominent S/S 15 runways like Chanel, Balenciaga, and Proenza Schouler, this preppy staple has undergone a noticeable makeover. Not sure how to make it look cool? Jennifer Lawrence is the New Face of Dior Beauty Photo Courtesy of Dior Jennifer Lawrence is already one of Dior’s best brand ambassadors. She’s been serving in the role since 2012 and her responsibilities have included appearing in their handbag campaign and strictly wearing the iconic French label on the red carpet. But now, the Hunger Games actress is adding the brand’s cosmetics collection to her already won-Dior-ful resumé. In the first official photos from the campaign, Lawrence’s hair is pulled back — which showcases her porcelain skin, and bold brows — and she has on subtle brown eye shadow, and a light pink lips (one of the 44 new shades in Dior’s new lipstick collection, which is set to relaunch on September 1).

Serena Williams Is Engaged to Reddit Co-Founder Alexis Ohanian Serena Williams is engaged! A rep for the tennis star confirms to E! News that she and her boyfriend, Reddit co-founder Alexis Ohanian, are ready to say "I do!" Williams first shared the news via her verified Reddit account (because, duh), posting a sweet poem beside a cartoon sketch of Ohanian getting down on one knee. "I came home/ A little late/ Someone had a bag packed for me/ And a carriage awaited," she wrote. Jennifer Lopez Memorialized Selena in Atelier Versace In 1997, Jennifer Lopez memorialized Selena Quintanilla-Pérez on the silver screen. At 28, she captured the “Amor Prohibido” artist’s vivaciousness in the biopic Selena, and on Thursday night, nearly 20 years later, the 45-year-old looked as if not a day had passed. At the 2015 Billboard Latin Music Awards, the American Idol judge paid tribute to the murdered Tejano by performing some of the singer’s greatest hits.

How To Make Colorful Hair Your Best Statement Accessory By Alison Syrett (Photographs by Michael Dumler) Fashion and beauty may occupy different sections of department stores, magazines and websites, but the two are not so separate—especially when coming together on a person. Zac Posen's New Collection For David's Bridal Brings the Drama Photography by Shawn Brackbill for Yahoo Style With designs ranging from Hollywood glamour to 21st century technology, Zac Posen’s new collection for David’s Bridal of wedding gowns and social occasion dresses—great for bridesmaids by the way—continues to offer up couture looks at affordable prices. (The most expensive dress is $1,850 and it comes with feathers.) In addition to classic white, Posen went for dark romance with a group of black gowns for “the edgier bride.”

How to Wear Head-to-Toe White Like Beyonce, Kim & Gigi So many things can go wrong when you wear all white: red wine, coffee, the general dirtiness of life. (If you haven’t already read about how everything is coated in poop, now might not be the best time.) But who cares when it looks this good? Slouchy, fitted, casual, fancy—women like Beyonce, Lily Aldridge, and of course Kim Kardashian prove that a little white dress isn’t the only way to wear spring’s hottest color. Though it might be the easiest, you’ll look infinitely more interesting after layering shades of bright white with nudes, ivory, and pale pink in a variety of textures. You probably have a favorite pair of white jeans, and there’s no shortage of white dresses out there.

Here's Why Girl Meets World's Rowan Blanchard Was Never Your Traditional Disney Star Frazer Harrison/Getty Images If there's one Disney Channel star ready to take on the world, it may just be Rowan Blanchard. For three seasons, the actress was the heart and soul of Girl Meets World thanks to her friendship with Maya Hart (Sabrina Carpenter) and family bond with Cory and Topanga Mathews (Ben Savage and Danielle Fishel). But after E! News confirmed the show's cancellation Wednesday evening, many were left with a wide range of emotions. "I have tried to go in and write this many times in preparation for this moment that I feared might come," the actress shared in an Instagram post.

Katy Perry’s Latest Outfit Is Causing Controversy Overseas Photo: Getty Images Katy Perry’s no stranger to causing controversy with her clothes—or lack thereof—but this time, it’s not just her attire but what she wore on top that’s creating a commotion. While performing in the Taiwanese capital of Taipei on Tuesday, the pastel-tressed Perry briefly wore the national flag of the Republic of China—Taiwan’s flag—around her neck like a cape.