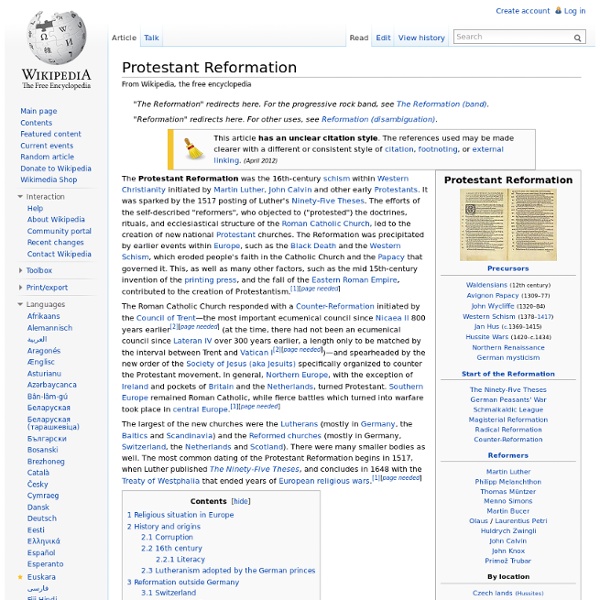 Although the core motivation behind these changes was theological, many other factors played a part, including the rise of nationalism, the Western Schism which eroded people's faith in the Papacy, the corruption of the Curia, and the new learning of the Renaissance which questioned much traditional thought. On a technological level the invention of the printing press proved extremely significant in that it provided the means for the rapid dissemination of new ideas. The Roman Catholic Church responded with a Counter-Reformation initiated by the Council of Trent and spearheaded by the new order of the Society of Jesus (Jesuits) specifically organized to counter the Protestant movement. In general, Northern Europe, with the exception of most of Ireland, turned Protestant. Religious situation in Europe[edit] History and origins[edit] Earlier schisms[edit] 16th century[edit] Parallel to events in Germany, a movement began in Switzerland under the leadership of Ulrich Zwingli. Literacy[edit] Related:  Scipione Borghese

Bernini’s Statues in the Villa Borghese « Ben Drum’s Rome Summer Blog The Borghese were one of the most influential families in early 17th century Rome. Originating in Siena, where the Borghese gained power through appointments to communes, the family moved to Rome under the guidance of Marcantonio in 1541. The family rose to power in 1605, when Marcantonio’s son Camillo Borghese was picked as the compromise candidate between two front-runner cardinals in a surprising papal election. Camillo, taking the name Pope Paul V, used the papacy as a throne of power, exercising nepotism by giving several of his family members prominent positions. Original Layout of the Borghese Gallery By initially putting the viewer at a non-dominant viewing angle, the movement of the sculpture can dictate the movement of the viewer, who would be forced to walk around the statue as it gradually unfolded. Aeneas, Anchises, and Ascanius (1618-9) Bernini’s first commission was the sculpture of Aeneas, Anchises and Ascanius or The Flight from Troy. Pluto Abducting Persephone (1621-2)

Calvinism Calvinism (also called the Reformed tradition or the Reformed faith) is a major branch of Protestantism that follows the theological tradition and forms of Christian practice of John Calvin and other Reformation-era theologians. Calvinists broke with the Roman Catholic Church but differed with Lutherans on the real presence of Christ in the Lord's Supper, theories of worship, and the use of God's law for believers, among other things.[1][2] Calvinism can be a misleading term because the religious tradition it denotes is and has always been diverse, with a wide range of influences rather than a single founder. While the Reformed theological tradition addresses all of the traditional topics of Christian theology, the word Calvinism is sometimes used to refer to particular Calvinist views on soteriology and predestination, which are summarized in part by the five points of Calvinism. History[edit] Spread[edit] Theology[edit] Scripture[edit] Law and Gospel[edit] Covenant theology[edit]

Renaissance The Renaissance (UK /rɨˈneɪsəns/, US /ˈrɛnɨsɑːns/, French pronunciation: ​[ʁənɛsɑ̃s], from French: Renaissance "re-birth", Italian: Rinascimento, from rinascere "to be reborn")[1] was a cultural movement that spanned the period roughly from the 14th to the 17th century, beginning in Italy in the Late Middle Ages and later spreading to the rest of Europe. Though availability of paper and the invention of metal movable type sped the dissemination of ideas from the later 15th century, the changes of the Renaissance were not uniformly experienced across Europe. In politics, the Renaissance contributed the development of the conventions of diplomacy, and in science an increased reliance on observation. The word Renaissance, whose literal translation from French into English is "Rebirth", appears in English writing from the 1830s.[15] The word occurs in Jules Michelet's 1855 work, Histoire de France. Overview Origins During the Renaissance, money and art went hand in hand. Black Death/Plague

Protestant Reformers Fictitious dispute between leading Protestant reformers (sitting at the left side of the table: Luther, Zwingli, Calvin, Melanchthon, Bugenhagen, and Oecolampadius) and representatives of the Catholic Church, surrounded by important Protestant reformers Protestant Reformers were those theologians, churchmen, and statesmen whose careers, works, and actions brought about the Protestant Reformation of the sixteenth century. Historically speaking, "Protestant" was the name given to those theologians, magnates, and delegations present at the Holy Roman Imperial Diet of Speyer in 1529 who protested the revocation of the suspension, granted at a prior Diet of Speyer in 1526, of Edict of Worms of 1521, which had outlawed Martin Luther and his followers. The meaning of the label "Protestant" widened over time to embrace all Western[clarification needed] Christians as distinguished from the Roman Catholic Church, except for the Anabaptists and other Radical Reformers. Precursors[edit]

THE REFORMATION AND COUNTER-REFO by James Jackson Background At the beginning of the sixteenth century, the Catholic church, modeled upon the bureaucratic structure of the Holy Roman Empire, had become extremely powerful, but internally corrupt. From early in the twelfth century onward there were calls for reform. In the first half of the sixteenth century western Europe experienced a wide range of social, artistic, and geo-political changes as the result of a conflict within the Catholic church. In the Roman church a series of powerful popes including Leo X and Paul III responded to reform demands in various ways. The Reformation and Art Protestant reformers rejected the use of visual arts in the church. Martin Luther Martin Luther (1483-1546) while studying law at the University of Erfurt in Germany experiences a spiritual conversion. In 1517 a jubilee indulgence was being preached near Wittenberg to generate funds for the building of Saint Peter's in Rome. Luther was summoned to an imperial Diet in Augsburg in 1518.

arts >> Borghese, Scipione Caffarelli Scipione Caffarelli Borghese, a seventeenth-century Cardinal of the Roman Catholic Church, was a bold and influential patron and collector of the visual arts. As is the case with many other famous Europeans of the early modern period, we are dependent primarily upon derogatory sources for documentation of his homosexuality. However, Borghese's art collection also provides clues about his personal life. <a href="/glossary.php? <a href="/glossary.php? and the fusion of genders. As a patron and collector, Borghese revealed wide-ranging tastes, but he consistently demonstrated a willingness to challenge conventional standards, as he may have done as well in his personal life. Life and Career He was born sometime between 1576 and 1579 in Rome to Marcantonio Caffarelli, a distinguished but impoverished aristocrat, and Ortensia Borghese, the sister of Camillo Borghese, who assumed the name Paul V upon being elected pope on May 16, 1605. Rumors of Homosexuality Art Collector

Christian anarchism More than any other Bible source, the Sermon on the Mount is used as the basis for Christian anarchism.[4] Most Christian anarchists are pacifists and reject the use of violence, such as war.[2] Leo Tolstoy's The Kingdom of God Is Within You is often regarded as a key text for modern Christian anarchism.[2][5] Origins[edit] Old Testament[edit] Jacques Ellul recounts that at the end of the Book of Judges (Judges 21:25) there was no king in Israel and "everyone did as they saw fit".[6][7][8] Later in the first Book of Samuel (1 Samuel 8) the people of Israel wanted a king to be like other nations.[7][9] God declared that the people had rejected him as their king. He warned that a human king would lead to militarism, conscription and taxation, and that their pleas for mercy from the king's demands would go unanswered. New Testament[edit] The gospels tell of Jesus' temptation in the desert. Early Church[edit] Conversion of the Roman Empire[edit] Middle Ages[edit] Modern era[edit] Adin Ballou

Great Apostasy Antichristus, a woodcut by Lucas Cranach of the pope using the temporal power to grant authority to a generously contributing ruler The Great Apostasy is a term used by some religious groups to describe a perceived fallen state of traditional Christianity, especially the Roman Catholic Church, because they claim it allowed the traditional Greco-Roman mysteries and deities of solar monism such as Mithras and Sol Invictus and idol worship into the church. In short, in their opinion, the church has fallen into apostasy.[1][2] They feel that to attract the pagans to nominal Christianity, the Catholic Church took measures to amalgamate the Christian and pagan festivals [3] so pagans would join the church; for example, bringing in the pagan festival of Easter as a substitute for the Pasch or Passover, although neither Jesus nor his Apostles enjoined the keeping of this or any other festival.[4][5] Overview[edit] Some modern scholars[who?] Protestant views[edit] Reformed perspective[edit]

The Counter-Reformation The subject will be considered under the following heads: I. Significance of the term II. Low ebb of Catholic fortunes III. St. Significance of the term The term Counter-Reformation denotes the period of Catholic revival from the pontificate of Pope Pius IV in 1560 to the close of the Thirty Years' War, 1648. Another point to be noticed is that, though we assign certain dates for the beginning and end of the period under consideration, there has never been any break in the striving of the Church against the heresies which arose in the sixteenth century. The span of time during which this enthusiasm lasted may be justly considered as an historical period, and it is that which we call the period of the Counter-Reformation. Low ebb of Catholic fortunes "From the time of St. In many countries, obedience to the pope has almost ceased, and matters are becoming so critical that, if God does not interfere, they will soon be desperate . . . Germany Poland "Poland is in almost as hopeless a state."