She Was Given LSD, Psilocybin, & MDMA In The Final Days Before Her Death – What Happened After Was Beautiful 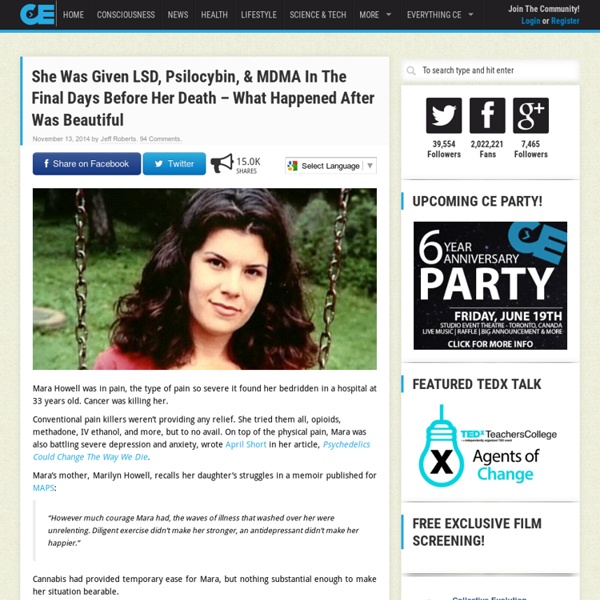 Mara Howell was in pain, the type of pain so severe it found her bedridden in a hospital at 33 years old. Cancer was killing her. Conventional pain killers weren’t providing any relief. She tried them all, opioids, methadone, IV ethanol, and more, but to no avail. On top of the physical pain, Mara was also battling severe depression and anxiety, wrote April Short in her article, Psychedelics Could Change The Way We Die. Mara’s mother, Marilyn Howell, recalls her daughter’s struggles in a memoir published for MAPS: “However much courage Mara had, the waves of illness that washed over her were unrelenting. Cannabis had provided temporary ease for Mara, but nothing substantial enough to make her situation bearable. Being a mind-body educator, Mara’s mother suspected that her daughter’s pain was perhaps connected to something less tangible than what Western medicine was willing to accept. Psychedelics helped Mara find peace in the final days before her death. Source: Alternet Great news!

Psychedelics Could Change the Way We Die When 33-year-old Mara Howell was dying of cancer, the pain she experienced was so severe that even the highest doses of opioids, methadone, IV ethanol and even an intrathecal pump weren’t working. She was bedridden, and depression and anxiety crashed down on top of the pain. As Mara’s mother Marilyn Howell recalls in her memoir Honor Thy Daughter, published by the nonprofit Multidisciplinary Association for Psychedelic Studies (MAPS): “However much courage Mara had, the waves of illness that washed over her were unrelenting.

My Flight From the Modern Medical Establishment Dylan Charles, EditorWaking Times Learning to find your own way in this backward world is no easy task. Our indoctrination into this culture and society is different for everyone, of course, but a common principle instilled in us is that certain members of our community are to be revered as credible by virtue of their professional status, age, wealth, or association with certain institutions, government agencies, etc.

This Artist Photographs People On Drugs To Show How It Affects Them Les Baker V is a talented photographer who embarked on an interesting project: to take a portrait of people on a variety of drugs, then overlay an image that symbolizes the substances they used in some meaningful way. Of course, drugs are all dangerous at some level so we do not encourage trying to replicate something like this yourself. For more information, visit Baker’s website. Adderall Cocaine Crack The Breathing Trick That Puts You to Sleep in Seconds Nothing is worse than lying awake at night, willing your brain to shut down so you can rest. Warm milk, lavender oil, and counting sheep — we’ve all tried them. But the new solution could be simply learning to breathe. Related: That Lemon Wedge’s Dirty Little Secret What is it? The 4-7-8 breathing technique was pioneered Dr.

This Revolutionary Way Of Using Psychedelics Can Enhance Mental Function & Physical Ability GARD Pro Not Registered Micro-dosing is taking sub-perceptual (6-25 microgram LSD, 0.2-0.5 gram dried mushrooms, 50-75 microgram mescaline HCL) while keeping up with ones daily activities, engaging in extreme sports, appreciating nature or enhancing one’s spiritual practice. This manner of integrating psychedelics, also known as a psycholytic dose, doesn’t inhibit ego-functioning as the ‘heroic’ Terence McKenna dose does. It can be much easier integrated into everyday functioning. Researchers Uncover Connection Between Gut Health and Mood Kristen Anderson, GuestWaking Times We have all heard the old adage “you are what you eat”, but science is discovering even more of a connection between our digestive tract and our overall health. Commonly referred to as “gut health”, the gut microbiota, which consist of trillions of microbes, may influence more than bowel regularity and metabolism. These bacterium make up a 6-pound ecosystem inside of every human and produce hormones, communicate directly with our brain via the vagus nerve, and can even produce neurochemicals which influence behavior.

Why Culture and Society Banned Psychedelic Plants – Terence McKenna Each individual has the power to become great, to become special by understanding the core of his or her existence. However, society and culture have taken some of that power away through actions such as prohibition of the use of psychedelic plants. ”What it’s all about is you, you are the center of the mandala” “You have to take seriously the notion that understanding the universe is your responsibility, because the only understanding of the universe that will be useful to you is your own understanding.”

Why We’re All Deficient In Magnesium, The Many Signs & What To Do Magnesium is life. It is the 4th most abundant mineral in the body, right next to sulfur (which is JUST as important). Along with being a mineral, magnesium is also an electrolyte. Releasing Unexpressed Emotion Randi G. Fine, ContributorWaking Times “Unexpressed emotion will never die. They are buried alive and will come forth later in uglier ways.” ~Sigmund Freud Most of the feelings that interfere with our lives today, our negative emotional responses, have little to do with what is occurring in the present.

The Attraction for Drugs is Spiritual – Osho Drugs are as old as humanity itself, and they certainly fulfill something of immense value. I am against drugs, but my being against drugs is for the same reason as for thousands of years people have been addicted to the drugs. It may look very strange. The drugs are capable to give you a hallucinatory experience beyond the mundane world.

Coping With Anxiety Tip: Change What You Can, Accept the Rest (continued) The Anxiety Toll continued... Anxiety may also feel like depression. "The two sometimes overlap," Ross says. When anxiety becomes so overwhelming that it interferes with day-to-day activities -- when it keeps you from going places, from doing things you need to do -- that's when you need help, says Ross. Psychobiotics: Bacteria For Your Brain? Dr. Kelly Brogan, M.D., Green Med InfoWaking Times Every functional medicine psychiatrist has case stories of the ‘probiotic cure’ – of a patient with debilitating symptoms, often obsessive compulsive range, whose symptoms remitted completely with dietary change and probiotic supplementation. Is this voodoo or is it based on a growing understanding of the role of the microbiome in mental health and behavior? For two decades now, pioneering researchers have been substantiating inflammatory models of mental illnesses such as depression, bipolar disorder, and schizophrenia.