Waist Training: How to Layer a Corset 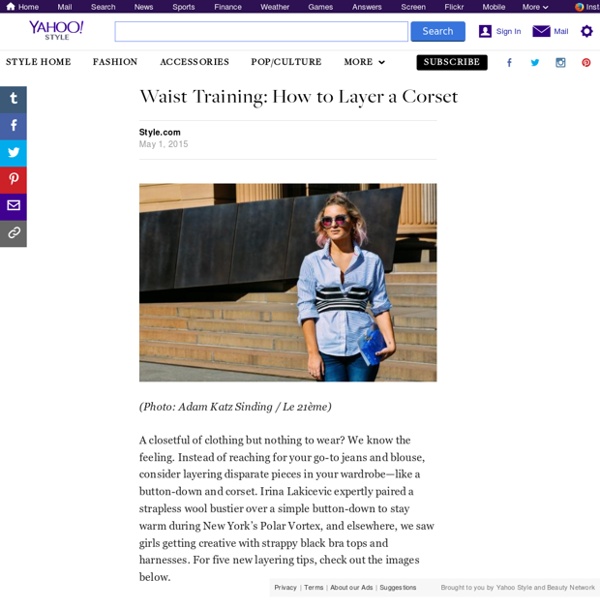 (Photo: Adam Katz Sinding / Le 21ème) A closetful of clothing but nothing to wear? We know the feeling. Instead of reaching for your go-to jeans and blouse, consider layering disparate pieces in your wardrobe—like a button-down and corset. Irina Lakicevic expertly paired a strapless wool bustier over a simple button-down to stay warm during New York’s Polar Vortex, and elsewhere, we saw girls getting creative with strappy black bra tops and harnesses. For five new layering tips, check out the images below. (Photo: Yannis Vlamos / Indigitalimages.com) (Photo: Kim Weston Arnold / Indigitalimages.com) (Photo: Gianni Pucci / Indigitalimages.com)

Here's Why Girl Meets World's Rowan Blanchard Was Never Your Traditional Disney Star Frazer Harrison/Getty Images If there's one Disney Channel star ready to take on the world, it may just be Rowan Blanchard. For three seasons, the actress was the heart and soul of Girl Meets World thanks to her friendship with Maya Hart (Sabrina Carpenter) and family bond with Cory and Topanga Mathews (Ben Savage and Danielle Fishel). But after E!

7 Ways to Wear a Light Flight Jacket Photo: Alex’s Closet It’s finally about that time of year when you can just throw on a light jacket and walk out the door. With the sporty outerwear trend at its peak, this week, we saw bloggers around the world wearing flight jackets in all kinds of colors and fabrics. In Paris, Alice and Alex went for alternatives to the style’s typical army-green with bright, silky yellow and lavender versions, while in Nashville, Mary wore one in powdery-blue quilt. See below for more ways to pair a sporty bomber with any outfit this spring. Related: Nicole Richie Says to “Stick To Your Own Closet” Nicole Richie in Calvin Klein Collection at the FIT Future of Fashion runway show. Photo: Getty Images Celebrity fashion lines often crash and burn… but not Nicole Richie’s. Her accessories label, House of Harlow 1960, has been a commercial success since 2008, propelling the 33-year-old into the same fashion space as Victoria Beckham and the Olsens—and making her a business whiz, too. So when Richie admitted she was “excited, very honored, and a little nervous” to host FIT’s Future of Fashion runway show, you got the sense that it wasn’t because of stage fright—it was because she genuinely wants to support the style community. Spoiler alert: Richie’s keynote speech onstage went smoothly…and so did her Yahoo Style interview backstage, where she discussed her family, her philosophy on borrowing clothes, and the reason she has Alexander Wang on speed dial.

Jennifer Lopez Memorialized Selena in Atelier Versace In 1997, Jennifer Lopez memorialized Selena Quintanilla-Pérez on the silver screen. At 28, she captured the “Amor Prohibido” artist’s vivaciousness in the biopic Selena, and on Thursday night, nearly 20 years later, the 45-year-old looked as if not a day had passed. At the 2015 Billboard Latin Music Awards, the American Idol judge paid tribute to the murdered Tejano by performing some of the singer’s greatest hits. Wearing an Atelier Versace ensemble, she sang "Como La Flor,”“Bidi Bidi Bom Bom,” “Amor Prohibido,” “I Could Fall In Love,” and “No Me Queda Mas.” Lopez began the medley with a large ruffle train around her waist attached to blush pants with sequin stripes down the side.

Why New Mom Janet Jackson Needs Her Privacy More Than Most Janet Jackson was born to be famous. She might not have known it for a few years, but when she entered this world in 1966, she was joining a legendary musical dynasty in progress. The Jackson 5—featuring brothers Jackie, Tito, Jermaine, Marlon and then 6-year-old Michael Jackson, had already formed as The Jackson Brothers in 1964, and buoyed by their success, at 10 years of age Janet was entertaining America with her siblings on their TV variety show The Jacksons. But while the brothers would ultimately come in a distant second-through-fifth to the supremely talented Michael, and she was the youngest of nine children overall, it soon became clear that Janet Jackson was going to be a force to be reckoned with on her own. Janet also kicked off the acting portion of her career on the classic 1970s-era series Good Times and appeared on Different Strokes and Fame in the 1980s. And the rest is history.

Katy Perry’s Latest Outfit Is Causing Controversy Overseas Photo: Getty Images Katy Perry’s no stranger to causing controversy with her clothes—or lack thereof—but this time, it’s not just her attire but what she wore on top that’s creating a commotion. While performing in the Taiwanese capital of Taipei on Tuesday, the pastel-tressed Perry briefly wore the national flag of the Republic of China—Taiwan’s flag—around her neck like a cape. She also had on a gown decorated with sunflowers. It might seem like nothing new for Perry, but the issues stem from the fact that, in Taiwan, both of those images are generally considered to be in support, politically, of the island state’s independence from China.

Target Coupons Online For 20% Entire Order Top Stores 1-800-PetMeds 4inkjets Amazon Auto Parts Warehouse CheapOair Pacsun PetSmart Puritans Pride Target Wal-Mart.com Target printable coupons: These coupons are used at target in-stores and get extra savings around 10% to 30% and even you can get some of the products free of cost. But you need to take a print out and you can find them here.target printable coupons are really usefull who are purchasing target in-stores. Target coupon codes: Here you can find target coupon codes on individual products and its dollar off so these coupon codes saves you dollars but some times here you can find 10% to 20% extra saving on entire target site or group of products or a category or a brand. Use target coupon codes at checkout to get reflect right discount.

Five Top Stylists on the Future of Fashion Even a cursory look at the Fall runways makes it clear that the industry’s top stylists are earning their keep, perhaps more than ever before. Here was a season that wore its eccentricities on its sleeve—and everywhere else. And while that unapologetic, Little Edie-esque sprezzatura spotted on runways from Gucci to Maison Margiela will surely be the province of fashion fans and street-style regulars alike by the time this story goes live, it took some of the industry’s most visionary eyes to champion it in the face of fashion-nun minimalism or, what’s arguably “worse,” normcore’s reign of tennis shoes and polo shirts. “I don’t really know what normcore’s aesthetic stands for,” offers Benjamin Bruno. “Being boring but pretending it’s conceptual?

How to Go Monochromatic Like Rihanna, Blake Lively & More On Tuesday, Avengers: Age of Ultron star Elizabeth Olsen was spotted leaving her New York City hotel in a chic orange monochrome ensemble. The actress paired her orange suede coat from The Row (it’s good to have sisters who are designers!) with simple a silk shirt and cropped fitted trousers. 11 Ways to Make a Denim Skirt Actually Look Cool Skip directly to primary article Skip directly to list of articles Style HomeFashionAccessoriesMet GalaPop/CultureWeddingsMenExclusiveA to ZeeVideoBeauty More  Subscribe View on Instagram Follow Lauren Conrad Debuts the ''Cutest Baby Bump Ever'' Lauren Conrad is bumpin'! The fashion mogul's team took to her LaurenConrad.com blog to reveal her growing baby bump for the very first time. "Oh hello, cutest baby bump ever," they wrote beside a photo of the soon-to-be mama standing on a balcony in a striped dress that hugged her tiny bump with a beige sweater over. "We can't wait to meet your little bundle, Lauren! XO Team LC." Conrad announced that she and hubby William Tell are expecting their first child together on New Year's Day.

Kendall Jenner Wore a Confederate Flag Muscle Tee Photo: AKM-GSI Kendall Jenner has made some regrettable fashion choices in the past. She describes the outfit at the top of that list as “green denim pants, [a] full neon green” ensemble.