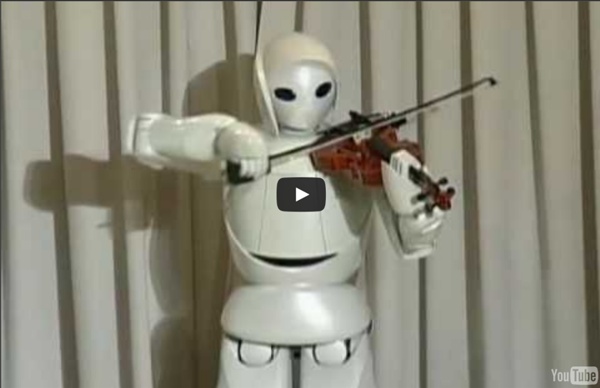 Humanoid Robot Justin Learning To Fix Satellites Justin is a dexterous humanoid robot that can make coffee. Now it's learning to fix satellites. Justin was developed at the Institute of Robotics and Mechatronics, part of the German Aerospace Center (DLR), in Wessling, Germany. The robot has different configurations, including one with wheels. The space version has a head, torso, and arms, but no wheels or legs, because it will be mounted on a spacecraft or satellite. The goal is to use Justin to repair or refuel satellites that need to be serviced. But that's a long-term goal. Justin's head has two cameras, used for stereoscopic vision, which means the operator can get a sense of depth when manipulating the arms. Watch the video to see a reporter operating the robot, which, he quips, probably "costs much more than what I can earn my entire life."

Robot Actress More news about Geminoid F, the ultrarealistic android unveiled early this year: the robot got a job. Geminoid F is working as an actress, taking the stage in a play that opened yesterday in a Tokyo theater. In the 20-minute play, titled "Sayonara" ("good bye" in Japanese), the android shares the stage with another actress (of the human kind) named Bryerly Long. Long plays the role of a young woman who is suffering from a fatal illness and whose parents bring her an android to serve as a companion. A human operator controls the robot from a soundproof chamber behind the stage. The robot is in a permanent sitting posture, so movements are limited to the head, torso, and arms. Geminoid F is a creation of Hiroshi Ishiguro, a professor at Osaka University and researcher at ATR Intelligent Robotics and Communication Laboratories. The "Android-Human Theater" project is a collaboration between Ishiguro and Japanese director Oriza Hirata, who writes and directs. Would you go watch the play?

Humanoid Robot Dance Japanese roboticists recently showed off a female android singing and dancing along with a troupe of human performers. Video of the entertaining and surprisingly realistic demonstration received went viral on the Net. How did they do it? To find out, I spoke to Dr. Kazuhito Yokoi, leader of the Humanoid Research Group at Japan’s National Institute of Advanced Industrial Science and Technology, known as AIST. The secret behind the dance routine, Dr. The hardware, of course, plays a key role. But now the biggest innovation is a new software to program the movements of the robot. So by editing a relatively small number of key poses you can compose complex whole-body motion trajectories. The software developed at AIST to create sequences of movements. The software verifies that the robot can indeed perform the transitions from one pose to the next. The software also monitors the robot’s stability. Here's a video showing how the software works: Dr. Here’s my full interview with Dr. KY: No.

NASA Ready to Send Humanoid Robot to Space In one giant leap for robotkind, NASA will send the world’s first humanoid robot to space later this year. The humanoid, called Robonaut 2 or R2, is set to launch on space shuttle Discovery on 1 November, 2010, and travel to the International Space Station, where it will become a permanent resident and work alongside humans as a robotic helper. The Robonaut features dexterous arms and hands that can manipulate objects and tools just like humans do. The main goal is to find out how manipulation robots behave in space -- and also give crew members a second pair of hands. "It’s the first time ever in the history of the planet that we’ve decided to launch a humanoid robot into space," says Nic Radford, the Robonaut deputy project manager. The robot can perform tasks autonomously or under remote control, or a mix of both. Most of the time the robot will receive instructions designating a task and carry it through autonomously. And why a human-shaped robot? Here's an overview of the project:

Hobby Robot Rides a Bike the Old-Fashioned Way The current generation of bicycle-riding robots (I'm talking about those crazy kids from Murata) are extremely complicated, relying on giant gyroscopes and thick wheels to keep themselves upright even while stationary. This is certainly a neat trick, but it's not something that most humans can pull off. It's not a problem that robots are better at something than we are (by now, we're used to it), but there's something to be said for human emulation, too. It turns out that getting a robot to ride a bicycle doesn't need to involve much more than a hobby level humanoid employing a relatively simple gyroscope that sends steering commands to keep things generally upright. This KHR3HV bipedal robot (which can be yours for about $2200) has a nifty custom bike that it got from I know not where, and can zip around under remote control at up to 10 kph, even making its own starts and stops: Wheee! [ AI and Robot ] via [ RoboSavvy ]