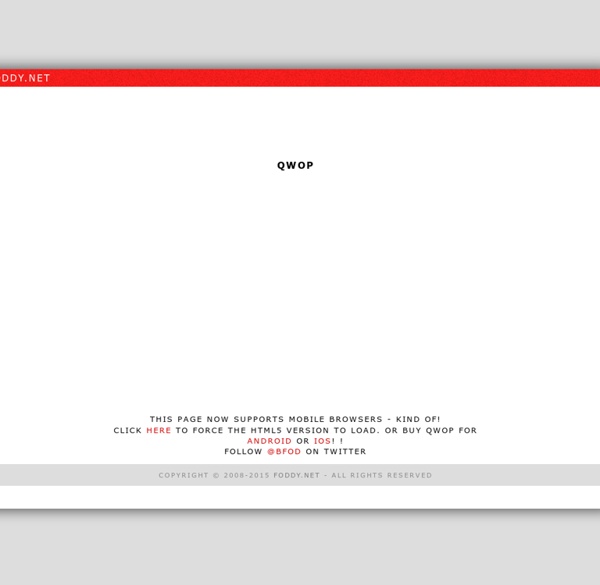 How the F.B.I. Made 'Winners Don't Use Drugs' the Arcade Motto of the '90s Walk into your local retro arcade and you’ll see it. Cycling through the teaser screens on Teenage Mutant Ninja Turtles, Gunblade, Rambo III, and more is a pixelated image of a blue or sometimes grey background glowing for that moment before you drop in a quarter. In the center is the gold-flecked seal of the Federal Bureau of Investigation. Similarly gold letters on the bottom read: “Winners Don’t Use Drugs.” When the slogan was first introduced in the late ‘80s, kids saw it as a harmless scold among a sea of War on Drugs messaging aimed at them.

The 150 Best Online Flash Games It was a long and exhausting task: playing hundreds of online games for hours in a row, day after day. It was hard, but someone had to do it. The result is the list that you will find below. Enjoy! Energy Seed by Sungwoo Park & Sunhee Kim Trashing Batteries for Brighter Sidewalks We all know alkaline batteries are really bad for the environment if you don’t dispose of them properly. The right thing to do is send them to special recycling centers but hundreds of tons end up in landfills where their toxic innards seep into the earth. Perhaps a good solution is the Energy Seed, an LED lamp post powered by trashed alkaline batteries. The idea is to encourage people to throw their batteries away into the Energy Seed. There’s a slot for nearly every size battery.

Games at Miniclip Games at Miniclip Welcome to Miniclip.com, the leading online games site, where you can play a huge range of free online games including action games, sports games, puzzle games, mobile games, iPhone games, Android games and many more. Player Games and Achievements On Miniclip you can play games to compile games statistics such as high scores, and rankings on your own player page and can receive awards for playing games. You can also create your own Miniclip avatar with clothing and accessories to represent you in our fun Miniclip games. You can play single player games or play advanced massive multiplayer games with other players from around the world.

Everyone Should Play Slam City Oracles Never have I seen a game that is more specific to the Autostraddle community — maybe Gone Home. Maybe. But this game was basically made for us all. Crickler Crickler Instructions: Begin with an easy clue (as you would in a crossword puzzle). To enter the answer, select a square with your mouse and start typing: 1. Pale pink highlights the clue you are working on: 2. 10,000 Year Clock We are building a 10,000 Year Clock. It's a special Clock, designed to be a symbol, an icon for long-term thinking. It's of monumental scale inside a mountain in West Texas. Tom McLean - It Is Your Responsibility — Play You're in a sleep so deep it's like you don't exist. It's the sleep of infants before they're conceived, dreamless and undisturbable. "Rest" would imply some energy that you've spent previously, but you don't remember anything that could be called "previous"... But now it's different. There are thoughts passing through your head, where previously there was nothing.

Gayme Corner: "Videogames for Humans" and the Intimate, Playful Engagement of Twine Welcome to the fourth installment of Gayme Corner, a biweekly column in which I talk about games, all types of games, and the ways we play them. This week, I dove into Videogames for Humans, a lovely series of essays about Twine games edited by game creator and writer Merritt Kopas. I’ve talked a bit about Twine in this column, and Twine games have been mentioned on Autostraddle dot com, but we haven’t really talked about Twine. Here’s what I know about Twine: it’s a visual tool for writing interactive fiction and games. Passages go in boxes, boxes can be dragged around the screen, and links are drawn between them, offering options to go forward and sometimes backward and sometimes cycle through choices. Everything else is customizable.

PCE.js IBM PC/DOS in the Browser PCE.js IBM PC/XT emulator running PCDOS 5 — a hack by James Friend PCE.js runs classic computers in the browser. It's a port of Hampa Hug's excellent PCE emulator, put together by James Friend. This is an emulated 286 IBM PC compatible running PC DOS 5 Stuff no one told you: Simple truths of life At some point in 2010, Alex Noriega, illustrator from Barcelana, was going through a crisis due to some isues at work. He decided to start a blog as a way of trying to find what he was doing wrong. He wanted to put on paper all that he had learned in life as simple as possible and try to see if what was happening around him made any sense.

might be the hardest flash game ever. simple running shouldn't be that difficult :D by vjproduction Nov 12