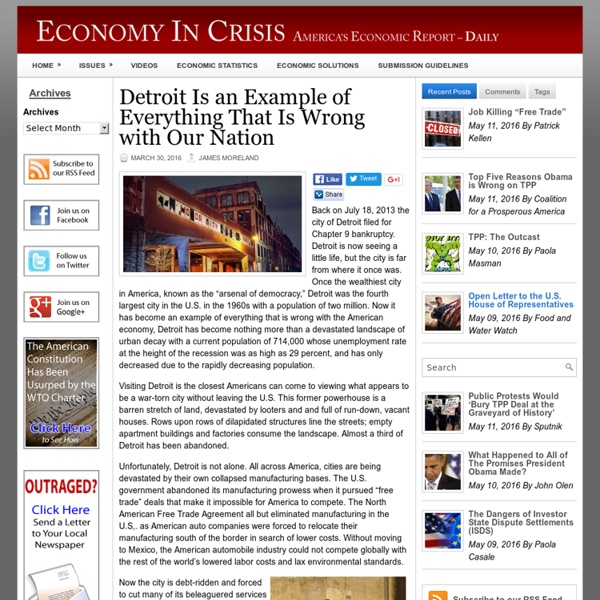 Back on July 18, 2013 the city of Detroit filed for Chapter 9 bankruptcy. Detroit is now seeing a little life, but the city is far from where it once was. Once the wealthiest city in America, known as the “arsenal of democracy,” Detroit was the fourth largest city in the U.S. in the 1960s with a population of two million. Now it has become an example of everything that is wrong with the American economy, Detroit has become nothing more than a devastated landscape of urban decay with a current population of 714,000 whose unemployment rate at the height of the recession was as high as 29 percent, and has only decreased due to the rapidly decreasing population. Visiting Detroit is the closest Americans can come to viewing what appears to be a war-torn city without leaving the U.S. This former powerhouse is a barren stretch of land, devastated by looters and and full of run-down, vacant houses. Unfortunately, Detroit is not alone.

Vanishing City: The Story Behind Detroit’s Shocking Population Decline The news this week that Detroit’s population plunged more than 25% to just 714,000 in the last decade shouldn’t be surprising. The city’s collapse is as well-documented as it is astonishing – the population peaked at nearly 2 million in the 1950s, driven in part by a post-World War II auto industry boom now long gone. (More on TIME.com: See tilt-shift photography of Detroit) Predictably, Detroit officials have vowed to challenge the Census Bureau’s report. “I don’t believe the number is accurate,” the mayor, Dave Bing, said in a hastily scheduled news conference Tuesday. Bing’s response is understandable.

Autos troubles, race at root of Detroit collapse Blue-collar workers poured into the cavernous auto plants of Detroit for generations, confident that a sturdy back and strong work ethic would bring them a house, a car and economic security. It was a place where the American dream came true. It came true in cities across the industrial heartland, from Chicago's meatpacking plants to the fire-belching steel mills of Cleveland and Pittsburgh. It came true for decades, as manufacturing brought prosperity to big cities in states around the Great Lakes and those who called them home. Detroit was the affluent capital, a city with its own emblematic musical sound and a storied union movement that drew Democratic presidential candidates to Cadillac Square every four years to kick off campaigns at Labor Day rallies.

As Detroit founders, its auto industry soars; rapid globalization leaves city's economy behind The name “Detroit” is still synonymous with auto manufacturing in the U.S., but the strong revival in the auto industry in the past four years, after decades of globalization, has done little to lift the beleaguered city’s economy or reputation. All three major U.S. automakers still have headquarters in the Detroit metropolitan area, where the world’s auto industry was born. But the Big Three long ago moved some of the biggest chunks of their production, jobs and plants to places as near as Ohio and Ontario and as far away as China, Brazil and Russia.

Detroit population drops again but loss is slowing American households are making more money today than they did three decades ago—in some places, a lot more. In order to find out which places have seen the greatest increase in household income, we turned to the National Historical Geographic Information System (NHGIS), which uses historical reports from the decennial Census and the American Community Survey to track median income over time. Research site MooseRoots then adjusted all the data to 2015 dollars to filter out the effects of inflation. On the whole, households in northeastern states have seen the largest income increase since 1980, with New Hampshire, Massachusetts and Vermont ranking among the top five. South Dakota and the District of Columbia round out the top list. In each case, household income has risen over 30% in just 30 years.

The Center for MichiganDetroit struggling to create jobs outside of downtown A stretch of Livernois Avenue, tabbed as the “Avenue of Fashion,” is a “critical commercial corridor” where city leaders now say job growth can once again take place. Detroit has a host of well-documented problems – poverty, crime, street lights, mass transit – that hamper its recovery. But the ability to create jobs may be its biggest hurdle. The Death And Decay Of Detroit, As Seen From The Streets With the stock market hitting record highs day after day, it is easy to move on and forget that one of American's once premier cities, Detroit, has been bankrupt for nearly a year. But out of mind doesn't mean out of sight, especially now that Google has launched its street view Time Machine, which provides for 7 years worth of street images, showing the time shift of the tumultuous period period starting in 2007. One blogger who decided to take this time lapse data and apply it to the city of Detroit is GooBing Detroit who, as the following time-lapse photos demonstrate, has captured Detoit's unprecedented slow-motion collapse into death and decay in what is the closest we have to "real time." Perhaps what is most stunning about the following series of photos is not the ultimate fate of the bankrupt city, but how quickly a once vibrant metropolis has succumbed to blight and sheer desperation. Hopefully not coming to a street near you. July 2013

Root Causes of Detroit’s Decline Should Not Go Ignored Recently Detroit, under orders from a state-appointed emergency manager, became the largest U.S. city to go bankrupt. This stirred predictable media speculation about why the city, which at 1.8 million was once America’s 5th-largest, declined in the first place. Much of the coverage simply listed Detroit’s longtime problems rather than explaining their causes. For example a Huffington Post article asserted that it was because of “racial strife,” the loss of “good-paying [sic] assembly line jobs,” and a population who fled “to pursue new dreams in the suburbs.” Detroit’s Job Creation Problems – Bronars Economics Detroit urgently needs job creation. No American city faces more difficult economic problems than Detroit. Even seemingly good economic news is misleading. Detroit’s unemployment rate fell from 27.8% in the summer of 2009 to 16.3% in the most recent jobs report.

The numbers behind Detroit's jobs crisis Detroit has made great progress toward addressing the needs of its residents in the last few years. However, one of the city’s most important challenges remains: rebuilding the city’s workforce. The crux of this challenge is that there are too few jobs in the city for its residents and too many barriers to employment. Improving economic conditions have led to a net gain of over 7,900 residents employed since January 2014.

Nine Reasons Why Detroit Failed My hometown of Detroit has been studied obsessively for years by writers and researchers of all types to gain insight into the Motor City’s decline. Indeed, it seems to have become a favorite pastime for urbanists of all stripes. How could such an economic powerhouse, a uniquely American city, so utterly collapse? Most analysis tends to focus on the economic, social and political reasons for the downfall. One of my favorite treatises on Detroit is The Origins of the Urban Crisis by Thomas Sugrue, who argues that housing and racial discrimination practices put in place after World War II played a primary role in the decline of Motown. I’d argue that it’s closest to the truth of an explanation for Detroit today, but not quite there.

A city in flames: inside Detroit's war on arson For eight long years, the firefighters of Highland Park, Michigan, worked out of a warehouse. There was no red-bricked facade, no lanky Dalmatian. No freshly washed engines gleaming in the sun. No second-floor fire pole to descend in the dead of night to wailing sirens. Whatever idealized vision you have of firefighting, Highland Park is not it. Instead, picture a hulking, boxy building on the edge of an industrial park about six miles north of downtown Detroit. Why Detroit's Collapse Was So Much Worse Than Other Hard-Hit Cities The best CityRead of this month may be the New Yorker profile of L. Brooks Patterson, kingpin of suburban Detroit (paywall). Patterson wears a number of hats — chief executive of Oakland County, sprawl lover, political loud mouth, unabashed Detroit basher — and is a controversial personality, to put it kindly.