Top 6 most cost-effective vegetables to grow 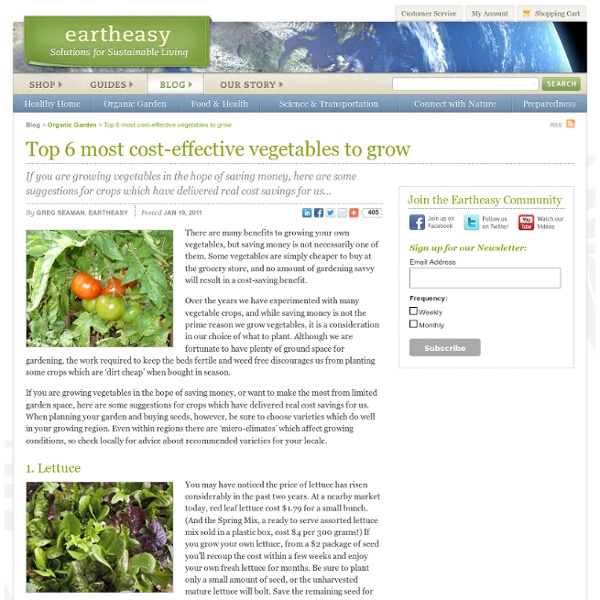 There are many benefits to growing your own vegetables, but saving money is not necessarily one of them. Some vegetables are simply cheaper to buy at the grocery store, and no amount of gardening savvy will result in a cost-saving benefit. Over the years we have experimented with many vegetable crops, and while saving money is not the prime reason we grow vegetables, it is a consideration in our choice of what to plant. If you are growing vegetables in the hope of saving money, or want to make the most from limited garden space, here are some suggestions for crops which have delivered real cost savings for us. 1. You may have noticed the price of lettuce has risen considerably in the past two years. In our garden we grow two varieties of leafy lettuce, Magenta (red leaf) and Concept (green leaf). 2. Green bell peppers cost about $1.50 each at our supermarket, and yellow and red peppers are even more expensive due to their extended ripening times. 3. 4. 5. 6.

Self-Cleaning Fish Tank + Garden Turns Waste to Fertilizer Ever forget to clean out the tank? Or water the plants, for that matter? This design kills two birds (but no fish!) with one stone, and doubles as a fun instructional tool for kids learning about how natural systems work. From the makers: “Grow fresh produce right in the comfort of your own home – beans, basil, thyme, baby greens, oregano, mint, parsley, spinach and so many other delicious foods! This closed-loop eco-system uses the fish waste to naturally fertilize the plants above. What started as a Kickstarter project (which got more than enough funding) is now in pre-order mode at Back to the Roots.

Sherana Sheep and Cattle - Our Damara flock Damara sheep are a pure natural breed, which originated from the Hamites of Eastern Asia and then moved through Egypt into Africa. It is one of the oldest sheep breeds in the world. They were discovered by early German settlers in Namibia and Angola. For many years they were confined to an isolated region of Namibia and Angola (a region once known as "Gross Damaraland"), free of the influence of other breeds. Damara sheep have short glossy hair (resistant to grass seeds) long legs, fat tail, high fertility, hardiness and good mothering and herding instincts. These traits developed under natural selection on the African continent. A Sherana Damara Ram Our original genetics came from "Hall Damara" in Western Australia, who imported them from South Africa, mainly from the flocks of Clynton Collett, the President of the South African Damara Breeders Society. Our sheep flock comprises: Over 100 pure bred ewes and rams from six ewe lines and about 20 ram lines.

How to start a vegetable garden Spring has sprung, and even if you have a black thumb, you may be feeling inspired to dig in the dirt. How about starting a vegetable garden? Though the process involves more than picking a random spot, making holes and planting seeds, taking these simple steps can help ensure a successful growing season. Plan your plot. Test the soil. Purchase the right tools. Prep the soil. Choose the right seeds. Plant your seeds. Keep it up. Have other ideas on how to start a vegetable garden? See also: MNN homepage photo: tboard/Flickr

Our Little Acre: Potatoes in a Barrel We grew potatoes one year. We'd never grown them before, but at my grandma’s urging, accompanied by her recollection of her family growing them in a "truck patch," we decided to plant them. Now this was back when we knew next to nothing about gardening, so we did it just like we were told. (That way we could blame Grandma if things didn’t work out.) We purchased a bag of seed potatoes, which don’t look much like seeds at all. We cut the potatoes into pieces with two or three eyes on each piece and let them dry out for a couple of days. This year, we’re growing them in a new way (for us). Potatoes planted in the barrels on April 3rd broke through the soil on April 17th. As the potato plants grow to about eight inches high, we’ll continue to add soil to about half the height of the stems, and the plants will keep on growing. Potatoes like cool growing weather, so plant them about two to three weeks before your last frost date. ShareThis

Potatoes What are we doing in the garden right now? A whole lot of stuff, but let's consider the humble potato. We only grow fingerling types for Manresa. They are tastier and more useful for the chef. I buy my seed potatoes from Ronniger's in Colorado. When the potatoes arrive, I cut up the larger ones (I know they tell you not to, but hear me out here). All the tubers get put in a single layer in seedling trays (open at the bottom for air flow). I like to grow potatoes in 15 gallon pots. First, we disinfect our stash of used pots with a mixture of one part bleach to 10 parts water. We then place only 4 inches of potting soil into the bottom of each pot. Once the soil is in the pots, we simply push five tubers into each one, about two inches under. The pots are then placed in our large unheated hoophouse and watered well. These gorgeous Purple Peruvians were photographed freshly pulled last spring here at the farm.

Basement Aquaponics & Raising Tilapia » FreestyleFarm This summer, twenty little Blue Nile Tilapia were hand delivered to my door. I had given up all hopes of finding a supplier in Canada, and was thrilled when I found one near my home. The fish spent their summer growing out in the greenhouse where our first aquaponic system was made. Once the cooler temperatures of September came around, we relocated them inside to a 100-gallon stock tank (giant water bowls for cows and horses). October 15: The bok choy, kale and basil are already forming secondary leaves. More green onions and celery. You can see water is continually being pumped (coming out of white tube) to fill the growbed. October 21: A week later, look how much they’ve grown. October 26: So this is when I started noticing that the leaves were not as green as they should be; instead they were a mottled yellow. Who knew that plants needed a dark rest period? October 29: New leaves are looking a little greener. November 25: A lush jungle. So what happened to our last remaining prawn?

Gardening Tips - 7 Habits of Successful Gardeners Originally published January 2009 Or is it the Seven Pillars of Horticultural Wisdom? As everyone's resolutions remind us, we love attaching a number to advice, a number smaller than the one I regard as most realistic: The Twenty Three Thousand Four Hundred and Sixty-Two Things It's Important to Remember Before Getting Out of Bed. So be warned: I haven't really honed it down to only seven; these are just the first seven essentials that came to mind when I decided to do this. And not in order, either. Make CompostUse CompostPlant Crops in Wide BedsMulchFeed the Soil, Not the PlantsShare SomethingBe There Photo: The compost bins at Stonecrop Gardens in Cold Spring, N.Y. 1. Short version: Mother Nature never throws anything away. Longer version: Composting is the rare silk purse from sow's ear, something for nothing, win-win. It's easy to fall into thinking that compost's last name is bin, and that careful layering and turning are part of the deal. 2. 3. 4. 5. 6. Got seeds? 7.