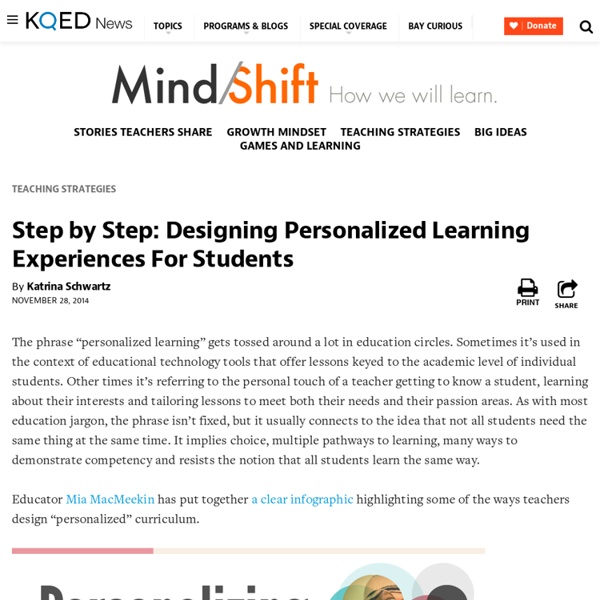 The phrase “personalized learning” gets tossed around a lot in education circles. Sometimes it’s used in the context of educational technology tools that offer lessons keyed to the academic level of individual students. Other times it’s referring to the personal touch of a teacher getting to know a student, learning about their interests and tailoring lessons to meet both their needs and their passion areas. As with most education jargon, the phrase isn’t fixed, but it usually connects to the idea that not all students need the same thing at the same time. It implies choice, multiple pathways to learning, many ways to demonstrate competency and resists the notion that all students learn the same way. Educator Mia MacMeekin has put together a clear infographic highlighting some of the ways teachers design “personalized” curriculum.

The 15 Most Effective Natural Remedies For Anxiety by Dave Mihalovic Herbal therapies are astoundingly popular among and their interest is growing as the dangers of pharmaceuticals become widely known and accepted. In 2008 statistician Patricia M. Barnes of the National Center for Health Statistics and her colleagues reported that almost 20 percent of children and adults in the U.S. had used an herbal medicine during the past year. That percentage according to some experts has doubled.

The Five Tenets of Personalized Learning Cross-posted from the Corwin Connect Blog. I did not know what I was doing when I decided to change the way I taught. I did not know that somewhere out in the education world there was already a term floating around for some of the ideas I had for change, a term that would capture so many of my ideas in one. It was not until a few years of blogging about the changes I had made that someone left a comment on my blog suggesting I learn more about personalizing learning because it seemed like that is what I was talking about. That day, as I googled the term I realized that in my endeavor to create passionate classroom, I had indeed been personalizing learning for all of my students. I was seeing them all as individuals and trying to cater our multi-faceted classroom to fit all of their needs; personalization at its core.

List of Reading Strategies: 8 Tips to Reach Every Reader Unfortunately, getting kids to become book lovers can be a real challenge. Reaching every reader starts with helping students find their keenest interests, introducing them to any and all materials available on the topic, and finding new ways to present material. Here are 8 tips for engaging young readers, while also meeting Common Core and state standards: Sixth form colleges left on starvation rations by government cuts, says report Sixth form colleges are on “starvation rations” as a result of government funding cuts that have put their survival at risk, according to a report. Almost four out of every 10 sixth form principals say it is likely their college will cease to be a going concern within five years, according to Tuesday’s report, while seven out of 10 say they cannot provide students with a quality education with the money they are set to receive next year. Research by the Sixth Form Colleges Association (SFCA), which represents England’s 93 sixth form colleges, reveals an alarming picture of a beleaguered sector “under serious threat”, with almost all college leaders worried about the financial health of their institutions. In contrast with schools, where the government has largely protected budgets, sixth form colleges have been subjected to three separate funding cuts since 2011, with the threat of more to come as the treasury seeks further savings.

A Diagram Of 21st Century Pedagogy - The modern learner has to sift through a lot of information. That means higher level thinking skills like analysis and evaluation are necessary just to reduce all the noise and establish the credibility of information. There is also the matter of utility. Metacognition: Nurturing Self-Awareness in the Classroom How do children gain a deeper understanding of how they think, feel, and act so that they can improve their learning and develop meaningful relationships? Since antiquity, philosophers have been intrigued with how human beings develop self-awareness -- the ability to examine and understand who we are relative to the world around us. Today, research not only shows that self-awareness evolves during childhood, but also that its development is linked to metacognitive processes of the brain.

What Do We Really Mean When We Say ‘Personalized Learning’? The idea of personalized learning is seductive – it implies moving away from the industrialized form of education that pumps out cookie-cutter students with the same knowledge and skills. After decades of this approach, it is clear that all children don’t learn the same way and personalization seems to honor those differences. However, that term has taken on several different meanings. For the Hesitant Teacher: Leveraging the Power of Minecraft If there’s any video game that has successfully made its way into the classroom, it’s Minecraft. There’s a small subset of teachers using all kinds of digital games in interesting ways, but the blockbuster hit Minecraft and its educational counterpart MinecraftEDU have reached much wider audiences. But getting started with MinecraftEDU can be intimidating for teachers who don’t consider themselves “gamers” and aren’t sure how to harness the engagement and excitement of Minecraft.