Archive of Recorded Poetry and Literature 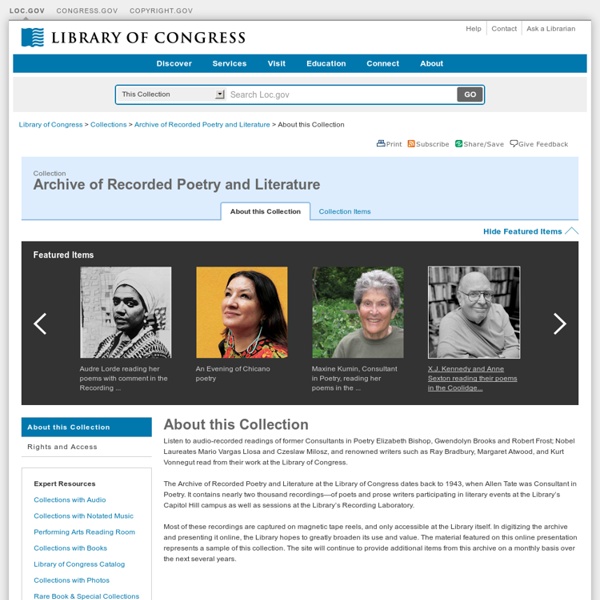 Listen to audio-recorded readings of former Consultants in Poetry Elizabeth Bishop, Gwendolyn Brooks and Robert Frost; Nobel Laureates Mario Vargas Llosa and Czeslaw Milosz, and renowned writers such as Ray Bradbury, Margaret Atwood, and Kurt Vonnegut read from their work at the Library of Congress. The Archive of Recorded Poetry and Literature at the Library of Congress dates back to 1943, when Allen Tate was Consultant in Poetry. It contains nearly two thousand recordings—of poets and prose writers participating in literary events at the Library’s Capitol Hill campus as well as sessions at the Library’s Recording Laboratory. Most of these recordings are captured on magnetic tape reels, and only accessible at the Library itself. In digitizing the archive and presenting it online, the Library hopes to greatly broaden its use and value. The material featured on this online presentation represents a sample of this collection.

Young Adult Book Reviews Genre: Historical Fiction # of Pages: 293 RAC: Yes Margaretha lives on her father’s estate in Germany and knows she must choose a suitor to marry soon. When a man named Claybrook comes and begins to woo her she thinks he might be the one, but then an injured man is brought to the healer’s cottage from England. World War III may have already begun: U.S. empire vs. Russia, China and North Korea (NaturalNews) Military historians have said that the world stumbled into World War I, while it ran headlong into World War II. How will World War III begin? It may have started already. A few geopolitical observers think World War III began when the United States and much of the West launched military campaigns against militant Islam.

Best Books 2014: Nonfiction June 9, 2015 School Library Journal The world's largest reviewer of books, multimedia, and technology for children and teens Best Books 2014: Nonfiction Recent Posts US changes nuclear strategy to first strike: Analyst A US-made nuclear weapon (file photo) The United States has changed its military doctrine in favor of using nuclear weapons for preemptive purposes, an analyst writes for Press TV. “US war doctrine has been changed. US nuclear weapons are no longer restricted to a retaliatory force, but have been elevated to the role of preemptive nuclear attack,” Paul Craig Roberts wrote in a column for Press TV website.

19 Young Adult Authors To Follow On Instagram Give your Instagram stream a literary makeover with this definitive list of young adult authors whose accounts you should be following. No seriously, go follow them and thank us later. If you like your InstaGs with a side of snark, then make sure to give these authors’ pics a double tap. CIA and FBI Work with Fascists in Ukraine as ‘War in Europe’ Unfolds ‘Andriy Parubiy, the National Security and Defense Council boss of the junta in Kyiv, announced on Sunday the Ukrainian military will expand the “active stage of the operation in towns where extremists and terrorists are carrying out illegal activities.” The renewed effort to assert control and defeat anti-junta activists and paramilitaries in Donetsk, Sloviansk, Kramatorsk, Kostyantynivk and other towns in eastern Ukraine coincides with news the CIA and FBI will work with the regime to put down popular uprisings against the government in Kyiv. On Monday, coup Interior Minister Arsen Avakov said the failure of police in Odessa, where violence claimed the lives of dozens of people over the last few days, has resulted in the formation of “Kiev-1,” a paramilitary comprised of “civil activists” who previously worked with the fascist Right Sector and Svoboda to overthrow Ukraine’s elected president in February.’

What's New in YA - The Official YABC Blog Are you wondering what's new in YA today? Check out these wonderful new releases! Stella Cross's heart is poisoned. After years on the transplant waiting list, she's running out of hope that she'll ever see her eighteenth birthday. Then, miraculously, Stella receives the transplant she needs to survive. Determined to embrace everything she came so close to losing, Stella throws herself into her new life.

Covert chemical warfare/and a time bomb in Ukraine Jon RappoportActivist Post In the entirely justified blow-up over the poisonous effects of Monsanto’s Roundup, recent history has been pushed to the side. There are, of course, other companies and other poisons (herbicides, pesticides). For example, read this from “Transport and Trade,” published by the Pesticide Action Network: “…US [companies] shipped nearly 1.7 billion pounds of pesticide products to other countries from 2001-2003… “more than 32 tons per hour…

YALSA Award for Excellence in Nonfiction for Young Adults YALSA launched a Teen Book Finder Database, a one-stop shop for finding YALSA's selected lists and award winners. Search this free resource by award, list name, year, author, genre and more, as well as print customizable lists. This replaces the individual award and list web pages on YALSA’s site that are not searchable and that are organized only by year. YALSA's Award for Excellence in Nonfiction honors the best nonfiction book published for young adults (ages 12-18) during a Nov. 1 – Oct. 31 publishing year.

China-Japan Spat Could Lead to World War III Chris CarringtonActivist Post As the row over the rocks that are claimed by not only Japan and China, but South Korea and Taiwan continue, a former UN Ambassador has warned that any conflict in the region could quickly become global. Former Chinese Ambassador Sha Zukang said in a report in The China Times: If China started a war with Japan, it would be much larger than both the Sino-Japanese War and World War II, said Sha. The United States and Japan should cooperate with China to maintain regional peace. In the last few days Japan has set up its own air defense zone, and that has spurred South Korea to do the same.

Awards for Children's and YA Literature By State Links to U.S. Readers'-Choice & Other-Criteria Awards, by state CYALR is honored to host this list with permission. Transcendental Meditation: Proven To Prevent Disease (PreventDisease.com) More than 350 peer-reviewed research studies on the Transcendental Meditation (TM) technique have been published in over 160 scientific journals. It increases cardiovascular quality, lowers blood pressure, decreases anxiety and among quantum physicists is considered the fourth state of consciousness in which the entire brain is engaged. Russell Brand Interviews Quantum Physicist Dr John Hagelin This is a small segment of actor/comedian Russell Brand’s interview with renowned quantum physicist Dr. Top Tuesday: Top Ten Most Anticipated Releases for the Rest of 2015 It’s pretty early for me to think about new releases coming out this year since many new books are released in the fall. But I do love sharing what new books I’m waiting for and there are quite a few that are published this summer. I love waiting for new releases and as I have three Chapters gift cards to spend, this will be an excellent opportunity to look at books that I would like to pre-order. 1.