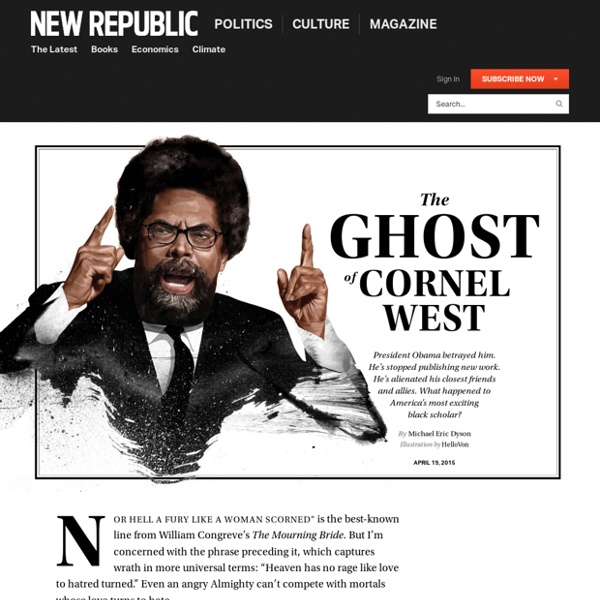 Nor hell a fury like a woman scorned” is the best-known line from William Congreve’s The Mourning Bride. But I’m concerned with the phrase preceding it, which captures wrath in more universal terms: “Heaven has no rage like love to hatred turned.” Even an angry Almighty can’t compete with mortals whose love turns to hate. Cornel West’s rage against President Barack Obama evokes that kind of venom. West’s animus is longstanding, and only intermittently broken by bouts of calculated love. Despite West’s disapproval of Obama, he eventually embraced the political phenom, crossing the country as a surrogate and touting his Oval Office bona fides. Obama welcomed West’s support because he is a juggernaut of the academy and an intellectual icon among the black masses. Yet West is, in my estimation, the most exciting black American scholar ever. It was that sense of scholarly excitement that drew me to West after I read his first book, Prophesy Deliverance! Hiroko Masuike / Getty Images

Why Junot Diaz urges you to read more promiscuously - Home | q In a rich and wide-ranging interview, Pulitzer Prize winning writer Junot Diaz joins Shad to discuss his ongoing push for real diversity in the largely-white worlds of Western academia and literature. The Dominican-American author also comments on the importance of idealism in young people, why there's always a struggle when you come from the margins, and why — in a world packed with advice for writers — he offers his advice to readers. "Drop down out of Instagram time, out of Facebook time. Drop down into a much more human rhythm," says Diaz, adding that, for the sake of our culture and our future, we all have to learn to slow down. "To read a book is to be in the slow zone of the human." Forget advice for writers.

This foreigner's guide to Irish accents will give you a good laugh Ear-gasmic sounds here. With St Patrick's Day fast approaching, we're certain that a huge amount of tourists will be flooding into the 32 counties as Irish people welcome them with open arms. We always did wonder what it would be like though if we placed a foreigner into a bar in West Cork, Derry or Dublin? Would they be able to understand what the hell was being said? This bluffer's guide to the Irish accent might help them acclimatize though thanks to the good people at Facts. Mass Killings in the U.S.: Masculinity, Masculinity, Masculinity This article was first published by The Huffington Post Schools in Philadelphia are currently on high alert because of a threat of violence made against “a university near Philadelphia.” The threat was posted on 4chan, an anonymous message board, on Friday, the day after a murder-suicide that left 10 people dead in yet another campus shooting. The new threat, echoing other comments, praised the Oregon shooter for being part of a “Beta Rebellion,” a beta being a weak, unattractive man who lacks confidence and can’t get a girl. An unnamed police official described the Oregon shooter this way, “He didn’t have a girlfriend, and he was upset about that. Prior to last week’s mass shooting, the gunman allegedly also wrote a 4-chan warning, “Don’t go to school tomorrow if you are in the Northwest.” It’s impossible to confirm if the original post was made by the gunman, but the commentary is insightful and disturbing nonetheless. Consider schools, for example.

Most Prisoners Are Mentally Ill — The Atlantic Occasionally policymakers and activists will talk about how the justice system needs to keep mentally ill people out of prisons. If it did that, prisons would be very empty indeed. A new Urban Institute report points out that more than half of all inmates in jails and state prisons have a mental illness of some kind: Percent of Inmates Who Have Mental or Mood Issues The most common problem is depression, followed by bipolar disorder. Types of Mental Issues Among State and Federal Inmates The numbers are even more stark when parsed by gender: 55 percent of male inmates in state prisons are mentally ill, but 73 percent of female inmates are. An increasingly popular program might help thin the ranks of these sick, untreated inmates. For example, just last week Northampton County in eastern Pennsylvania saw its first case processed in its newly created mental-health court. The courts aren't a cure-all: Two-thirds of them use jail time to punish noncompliance with treatment.

How a book club is helping to keep ex-offenders from going back to jail Robert Barksdale steps in front of the students in an English class at Eastern High School, searching for some semblance of redemption. “For me, school is a treat because I never got to be in school, for real,” he begins. He always envisioned visiting a school to speak to students but was beginning to realize the pressures of standing in front of the classroom. He scans the room and says: “Y’all are a little intimidating.” Barksdale was around their age when he chose the streets over school. Now, at 25, he is one. Phil Mosby, 26, hands out copies of a poem for the students to read. They were all teenagers then, charged as adults for their violent crimes. Over the past year, they finally came home. So they stick together. They fall into a high-risk category: Juveniles tried as adults are 34 percent more likely than youth tried as juveniles to return to prison, according to a 2007 report from the Centers for Disease Control and Prevention. He stops to collect himself. Makes me wanna cry

The Poorest Corner Of Town FERGUSON, Mo. — “I am!” “Mike Brown!” “I am!” “Mike Brown!” By midnight on Wednesday, this call-and-response, and others like it — “Hands up, don’t shoot,” “What’s his name? Mike Brown,” and the old standby, “No justice, no peace!” The protests, nearly everyone agrees, were about more than Brown, about more even than police violence. The protests were also about more than Ferguson. Bishop Timothy Woods, one of the clergy members working to keep the peace, said the protests reflected a feeling of hopelessness among young people in low-income communities across the country. “They kind of assume that how they are now is how they’re always going to be,” Woods said before being called away by a police officer to defuse another tense encounter. ‘If you’d asked me, I would’ve expected something like this would happen in North County,” said Todd Swanstrom, a University of Missouri-St. The St. Ferguson itself, however, is about two-thirds black and is largely integrated internally.

Black Girls Should Matter, Too In a classroom at the University of Pennsylvania, more than a dozen black girls and women gather on a recent Saturday afternoon. A simple game begins as an icebreaker for the workshop. “Stand up if your racial identity ever made anyone doubt your abilities,” the session’s leader says. Everyone stands. “Stand up if you’ve ever been told to act like a lady.” Everyone stands again. Across generations—from high-school students to professionals with salt-and-pepper hair—a common reality appears. With a tone of resignation, Horton recalled a counselor who she said doubted her aptitude for an honors biology course. A mounting body of evidence suggests that black students across the country face daunting odds in their quest for an equitable education. Given the growing recognition that race and poverty hinder educational opportunity and outcomes, leaders ranging from policymakers to businesspeople have committed to tackling this crisis. The president’s crusade is spreading across the country.

The Wrong Way to Teach Grammar A century of research shows that traditional grammar lessons—those hours spent diagramming sentences and memorizing parts of speech—don’t help and may even hinder students’ efforts to become better writers. Yes, they need to learn grammar, but the old-fashioned way does not work. There is a real cost to ignoring such findings. In my work with adults who dropped out of school before earning a college degree, I have found over and over again that they over-edit themselves from the moment they sit down to write. They report thoughts like “Is this right? Is that right?” These students are victims of the mistaken belief that grammar lessons must come before writing, rather than grammar being something that is best learned through writing. Happily, there are solutions. There are also less immediately apparent costs to having generations of learners who associate writing only with correctness.

from Citizen: “You are in the dark, in the car...” by Claudia Rankine You are in the dark, in the car, watching the black-tarred street being swallowed by speed; he tells you his dean is making him hire a person of color when there are so many great writers out there. You think maybe this is an experiment and you are being tested or retroactively insulted or you have done something that communicates this is an okay conversation to be having. Why do you feel okay saying this to me? You wish the light would turn red or a police siren would go off so you could slam on the brakes, slam into the car ahead of you, be propelled forward so quickly both your faces would suddenly be exposed to the wind. As usual you drive straight through the moment with the expected backing off of what was previously said. When you arrive in your driveway and turn off the car, you remain behind the wheel another ten minutes. When the stranger asks, Why do you care? He is holding the lidded paper cup in one hand and a small paper bag in the other. Now there you go, he responds.