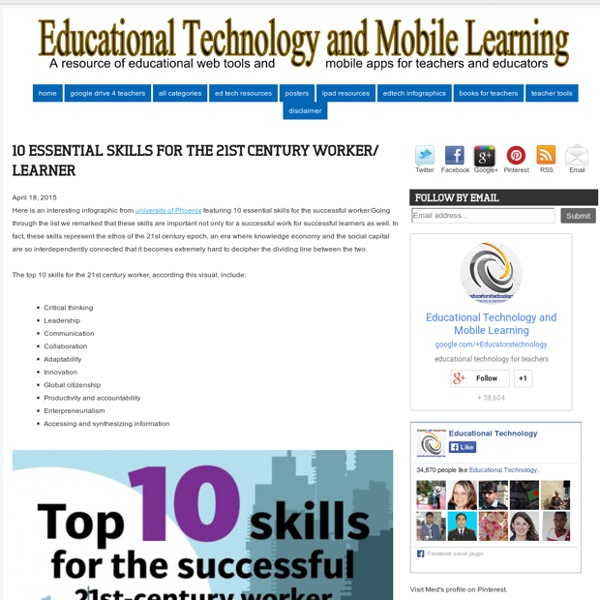 April 18, 2015 Here is an interesting infographic from university of Phoenix featuring 10 essential skills for the successful worker.Going through the list we remarked that these skills are important not only for a successful work for successful learners as well. In fact, these skills represent the ethos of the 21st century epoch, an era where knowledge economy and the social capital are so interdependently connected that it becomes extremely hard to decipher the dividing line between the two. The top 10 skills for the 21st century worker, according this visual, include: Critical thinkingLeadershipCommunicationCollaborationAdaptabilityInnovationGlobal citizenshipProductivity and accountabilityEnterpreneurialismAccessing and synthesizing information

A Very Good Checklist for Assessing 21st Century Learning Skills January 29, 2015 Here is another great resource from Dr. Jackie Gerstein, one of our favourite EdTech bloggers. Jackie designed this beautiful chart featuring 12 attributes and skills that teachers should tend to in their instruction. You can use it as a self-assessment checklist to help you evaluate your teaching practice. What I like the most about this chart is the fact that it emphasizes the social and affective component in learning, something which is often overlooked in today’s digitally-focused learning paradigms.

The Future of Work: Quantified Employees, Pop-Up Workplaces, And More Telepresence For many people, especially those working at desk jobs, the workplace is very different than it was 20 years ago: there’s a computer at every desk, telecommuting is fairly common, and the traditional cubicle is giving way to more collaborative spaces. We’ve seen predictions about where we’ll go from here before; now PSFK, a popular blog that also happens to be a thriving consultancy, has come up with its own version of the future of work, described in a new 138-page report. It’s not as fantastical as many future-forward reports--it’s planted firmly in ideas that are already gaining a lot of traction. Perhaps that makes it more accurate. Online referencing generator Access to information has never been easier for students as traditional print resources are supplemented with information from a plethora of World Wide Web sources. However, the ease of information access has developed a 'cut-and-paste' mentality to research, resulting in a rise in plagiarism among the student population. In order to minimise this problem, students need to be aware of the importance of acknowledging sources and, in particular, the conventions of referencing. This in itself can be problematic as teachers and teacher librarians often struggle to offer advice on referencing the ever-growing range of information sources. The webpage for SLASA's online referencing generator

Webster's Visual Dictionary A dictionary with a new point of view that catches the eye and enriches the mind. 20,000 terms with contextual definitions,developed by terminology experts; 6,000 full-color images of a wide variety of objects from all aspects of life; One essential reference. The Visual Dictionary is designed to help you find the right word at a glance. The Other 21st Century Skills Many have attempted to identify the skills important for a learner today in this era of the 21st century (I know it is an overused phrase). I have an affinity towards the skills identified by Tony Wagner: Critical thinking and problem-solvingCollaboration across networks and leading by influenceAgility and adaptabilityInitiative and entrepreneurialismEffective oral and written communicationAccessing and analyzing informationCuriosity and imagination Today I viewed a slideshow created by Gallup entitled, The Economics of Human Development: The Path to Winning Again in Education. Here are some slides from this presentation.

The Four Most Desirable Leadership Competencies In over 60 searches for top executives, we’ve been asked to look for the same core competencies again and again; relationship building, strategic thinking, and communication. Other requirements change from search to search, but these four competencies are so consistent that they seem to be almost universal. Whether you’re looking to hone your own leadership skills or starting out an executive search, these competencies are a good place to start. 1) Integrity Integrity permeates every aspect of a leader’s universe – every decision, relationship and action should be guided by ethics and company values.

10 well paid jobs of the future Mr Bellini posited the idea of an elderly well-being consultant, who specialises in personalised care for older patients, or a memory augmentation surgeon who helps counter memory loss. He also saw big changes in farming as food resources became scarce, with genetically modified crops becoming common and crops grown vertically in areas resembling multi-storey car parks to save space. Ian Pearson, a futurologist who wrote You Tomorrow, sees job growth in the field of augmented reality, where the real world is overlaid with computer-generated images. “When you look at a building it’s constrained by planning laws, but in cyberspace you can make it look however you want,” he said.

Thing 31: Evidence Based Practice – Getting Started If school librarians can’t prove they make a difference, they may cease to exist.(Ross Todd – The Evidence-Based Manifesto for School Librarians SLJ, 2008) This first lesson in our latest Cool Tools track was inspired by conversations that started at a recent workshop by Jennifer LaGarde on annual reports and collecting data. And by the work of Ross Todd, Lyn Hay and Joyce Valenza (among many others!)

The Skills Leaders Need at Every Level A few weeks ago, we were asked to analyze a competency model for leadership development that a client had created. It was based on the idea that at different points in their development, potential leaders need to focus on excelling at different skills. For example, in their model they proposed that a lower-level manager should focus on driving for results while top executives should focus on developing a strategic perspective. Intuitively, this makes sense, based as it is on the assumption that once people develop a skill, they will continue to exercise it.

Future of Work: What Skills Will Help Us Keep Pace? From Elon Musk’s tweet that artificial intelligence may be more dangerous than nuclear weapons to the growing clamor of voices warning robots will take away our jobs, it is clear we are focusing more on the problems of AI, robotics, and automation than the solutions. While the problems are real and should be taken into account, social innovators around the world are already working to deliver solutions. It’s true that today’s technology is reworking the economy and our role in it. But this needn’t herald economic end times.

ACRL Report Shows Compelling Evidence of Library Contributions to Student Learning and Success A new report issued by ACRL, “Documented Library Contributions to Student Learning and Success: Building Evidence with Team-Based Assessment in Action Campus Projects,” shows compelling evidence for library contributions to student learning and success. The report focuses on dozens of projects conducted as part of the program Assessment in Action: Academic Libraries and Student Success (AiA) by teams that participated in the second year of the program, from April 2014 to June 2015. Synthesizing more than 60 individual project reports (fully searchable online) and using past findings from projects completed during the first year of the AiA program as context, the report identifies strong evidence of the positive contributions of academic libraries to student learning and success in four key areas: Students benefit from library instruction in their initial coursework. Join a free ACRL Presents live webcast to hear more from the report authors on Monday, May 9, from 1:00 — 2:00 p.m.

Technology and Interactive Notebooks – Teaching Without a Quill This is 100% inspired by Ditch the Book writer Matt Miller using sketch notes and incorporation of technology. Go check him out if you haven’t already. Now, on to what has worked in my room..