Coding in the Classroom: A Long-Overdue Inclusion 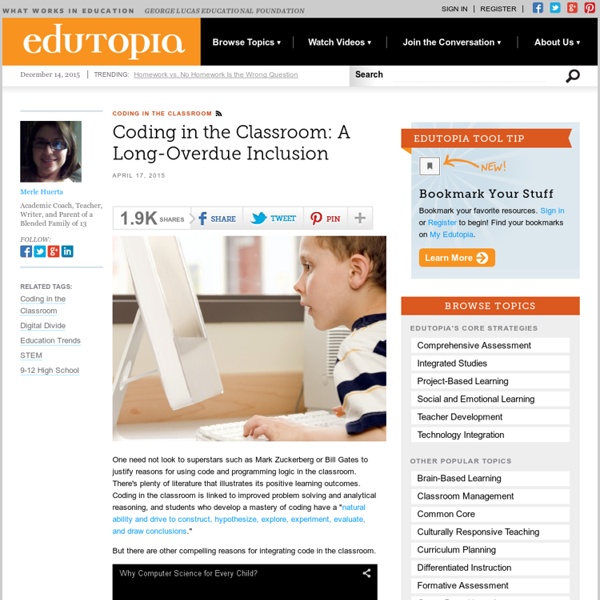 One need not look to superstars such as Mark Zuckerberg or Bill Gates to justify reasons for using code and programming logic in the classroom. There's plenty of literature that illustrates its positive learning outcomes. Coding in the classroom is linked to improved problem solving and analytical reasoning, and students who develop a mastery of coding have a "natural ability and drive to construct, hypothesize, explore, experiment, evaluate, and draw conclusions." But there are other compelling reasons for integrating code in the classroom. Reasons to Teach Coding 1. Wired Magazine reported that reading and writing code is the new literacy. 2. Coding in the classroom is a means of bridging the digital divide. 3. Temple Grandin, author and professor at Colorado State University and an autistic adult, said, "Without the gifts of autism, there would probably be no NASA or IT industry." Knowing there are programs for kids with ASD is good news for parents who shoulder the responsibility. 4.

edutopia According to Code.org, 90 percent of parents in the U.S. want their children to learn computer science—it will be crucial for many jobs in the near future—but only 40 percent of schools teach it. Critics claim that it is mainly the more affluent schools that offer computer science courses, thus denying those who attend poorer schools the chance to learn necessary skills. A focus on STEM is not enough: Code.org also reports that while 70 percent of new STEM jobs are in computing, only 7 percent of STEM graduates are in computer science. It is imperative that savvy schools begin to focus some STEM resources on computer science and programming. In my opinion, parents of every student in every school at every level should demand that all students be taught how to code. They need this skill not because they’ll all go into it as a career—that isn’t realistic—but because it impacts every career in the 21st-century world.

What Does It Take to Do Computer Programming? Phenomenographic studies in computing education research have previously focused on learning "programming thinking" [3], the act of learning to program [2], and conceptions of learning generally in an engineering context [10]. In the present study we analyze and discuss "what it takes to do computer programming" using phenomenography as research approach. This study is based on a large survey dataset gathered in summer outreach courses for K-12 students. The analysis resulted in 12 qualitatively different categories belonging to five separate, emergent themes: Syntax and language features, nature of programming work generally, computational thinking and problem solving, prerequisites, and auxiliary skills. We additionally reviewed whether the students' previous experience explains the categories, and observed that a mechanistic view of programming was prevailing among the inexperienced users, while experienced students more often stressed algorithmic thinking and logical reasoning.

28 Tools to Learn Computer Programming From edshelf. by edshelf: A discovery engine of websites, mobile apps, desktop programs, and electronic products for teaching and learning. Teaching primary and secondary students how to program has become a hot topic lately. Even people like United States President Barack Obama to actress Angela Bassett to music artist Shakira have spoken about the value of computer programming in an initiative called Hour of Code. With good reason too. Technology is a major part of our lives. Knowing how to build new technologies means having the ability to shape its direction.

Enhancing Learning Through Differentiated Technology Each day, teachers face the task of helping students stay engaged, show growth, and master the curriculum. How can they do this? Should they open the textbook and start teaching on page one? Python overtakes French as the most popular language taught in primary schools Related topicsSkills Related articles Share article 580 282 4 152googleplus22 Short of time?

Kickstarter Alert: Learn to Program With an Adorable Little Robot Called Wink The Wink robots. Image courtesy Plum Geek. The latest project to help teach kids (or adults) learn to code is just finishing up on Kickstarter, but there’s still a bit of time left to get in on it. New to crowdfunding? Bill would allow Florida students to replace foreign language with computer language courses LAND O'LAKES — Sunlake High School sophomore Chris Collins sees little value in his Spanish language courses. "I was bored out," said Collins, 15. "If I want to travel in the future, I'd probably want to learn the language. I'm not planning to travel." He much prefers learning the syntax and structure of computer programming, a foundation for the burgeoning international technology trade.

Teaching kids how to write computer programs, by Marshall Brain by Marshall Brain Let's say that you have children, and you would like to help them learn computer programming at a youngish age. As the father of four kids, I have tried to approach it from several different angles. What I would like to do here is collect some ideas for parents who are looking for different options. Let's start with a something important: Every kid is different. Some kids are reading and writing fluently years ahead of other kids.