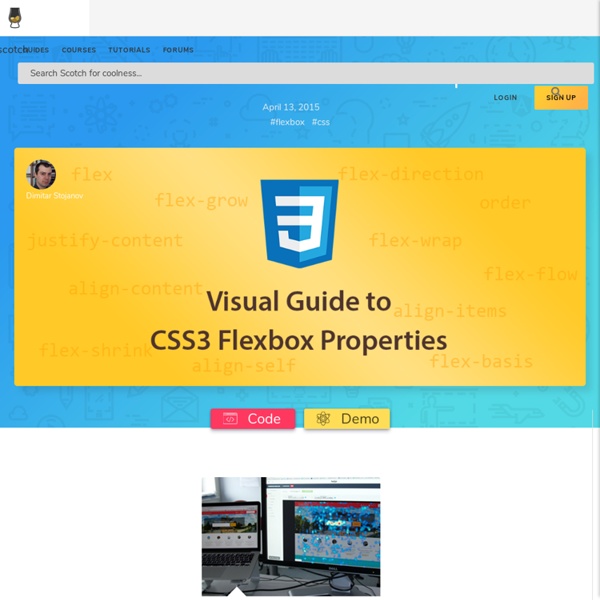 The Flexbox Layout officially called CSS Flexible Box Layout Module is new layout module in CSS3 made to improve the items align, directions and order in the container even when they are with dynamic or even unknown size. The prime characteristic of the flex container is the ability to modify the width or height of its children to fill the available space in the best possible way on different screen sizes. Many designers and developers find this flexbox layout easier to use, as positioning of the elements is simpler thus more complex layouts can be achieved with less code, leading to simpler development process. Flexbox layout algorithm is direction based unlike the block or inline layout which are vertically and horizontally based. This flexbox layout should be used for small application components, while new CSS Grid Layout Module is emerging to handle the large scale layouts. Basics The browser support for the latest flexbox specification is: Usage Flexbox container properties Values: flex

12 Websites for Royalty Free Stock Photos for Business Advertising 12 Websites for Royalty Free Stock Photos for Business Advertising One of the most common questions I get is: "Where can I get free photos or royalty free stock photos for business advertising, marketing, etc?" The answer is not so obvious since each business has its own unique need. A Complete Guide to Flexbox Background The Flexbox Layout (Flexible Box) module (currently a W3C Last Call Working Draft) aims at providing a more efficient way to lay out, align and distribute space among items in a container, even when their size is unknown and/or dynamic (thus the word "flex"). The main idea behind the flex layout is to give the container the ability to alter its items' width/height (and order) to best fill the available space (mostly to accommodate to all kind of display devices and screen sizes). A flex container expands items to fill available free space, or shrinks them to prevent overflow. Most importantly, the flexbox layout is direction-agnostic as opposed to the regular layouts (block which is vertically-based and inline which is horizontally-based).

7 CSS Units You Might Not Know About It’s easy to get stuck working with the CSS techniques we know well, but doing so puts us at a disadvantage when new problems surface. As the web continues to grow, the demand for new solutions will also continue to grow. Therefore, as web designers and front end developers, we have no choice but to know our toolset, and know it well. That means knowing even the specialty tools - the ones that aren’t used as often, but when they are needed, are exactly the right tool for the job. Today, I'm going to introduce you to some CSS tools you might not have known about before. Porting from WordPress to Storyspace, 4: sidethreads and projections – The Eclectic Light Company In the last article, I showed how I incorporated an alternative narrative thread in my Storyspace hypertext account of the history of oil painting, and how to incorporate references using stretchtext. One issue which I did not resolve last time was distinguishing to the reader which passages of blue text are stretchtext, and thus will not change the context, and which are text links, and will change the context when the reader clicks on them. I have had time to think this through, and I believe that in this case it is important, but that changing the colour of the text is not the best way to go about a solution. Instead, each text link is going to be prefaced by Unicode character HEAVY ROUND-TIPPED RIGHTWARDS ARROW (U+279C), or ➜. Depending on the font and size which you use, you may prefer a different character, but I have looked at emoji and other pointer/arrow characters available, and that seems to work best here. The Storyspace 3 hypertext document is here: historyofoils2

Understanding the CSS animation-fill-mode Property I’m sure just about all of us working in front-end development have fiddled with CSS keyframe-based animations at some point. Some of us may have even created some pretty complex demos and experiments with this feature. If you want a comprehensive introduction to the topic, my 2011 article on Smashing Magazine is still a good option. In this article, however, I wanted to focus on a single part of the CSS Animations spec: the animation-fill-mode property. This is the one animation-based property that isn’t very self-explanatory. For example, nobody really gets confused by animation-name, animation-duration, and so forth… But what on earth does “fill mode” mean? **VERY GOOD**Smoothie-3D-photo First of all, thank you all for testing the Smoothie-3D modelling solution. After reading this tutorial, and if you carefully follow the explanation, you will be able to make 3D textured models like the squirrel and publish them on the web. No more than 10-15 minutes will be needed to complete this tutorial. A 3D model is made of several shapes. Smoothie-3D offers classic primitives like cubes, spheres, cylinders, cones and text.

Flexbox Cheatsheet Cheatsheet While I am no stranger to the magic of Flexbox, I find that I am not using it very often just yet. As a result I end up pausing and referring back to this post at CSS-Tricks whenever an opportunity to utilize its powers presents itself. I set out to create a quick visual to summarize Flexbox when I run into these moments of pause in the future. I like to think of it as a little diagram (flow chart? decision tree-ish thing?)

Using vw and vh Measurements In Modern Site Design Some CSS properties and values don’t gain a lot of developer attention, either because a particular spec is not "sexy" enough or because use-cases don’t seem immediately obvious. Good examples of the latter include the vw, vh, vmax and vmin length measurements, which have been part of the CSS3 Values & Units Module for some time but are just now finding support in modern browsers. As we’ll see in the next article, these new measuring systems are natural fits for creating adaptive and responsive site designs; for now, let’s take at the general idea of the new units. Why Do We Need Another Way Of Measuring Things In CSS? The principles behind vw, vh are simple: they represent percentages of the browser viewport’s width and height, respectively.

Rise Of The Planet Of Annotations - HapYak Late last night after an exhausting day I watched Rise of the Planet of the Apes on HBO, again, and it got me thinking. Caesar was a chimpanzee who got smart and eventually led a primate revolution that took over the world. That’s how I like to think about Video Annotations. In 2007 a small company named Omnisio launched a product allowing people to annotate videos and even sync them to slideshows. Just to be clear for the uninitiated, to annotate a video means to add other content that will appear synchronous to the playback of that video. It was cool stuff and YouTube, seeing the promise, quickly acquired them to make it their very own.

Color of the Year 2016 - Rose Quartz and Serenity A softer take on color for 2016: For the first time, the blending of two shades – Rose Quartz and Serenity are chosen as the PANTONE Color of the Year As consumers seek mindfulness and well-being as an antidote to modern day stresses, welcoming colors that psychologically fulfill our yearning for reassurance and security are becoming more prominent. Joined together, Rose Quartz and Serenity demonstrate an inherent balance between a warmer embracing rose tone and the cooler tranquil blue, reflecting connection and wellness as well as a soothing sense of order and peace. The prevalent combination of Rose Quartz and Serenity also challenges traditional perceptions of color association. In many parts of the world we are experiencing a gender blur as it relates to fashion, which has in turn impacted color trends throughout all other areas of design.

Learn CSS Flexbox in 3 Minutes – Learning New Stuff – Medium In this post you’ll learn the most important concepts of the flexbox layout in CSS, which will make your life easier if you find yourself struggling with CSS layouts from time to time. We’ll only focus on core principles, while leaving out stuff you shouldn’t care about until you’ve understood the basics. 1. The container and the item What’s the Difference Between “:before” and “ When using or researching CSS pseudo-elements, you may have come across different syntax for the :before and :after pseudo-elements, specifically in the form of a preceding double colon, instead of the traditional single colon. This seems a little confusing at first, but there’s actually a pretty simple explanation. I had assumed that there would be some difference in the way each functioned, but that’s not the case, as the short and long answers below make clear. The Short Answer

50 Free Animation Tools And Resources For Digital Learners 50 Animation Tools & Resources For Digital Learners by Lisa Chesser, opencolleges.edu.au A purple monster with wild curls spiraling out of control explains the economics of oil production in the Sudan to students in Los Angeles, Sydney, Berlin, Jerusalem, and Riyadh. That is education and animation working together to teach students everywhere, everything they ever wanted to know. Educators need only utilize the tools available, most of them for free.