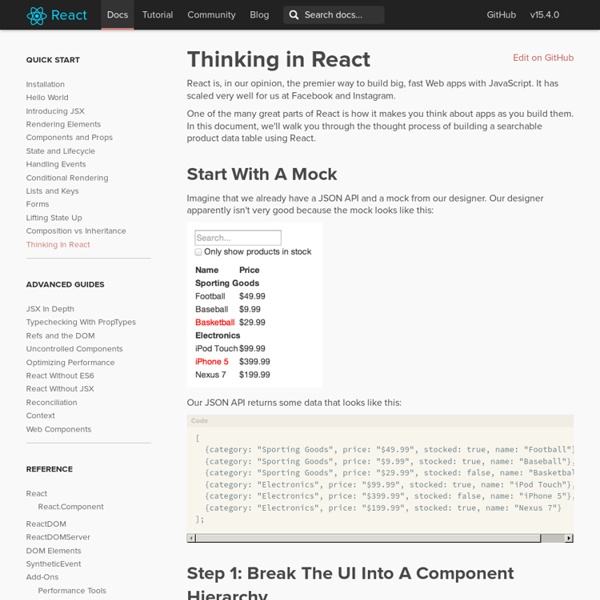 Edit on GitHub React is, in our opinion, the premier way to build big, fast Web apps with JavaScript. It has scaled very well for us at Facebook and Instagram. One of the many great parts of React is how it makes you think about apps as you build them. In this document, we'll walk you through the thought process of building a searchable product data table using React. Start With A Mock # Imagine that we already have a JSON API and a mock from our designer. Our JSON API returns some data that looks like this: Step 1: Break The UI Into A Component Hierarchy # The first thing you'll want to do is to draw boxes around every component (and subcomponent) in the mock and give them all names. But how do you know what should be its own component? Since you're often displaying a JSON data model to a user, you'll find that if your model was built correctly, your UI (and therefore your component structure) will map nicely. You'll see here that we have five components in our simple app. And That's It #

Refactoring React Components to ES6 Classes Here at NMC, we're big fans of the React library for building user interfaces in JavaScript. We've also been experimenting with the next version of JavaScript, ES6, and were excited to see the latest version of React promote ES6 functionality. Starting with React 0.13, defining components using ES6 classes is encouraged. Refactoring a React 0.12 component defined using `createClass` to an 0.13 and beyond class only requires a few straightforward refactoring steps.

ReactJS: Mastering Best Practices (Tutorial & Blog) This is the React Convention™: convention over configuration step-by-step guide for the React Native and ReactJS developers. What is that e-book about? This is the online convention and tutorial e-book for React.JS Developers. React is not only the View (in MVC) anymore - learn your way to use React and Redux altogether. Application Architecture for Building User Interfaces Flux is the application architecture that Facebook uses for building client-side web applications. It complements React's composable view components by utilizing a unidirectional data flow. It's more of a pattern rather than a formal framework, and you can start using Flux immediately without a lot of new code. Flux applications have three major parts: the dispatcher, the stores, and the views (React components).

christianalfoni WebApp Enthusiast Validation is complex. Validation is extremely complex. I think it is right up there at the top of implementations we misjudge regarding complexity. So why is validation so difficult in general? How could we implement this with React JS? Make Your React Components Pretty □ – WalmartLabs – Medium At Walmart Labs we do a lot of peer code reviews, which is great because I get to see all sorts of clever ways to write React components from a variety of talented engineers. In this post I’ll share five of my favorite patterns and shortcuts. But first…

Using React.js and Application Cache for a fast, synced app In many apps at scale, the choice between fast app load and up-to-date data arises at some point, on some level. You can cache aggressively, but you’ll probably be serving stale data at some point. You can retrieve fresh data, but you’ll probably be sacrificing some load time. Static Site Generation with React and Webpack I’ve been dabbling with React for a few months now and using it in several small open source projects to better understand the technology. React’s focus on reusablility, along with the ability to install and require components via npm, provides an elegant way to rapidly build application UI in an efficient and consistent way. It’s also a great way to handle server-side rendering and provides high cohesion between markup and display logic. Note: many of the packages referenced in this post have released major version, breaking updates since this was written. Some of the examples may not work with the latest npm modules, especially the react-router package, which has a much different API now.

Intro to React (Example) In this tutorial we're going to go through the basics of React. We will render a list of posts that we return via a ajax query. This will not be fully functional as I'm also a beginner to react. I'll cover what I know. First off, why react? Complementary Tools · facebook/react Wiki React is a small library that does one thing well. Here's a list of tools we've found that work really well with React when building applications. If you want your project on this list, or think one of these projects should be removed, feel free to edit this page. Debugging Atellier: The smartest way to share interactive components with your team.React Developer Tools: an extension available for Chrome and Firefox that allows you to inspect the React component hierarchy in the Chrome Developer Tools.Pretty Diff: a beautifier that supports JSX and can auto-detect it apart from JavaScript. It provides some minimal level of scope analysis by generating a colorful HTML result to identify variables against the scope where they are declared.

We're a digital studio that melds strategy, design, and technology. Article covers React 0.12, a javascript library for building web-based user interfaces. Updated Jan 5, 2015 with an improved Rewire example. Why is testing a React component so damn hard? If your answer is “use Jest,” then see below, Why not Jest?. Any given React component may include other components. Example my-component.js, javascript + JSX: React.js Essentials - DZone - Refcardz References Helps to access the DOM nodes. Two-way data bindings with mixins Validating properties Primitive types: .string, .number, .func, and .bool. React elements: .element, .node.