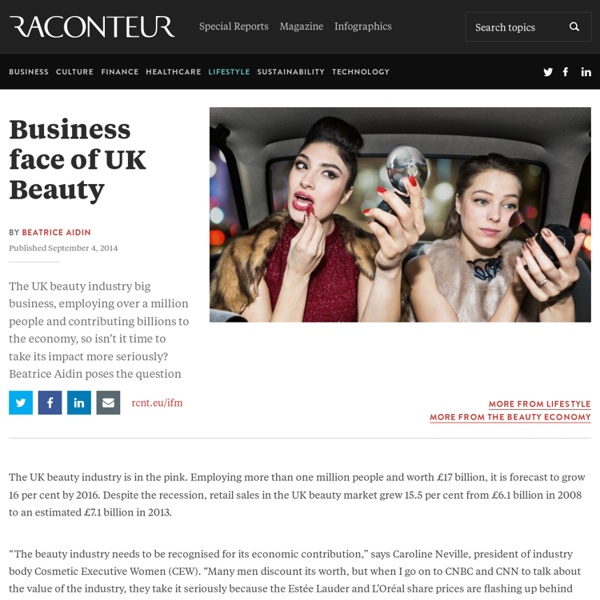 The UK beauty industry is in the pink. Employing more than one million people and worth £17 billion, it is forecast to grow 16 per cent by 2016. Despite the recession, retail sales in the UK beauty market grew 15.5 per cent from £6.1 billion in 2008 to an estimated £7.1 billion in 2013. “The beauty industry needs to be recognised for its economic contribution,” says Caroline Neville, president of industry body Cosmetic Executive Women (CEW). “Many men discount its worth, but when I go on to CNBC and CNN to talk about the value of the industry, they take it seriously because the Estée Lauder and L’Oréal share prices are flashing up behind me. The numbers speak for themselves.” CEW president Caroline Neville with UK chancellor George Osborne at a reception at No 11 Downing Street, October 2014 Related Articles:Beauty and the business woman‘Grey’ pound buys an ageless lookBeauty bucks economic trend Perhaps the tide is turning. Recession proof Some small business even thrived. Big business

Survey Proves We Still Really Need To Talk About Photoshop There’s been a lot of discussion lately about the damaging effects of Photoshop. With all of the media attention the topic receives, some could assume that the use of Photoshop on the vast majority of people seen in magazines, on movie posters and in advertisements is common knowledge. But according to a recent One Poll survey, many people still don’t fully understand the puppeteering that goes on behind computer screens. The UK survey, done on behalf of New Look clothing line, polled over 2,000 women between the ages of 18 and 65 on various aspects of female body image. The findings were somewhat disheartening.

26 Cosmetics Industry Statistics and Trends Cosmetics Industry Statistics The United States cosmetic industry is the largest in the world estimating a total revenue of $54.89 billion. Employing over 53,000 people, the leading company is Procter & Gamble. The following statistics outlines the cosmetic industry market outlook and trends. Cosmetic Product Categories What is the Middle Market? - Definition from Divestopedia The middle market is a significant part of the North American economy. In the U.S., middle market businesses represent one-third of private sector GDP and employ approximately 25% of the total labor force. Because of the wide range of company sizes within the definition, the middle market can be further broken down into the following: Lower Middle Market - $5 - $50 million of revenue; Middle Market - $50 - $500 million of revenue; andUpper Middle Market - $500 - $1 billion of revenue. It is important to distinguish between upper and lower middle market for a few reasons:

Baking: the hottest new makeup trend It’s actually the latest big makeup tend and a quick scan of Instagrammed photos tagged #bakingtechnique reveals scores of women captured with various amounts of powder patted all over their faces. Baking, in the cosmetic sense, involves wetting the skin after foundation and concealer have been applied by using a damp sponge to dust powder over dark shadows or areas of the face that you want to highlight. As well as highlighting facial features, it also sets makeup to keep your look fresh throughout the day. For perfectly baked under-eyes and covering up dark circles, makeup artist Heidi Hamoud recommends using an eye cream such as Bobbi Brown’s Hydrating Eye Cream to prep.

A brief history of Boots No7 What's the story? Around for a somewhat surprising 77 years, No7 was originally a skincare brand launched by Boots with the charming slogan, "The modern way to loveliness". A cosmetics line followed, but production pretty much stopped altogether during the second world war. It was reintroduced in 1942 and then fully relaunched 10 years later with a new tagline: "Better and lovelier than before". The brand has gone through umpteen redesigns and relaunches over the decades to keep up with the changing trends, most recently in 2005 to mark its 70th birthday. It seems, from people I've spoken to, that No7 is a trusted and well-priced brand.

Global cosmetic brands draw their inspiration from Korea and Japan Japanese women have exported the “beauty routine” concept that Koreans have developed and amplified. Then came the BB creams, now followed by compact cushions and facial treatment sheet masks. The quest for a flawless skin and for eternal youth is common to Japan and Korea beauty habits. L'Oréal buys Body Shop for £652m The Body Shop today agreed to a £652.3m takeover by the French cosmetics firm L'Oréal. The British cosmetics retailer, which was started by Anita Roddick in Brighton in 1976 to help support her two daughters, accepted an offer of 300p a share, a large premium on its closing price of 268p. It is expected that Anita and her husband Gordon, co-founder of the business, will make £130m from the sale of the retail chain, which promotes natural products and is against animal testing. Dame Anita said: "For both Gordon and I, this is without doubt the best 30th anniversary gift the Body Shop could have received. L'Oréal has displayed visionary leadership in wanting to be an authentic advocate and supporter of our values."

Makeup Tips to Look Younger - How Your Makeup Is Making You Look Older MISTAKE # 3: Only lining the bottom of your eyes with liner. "So many women I talk to say 'I only line the bottom,'" Soane told us. "And when I ask them why, they say because 'It's easier.' It's tragic; top liner is mandatory." A short history of men and make-up - Charlotte Tilbury When you ask a man who has never worn make-up before to pick up a cosmetic weapon of choice, nine times out of ten he reaches for the eyeliner. Thus is the power of Johnny Depp and Keith Richards before him. But guyliner didn’t begin with Pirates of the Caribbean, just as the man tan was not invented on TOWIE. The history of male cosmetics is a long one, which is why I’m always surprised when I read about it as a relatively modern concept. The earliest records of men using cosmetics were in Asia – in China and Japan 3000BC, men and women used tinctures of gum arabic, gelatin and egg to stain their fingernails to signify their status in society.

Elderly ladies reveal what they'd do differently if they were young again With working hours extending and social media piling on the pressure to look good, it’s little surprise that many women are teetering on the brink when it comes to their physical and mental health. In fact, according to research by Sanctuary Spa, a staggering 12m women feel they're about to burn out, four out of five women say they put too much pressure on themselves to be perfect and 80 per cent don't feel good enough. In light of the findings, the iconic spa brand created a video with advice from older women who believe they know the importance of appreciating life’s precious moments - and it is sure to make every modern woman re-think her hectic lifestyle. Sanctuary release new campaign: Relax, Breathe & #LetGo Loaded: 0% Progress: 0%