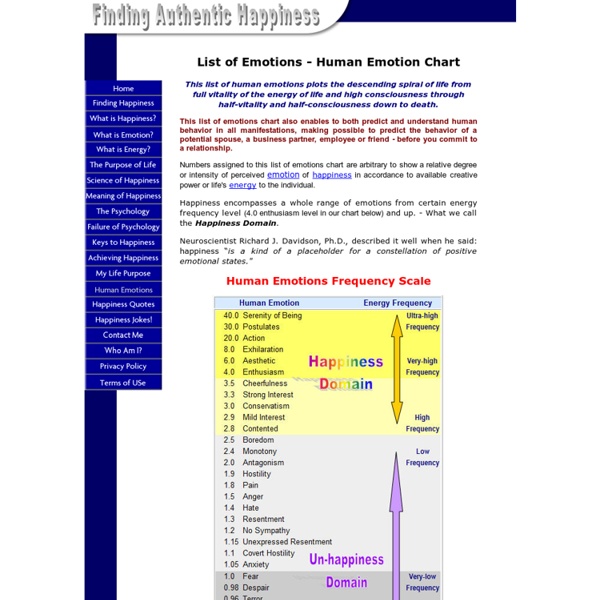 This list of human emotions plots the descending spiral of life from full vitality of the energy of life and high consciousness through half-vitality and half-consciousness down to death. This list of emotions chart also enables to both predict and understand human behavior in all manifestations, making possible to predict the behavior of a potential spouse, a business partner, employee or friend - before you commit to a relationship. Numbers assigned to this list of emotions chart are arbitrary to show a relative degree or intensity of perceived emotion of happiness in accordance to available creative power or life's energy to the individual. Happiness encompasses a whole range of emotions from certain energy frequency level (4.0 enthusiasm level in our chart below) and up. - What we call the Happiness Domain. Neuroscientist Richard J. Davidson, Ph.D., described it well when he said: happiness “is a kind of a placeholder for a constellation of positive emotional states."

Faces of Product Pleasure: 25 Positive Emotions in Human-Product Interactions Faces of Product Pleasure: 25 Positive Emotions in Human-Product Interactions Pieter M. A. The Search for Basic Emotions Table of Contents Before reading this you might want to explore your own emotions. One way to help a person do this is to study this web page: Understand, Identify Release Your Emotions. Recognize these emotions The Passion and Reason 15 The book Passion and Reason provides clear definitions and descriptions of 15 separate emotions. These are: Anger — Conspecific threat, trespass, loss attributed to an agent, unjust insult, thwarted goals, plea for justice Envy — Desiring other's stature objects Jealousy — Threat to sexual access.

Betrayal Betrayal traumatizes your body, heart and mind. It cracks open the defenses we have built to both the infantile and existential traumas built into our human nature. The overwhelm produces a massive emotional crisis, a make-or-break event. Tree of life The tree of knowledge, connecting to heaven and the underworld, and the tree of life, connecting all forms of creation, are both forms of the world tree or cosmic tree, according to the Encyclopædia Britannica,[2] and are portrayed in various religions and philosophies as the same tree.[3] Religion and mythology[edit] Various trees of life are recounted in folklore, culture and fiction, often relating to immortality or fertility. They had their origin in religious symbolism. Ayyavazhi[edit] In Akilathirattu Ammanai, the source of the Ayyavazhi Mythology, life is considered as an Asura, a power-seeking entity which evolved from nature and survives by getting its energy from nature through offerings, boons from the supreme God-head Siva.

Test your social intelligence Social Intelligence Test Test how well you can read emotions of others just by looking at their eyes. The ability to read the emotions of others is linked to "social intelligence" which, in turn, is linked to performance on team-based problem solving tasks. The test typically takes 10 minutes to complete. This test requires a laptop or a tablet. It will not work on a phone. Contrasting and categorization of emotions The contrasting and categorisation of emotions describes how emotions are thought to relate to each other. Various recent proposals of such groupings are described in the following sections. Contrasting Basic Emotions[edit] The following table,[1] based on a wide review of current theories, identifies and contrasts the fundamental emotions according to a set of definite criteria.