I watch therefore I am: seven movies that teach us key philosophy lessons 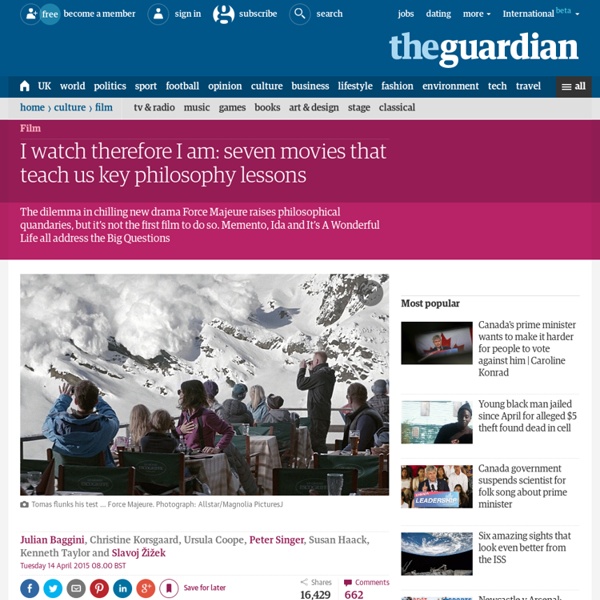 How can we do the right thing?Force Majeure If you had lived in Germany in 1939, would you have helped protect Jews or gone along with their systematic extermination? If you had been an MP 10 years ago, would you have milked your expenses for what they were worth? And if you and your family faced a threat, would you protect them or save yourself? We all like to think that in such situations our basic decency would shine through, but we can never know. In the aftermath, several characters try to excuse him. Aristotle’s insight was that we rarely have the time or opportunity to sit down and think about what the best thing to do is before acting. We can pretend that Tomas just had a moment of madness where his primal survival instinct took over, but his wife, Ebba, knows better, and so do we. Force Majeure tells us what Aristotle knew: unpredictable events happen, random “acts of God” for which no one is responsible. Julian Baggini’s Freedom Regained, is published by Granta, £14.99.

50 Questions To Help Students Think About What They Think click 2x contributed by Lisa Chesser Using the right questions creates powerful, sometimes multiple answers and discussions. Aristotle said that he asked questions in response to other people’s views, while Socrates focused on disciplined questioning to get to the truth of the matter. Socialising in pubs ‘boosts mens’ mental health’ MEN now have the perfect ­excuse to sneak off for a crafty pint with their mates – ­research has found that going down the pub can be good for their mental health. The study revealed that men drinking with friends in the pub reported positive effects on their mental wellbeing, allowing them to open up and talk about their emotions – traditionally a masculine ­taboo in Scotland. Sharing a round of drinks also helped them look out for each other and lift their spirits, according to research in the West of Scotland. But the study also acknowledged the dangers that buying rounds encouraged men to perhaps drink more, with many of those questioned consuming harmful or hazardous amounts of alcohol.

How to improve your Critical Thinking skills: Interview with Dr. Gerald Nosich – Life Lessons In this article I interview an expert on Critical Thinking, Dr. Gerald Nosich from the Foundation for Critical Thinking, who has been teaching Critical Thinking since 1977 to find out how we can improve our Critical Thinking skills. In this article you will learn: Let’s start at the beginning… Michael: What is Critical thinking? Social isolation shortens lifespan Westend61/Getty Older people reap physical and emotional benefits from social interaction. Scientists have long known that both social isolation and feelings of loneliness can increase risk of illness and death in people. But it has been less clear whether isolation, which can lead to loneliness, undermines health, or whether either factor, acting alone, can harm well-being. Today, researchers report in the Proceedings of the National Academy of Sciences that limited contact with family, friends and community groups predicts illness and earlier death, regardless of whether it is accompanied by feelings of loneliness1. The scientists analysed data from 6,500 people aged 52 and older enrolled in the English Longitudinal Study of Ageing, which monitors the health, social well-being and longevity of people living in England.

Misattributed quotes and their surprising originators In the course of researching the history of emotional intelligence, I stumbled across an origin story that went all the way back to Plato. The classical Greek philosopher apparently wrote, “All learning has an emotional base.” Except that he never said it, according to Christopher Golis, a coach specializing in emotional intelligence. Instead, Golis’s digging unearthed no attribution to Plato before 1997, “after which it’s copied promiscuously in various inspirational/psychological books–never with source identification–and then on to various quotation websites.” Facebook Makes People More Unhappy and Lonely, Study Sep 14, 2013 08:07 AM EDT By Stephen Adkins, UniversityHerald Reporter Facebook, the social networking website was created to enhance global communication. However, it is now causing more loneliness and reducing satisfaction and happiness among users, according to a study conducted by researchers from the University of Michigan. Like Us on Facebook Researchers claimed that the site is having a negative impact on people's interactions and perception about oneself.

Culture - International Women’s Day: Iconic images of women protesters Swedish photographer Hans Runesson captured this moment on 13 April 1985 – and his image has endured since, voted Picture of the Century and resurfacing on social media in 2016 with the call to arms: “Be the woman hitting a neo-Nazi with a handbag you wish to see in the world”. Taken in Växjö, Sweden during a demonstration by the neo-Nazi Nordic Reich Party, the photo shows 38-year-old Danuta Danielsson swiping at one of the marchers with her handbag. The Polish-Swedish passerby, whose family members had reportedly been sent to a Nazi concentration camp, snapped “impulsively”, according to Runesson, who told BBC Culture that the man did “nothing – he walked further” afterwards. Despite the incident happening in a fleeting instance, the photo continues to resonate for many as a silent rallying cry. And it had an eerie parallel in 2016, when social activist Tess Asplund placed herself in the path of protesters from the Nordic Resistance Movement in Sweden.

Love letters and kindness may improve mental health 22 March 2013Last updated at 21:11 ET By Lorna Stewart Health Check, BBC World Service "You matter to me. In a way I cannot explain, you matter to me. Why Are We Still Teaching Reading the Wrong Way? Our children aren’t being taught to read in ways that line up with what scientists have discovered about how people actually learn. It’s a problem that has been hiding in plain sight for decades. According to the National Assessment of Educational Progress, more than six in 10 fourth graders aren’t proficient readers. It has been this way since testing began. A third of kids can’t read at a basic level. How do we know that a big part of the problem is how children are being taught?

Magic mushrooms may help with PTSD Magic mushrooms, those cultural symbols of trippy hippie awareness, may be in for a new reputation. Researchers from the University of South Florida have discovered that low doses of the psychedelic drug may help treat people suffering from post-traumatic stress disorder, anxiety and addictions. It was a shroomy, serendipitous discovery they didn’t set out to find. It started with psilocybin, the psychedelic ingredient found in certain mushrooms. Juan Sanchez-Ramos, a professor of neurology at USF, wanted to see how the substance affected short-term memory and learning. Sanchez-Ramos and his colleagues thought it might speed learning, maybe one day helping people who, for instance, had lost cognitive function to chemotherapy.

A Dark Consensus About Screens and Kids Begins to Emerge in Silicon Valley SAN FRANCISCO — The people who are closest to a thing are often the most wary of it. Technologists know how phones really work, and many have decided they don’t want their own children anywhere near them. A wariness that has been slowly brewing is turning into a regionwide consensus: The benefits of screens as a learning tool are overblown, and the risks for addiction and stunting development seem high.