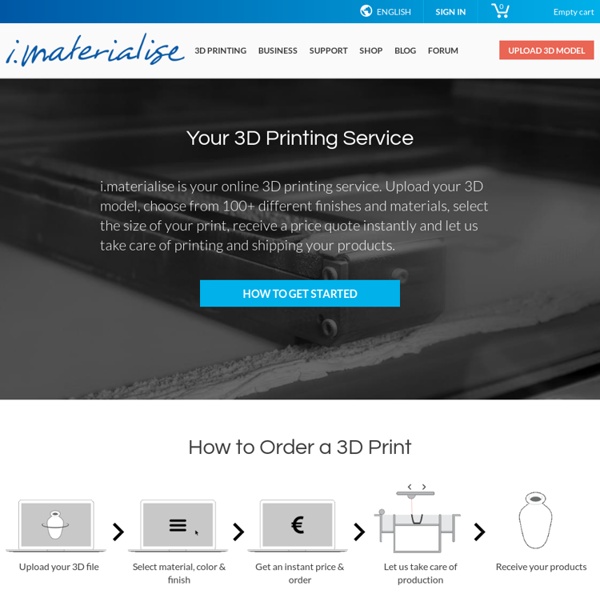 Visual thinking Visual thinking is a way to organize your thoughts and improve your ability to think and communicate. It’s a way to expand your range and capacity by going beyond the linear world of the written word, list and spreadsheet, and entering the non-linear world of complex spacial relationships, networks, maps and diagrams. It’s also about using tools — like pen and paper, index cards and software tools — to externalize your internal thinking processes, making them more clear, explicit and actionable. Why is visual thinking important? Free professional wind turbine blade Build the prototype of a wind turbine blade with fiber glass, cardboard, software, tools and affordable or free materials. Beware my friend, it's a loooong and detailed instructable since professional wind turbine have many parameters to take in account. After that we'll jump, and backflip like ninjas with file formats to land in 123D Make and finally build this blade.

Open source filament maker Plans now available for the Filabot Wee You might remember Tyler McNaney’s Filabot, the personal filament maker, we featured earlier in the year that about his Kickstarter campaign to raise money for development costs. The machine is designed to recycle plastic waste into filaments for use in 3d printing. The Filabot team are striving toward a closed loop plastic recycling alternative for hobbyist desktop 3D printers which use plastic filament for fused deposition modeling, such as Makerbot’s printers. While design studio Cunicode have proved that failed 3D prints can be interesting and beautiful. The EX¹ - rapid 3D printing of circuit boards by Cartesian Co. Follow us on Facebook and Twitter for live updates. Check the updates tab above for more cool stuff! The Cartesian Co. printer EX¹ transforms electronics and prototyping in the same way that 3D printing has made things possible that were inconceivable even 5 years ago.

The LaTeX project public license Current version of the LPPL The LaTeX project public license is a free software license. The most recent version of the LPPL is version 1.3c. Best RGB LEDs for any project (WS2812) When we're working with LEDs, we often like to control their state (on/off), brightness, and color. There are many, many different ways of going about this, but none are as compact a solution as the WS2812 RGB LED. In its tiny 5mm x 5mm package, the WS2812 includes 3 super bright LEDs (Red, Green, and Blue) and a compact driver circuit (WS2811) that only requires one data input to control the state, brightness, and color of the 3 LEDs. At the expense of needing only one data line to control 3 LEDs, there comes a demand for highly precise timing in the communication with the WS2811. For this reason, a real-time microcontroller (e.g., AVR, Arduino, PIC) is required.

A brief review of the 3D printers of 2012 The avalanche of popular news stories has propelled 3D printing into the minds of consumers. However, the major manufacturers of 3D printers have released a number of systems for professional uses. Here’s a quick look at what became available this year. A number of technical advances are demonstrated by this year’s new 3D printing systems.

The Buccaneer® - The 3D Printer that Everyone can use! by Pirate3D Inc Manufacturing timeline and Stretch goals sections are at the very end for those who just want to go there. FAQ is also at the back, do check it out in case the questions you have are already answered there. Hi everyone! We have had many requests to see the internals of our 3D printer while it is printing. We ripped out the mechanics from our final casing and placed them into our prototype casing (which is transparent) for all of you to see! Wohlers Associates - Terry Wohlers Terry WohlersShort Biography Industry consultant, analyst, author, and speaker Terry Wohlers is president of Wohlers Associates, Inc., an independent consulting firm he founded 27 years ago. The company provides technical and strategic consulting on the new developments and trends in rapid product development, additive manufacturing, and 3D printing. Through this company, Wohlers has provided consulting assistance to more than 240 organizations in 24 countries. Also, he has provided advice to 150+ companies in the investment community, most being institutional investors that represent mutual funds, hedge funds, and private equity valued at billions of dollars. For 30 years, Wohlers has focused his education, research, and practice on design and manufacturing.