What’s Going on Inside the Brain Of A Curious Child? 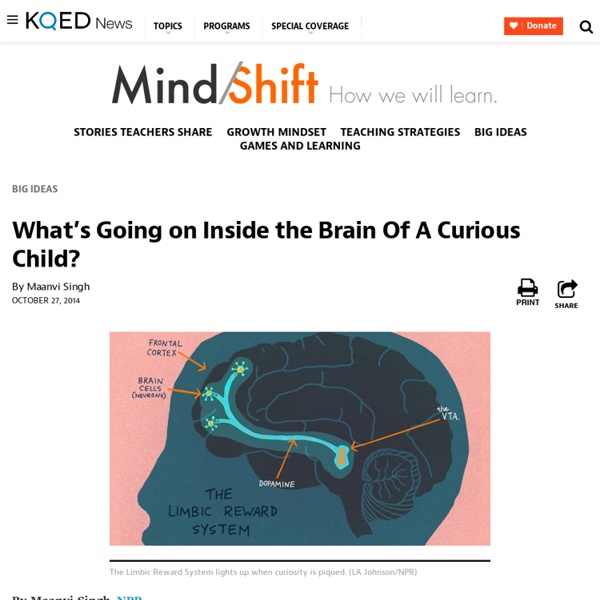 By Maanvi Singh, NPR How does a sunset work? We love to look at them, but Jolanda Blackwell wanted her 8th graders to really think about them, to wonder and question. So Blackwell, who teaches science at Oliver Wendell Holmes Junior High in Davis, Calif., had her students watch a video of a sunset on YouTube as part of a physics lesson on motion. “I asked them: ‘So what’s moving? And why?'” Once she got the discussion going, the questions came rapid-fire. Students asking questions and then exploring the answers. Blackwell, like many others teachers, understands that when kids are curious, they’re much more likely to stay engaged. But why? Our Brains On Curiosity “In any given day, we encounter a barrage of new information,” says Charan Ranganath, a psychologist at the University of California, Davis, and one of the researchers behind the study. Ranganath was curious to know why we retain some information and forget other things. Curiosity Helps Us Learn Boring Stuff, Too

16 Guidelines 16 Guidelines “I have been implementing the 16 Guidelines in our classroom over the past three years. During this time, I have noticed that the children’s emotional and social awareness has been greatly enhanced. They have become more aware of their daily interactions with their peers and can often be heard reminding one another of the Guidelines through out the day.” - Linda Manazzone, early school educator, McMaster Children’s Centre preschool program, Ontario, Canada The 16 Guidelines programme provides a simple, robust and flexible framework for developing empathy, compassion and resilience in daily life, suitable for both educational curricula and for personal and professional development.

How to Use Anchor Charts in Your Classroom You see them all over Pinterest. You see them all over our WeAreTeachers Facebook page. You might even see them in the classroom next door. How Does the Brain Learn Best? Smart Studying Strategies In his new book, “How We Learn: The Surprising Truth about When, Where, and Why It Happens,” author Benedict Carey informs us that “most of our instincts about learning are misplaced, incomplete, or flat wrong” and “rooted more in superstition than in science.” That’s a disconcerting message, and hard to believe at first. But it’s also unexpectedly liberating, because Carey further explains that many things we think of as detractors from learning — like forgetting, distractions, interruptions or sleeping rather than hitting the books — aren’t necessarily bad after all.

Chart: How Inside Out's 5 emotions work together to make more feelings Very, very mild spoilers for Inside Out follow. An important part of the climax of Pixar's wonderful new film Inside Out involves the realization that all of our emotions are important, that feeling sad can be just as crucial as feeling happy, no matter what others might tell you. But the movie also reveals that as we get older, our emotions begin to blend together into newer, more complicated feelings. Early in the film, Riley — the 11-year-old girl whose mind serves as Inside Out's primary setting — is largely defined by very primal feelings. She's either all joy or all sadness.

Do No Harm: Flexible and Smart Grading Practices My Edutopia post When Grading Harms Student Learning generated a lot of buzz. Grading is an emotional subject, with strong-held opinions and ideas. I was really excited to see discussion on all sides of the issue. The best feedback for me was that, while many readers agreed with parts of the premise, I hadn't been specific on support strategies. Thank you for that feedback -- it was specific, actionable, and created the need and excitement for a follow-up post. Why Slowing Down Stimuli to Real Time Helps a Child’s Brain By Eric Westervelt, NPR Our “Tools of the Trade” series is taking a look at some of the iconic objects that form a vital part of our educational lives. For an upcoming piece, I’m reporting on how young children learn through that most basic of preschool education tools: simple wooden blocks. Dr. Dimitri Christakis has done done extensive research on blocks and play and lectured on media and children. He is the Director of the Center for Child Health, Behavior and Development at Seattle Children’s Research Institute.

School's trade project will help Nepal Last updated 10:31, June 9 2015 Rose Cawley / Fairfax NZ The With One Loaf kids now want to sell their sleepout and put the money towards building houses in earthquake stricken Nepal. From left: Felix Allanson, Deklan Matangaro, Rose Bennett and Lotta McNamara. The Teacher Curse No One Wants to Talk About Knowledge is a curse. Knowing things isn't bad itself, but it causes unhealthy assumptions -- such as forgetting how hard it was to learn those things in the first place. It's called the Curse of Knowledge. In this post, we'll identify how the Curse of Knowledge affects educators.

Teachers tap into brain science to boost learning JUDY WOODRUFF: Next: neuroscience and education. Thousands of teachers around the country are learning about an alternative teaching program that aims to use scientific discoveries about the brain to improve the way children learn in the classroom. Special correspondent John Tulenko of Learning Matters reports from Philadelphia. Gill Hicks (England) - Forgiveness Project Photo by Brian Moody On 7th July 2005, 52 people died and many were severely injured and maimed, by suicide bombers attacking London’s transport system. On a Piccadilly line underground train between Kings Cross and Russell Square stations, Australian-born Gill Hicks miraculously survived but lost both her legs due to the explosion. Gill’s memoir, One Unknown, was published in 2008.

What Makes a Genius? This story appears in the May 2017 issue of National Geographic magazine. The Mütter Museum in Philadelphia houses an array of singular medical specimens. On the lower level the fused livers of 19th-century conjoined twins Chang and Eng float in a glass vessel. Nearby, visitors can gawk at hands swollen with gout, the bladder stones of Chief Justice John Marshall, the cancerous tumor extracted from President Grover Cleveland’s jaw, and a thighbone from a Civil War soldier with the wounding bullet still in place. 10 Dangerous Myths Every Educator Should Know About The Brain If you think kids can’t get better in school, then you think brains have minimal capacity for change. But they are actually changing ALL the time. If a child spends the summer relaxing, watching television or wandering in a mall, your child is likely to experience some brain atrophy. Remember, the brain responds to environmental input.