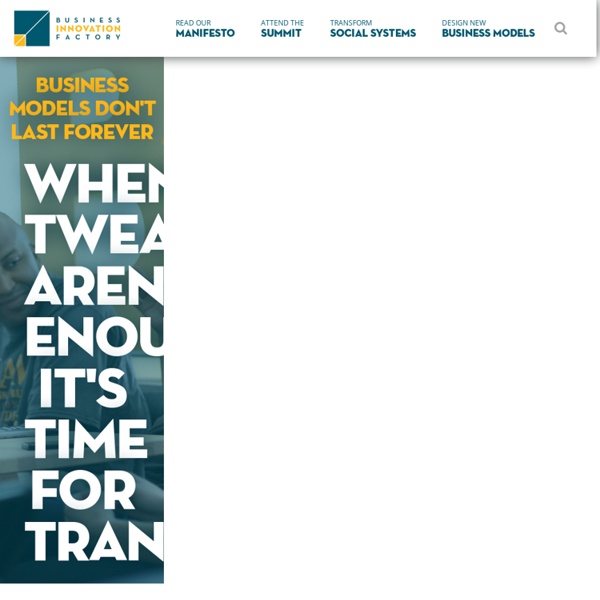 Why Failure Drives Innovation This essay was written by Baba Shiv, Sanwa Bank, Ltd. Professor of Marketing at the Stanford Graduate School of Business Failure is a dreaded concept for most business people. But failure can actually be a huge engine of innovation for an individual or an organization. The trick lies in approaching it with the right attitude and harnessing it as a blessing, not a curse. I’ve coined two terms that describe how people view failure: the type 1 mindset, and the type 2 mindset. Temple SmallBizU The Temple University Small Business Development Center provides exceptional training opportunities for start-up and existing business owners. Take advantage of the free or nominally priced educational programs. Classes are available in the following areas:

Social Sunburst - An Innovative Platform for Crowdsourcing and Crowdfunding Social Outcomes Interested in learning more about Social Impact Investing? Social Sunburst seeks partners and collaborators, in particular in the Pittsburgh area. Contact us today. At Social Sunburst we believe that anyone can become a Social Champion. Our platform makes it easy to join like-minded people in supporting social outcomes or even championing one of your very own.

Patents What is a patent? A patent is an intellectual property right granted by the Government of the United States of America to an inventor “to exclude others from making, using, offering for sale, or selling the invention throughout the United States or importing the invention into the United States” for a limited time in exchange for public disclosure of the invention when the patent is granted. There are three types of patents. Utility patents may be granted to anyone who invents or discovers any new and useful process, machine, article of manufacture, or composition of matter, or any new and useful improvement thereof. Here is the process for obtaining a utility patent. Design patents may be granted to anyone who invents a new, original, and ornamental design for an article of manufacture.

Darden Speaker Series This series features speakers who have visited Darden as part of the Darden Distinguished Speaker Series (DDSS), the Darden Leandership Forum (DLF), and the 50th Anniversary Speaker Series. The speaker series brings top-level corporate, government, and industry leaders to Darden to discuss current business issues and trends, and their individual leadership philosophy. These guest speakers represent a variety of experiences, industries and geographical regions, but all share a similar commitment to the core values consistent with the Darden mission: to better society by developing leaders in the world of practical affairs. Subscribe to this series of podcasts: A GOOD Experiment A year ago, I came to GOOD to help the company with its effort to establish a community, rather than just an audience. As I saw it, GOOD's view—once controversial—that living well and doing good weren't mutually exclusive, had become part of the mainstream. How could GOOD take the next step and translate that into impact? How to accomplish impact certainly isn't obvious.

Patent Overview A patent is essentially a limited monopoly whereby the patent holder is granted the exclusive right to make, use, and sell the patented innovation for a limited period of time. The U.S. Patent Act, 35 U.S.C. §§ 1 et seq., was enacted by Congress under its Constitutional grant of authority to secure for limited times to inventors the exclusive right to their discoveries. See Article I, Section 8, Clause 8. Granting exclusive rights to the inventor is intended to encourage the investment of time and resources into the development of new and useful discoveries. New Consumer Bill of Rights The original work done by John F. Kennedy on the Consumer Bill of Rights was a towering achievement and it was never our intent to start from scratch. In fact, it was our intent to change the original as little as possible while still expanding and updating the rights. Most changes are less of an oversight or lack of vision by the original drafters, and more to cover changes to the consumer landscape that in 1964 did not exist.